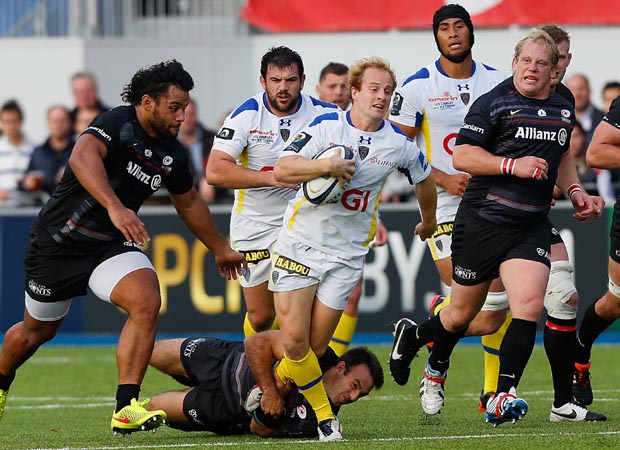 Europe’s in-form full-back Nick Abendanon has questioned the rationale behind England’s policy of  selecting overseas-based players only in ‘exceptional circumstances’, and admits winning more England caps remains his “ultimate goal”.
Twice-capped Abendanon has also told how England boss Stuart Lancaster and Bath staged a last-minute bid to stop his summer move to Clermont Auvergne.
Abendanon, who has been nominated for European Player of the Year after running riot in the pool stages of the European Champions Cup, announced last February that he would leave Bath for Clermont at the end of the season.
But as late as mid-May, the summer move was in the balance after Lancaster and Bath chairman Bruce Craig instigated a pincer movement to try to keep the fleet-footed sweeper in the Premiership.
Lancaster told Abendanon he was back in contention for an England spot – but when he said he was unable to offer him a firm place on the tour of New Zealand, Abendanon opted to complete his move to the Top 14.
Abendanon, who set a club record at Bath by being named Players’ Player of the Year for three consecutive seasons, admits it was an agonising decision to make.
“Stuart had been on the phone because my form had been pretty good with Bath towards the end of the season,” said Abendanon. “He said if I did stay then my England chances were definitely still there.
“Stuart had been speaking to Bruce and (Bath head coach) Mike Ford and then came to the club. I had a sit down with him to gauge how real the whole thing was.
“I needed something more solid from Stuart. There was the England tour and I said, ‘take me to New Zealand and I’ll stay’, but he couldn’t say he could do that.
“I had an amazing opportunity to go to a great club in France. There were no promises involved if I stayed in England – it would just be on hope. And I would basically have been relying on a few injuries for the recall to happen.
“Maybe I was a bit annoyed with not having been selected in the past for England since 2007. I feel I’ve been a little let down by national selections.”
Abendanon finally deciding to stick with his French move on the eve of Bath’s end of season awards dinner.
“There were lots of sleepless nights. Even now my ultimate aim is to try and get more caps.”
Abendanon’s electrifying form in both Europe and the Top 14, coupled with the revelations about Lancaster’s bid to keep him in England, are likely to intensify debate about the wisdom of the RFU’s directive of  picking overseas-based players only in ‘exceptional circumstances’.
Following the pool stages of the European Challenge Cup, counter-attacking maestro Abendanon has made more metres with ball in hand than any other player.
Another nominee, Toulon’s England-capped back-rower Steffon Armitage, tops the turnover charts.
While appreciating some of the thinking behind the RFU’s Premiership-centric directive, 28-year-old Abendanon believes it has its flaws.
“I totally understand why they’ve got it – to keep players in the country. But I look at my team-mate at Clermont Jonathan Davies and he’s got it written into his contract that he can be released at any time for Wales, so I don’t think there would be a problem getting to England training camps while playing in France.
“One of the reasons they have the restriction is because they think you can earn so much more money in France. But I don’t believe that is the case nowadays.
“From what I hear, if you’re a big international player then you’re probably better off finance-wise staying in England.
“I don’t think it’s that big a deal if you want to play in France. The standard is just as high, if not higher, week-in week-out. It’s not as if you’re not getting game time.
“If I carry on with the form I’ve shown in the Top 14 and the European Cup then I’d still love to think I could do what they talk about with Steffon and get involved with the World Cup. But that’s out of my hands. I’ve just got to keep playing well.”
TOM BRADSHAW