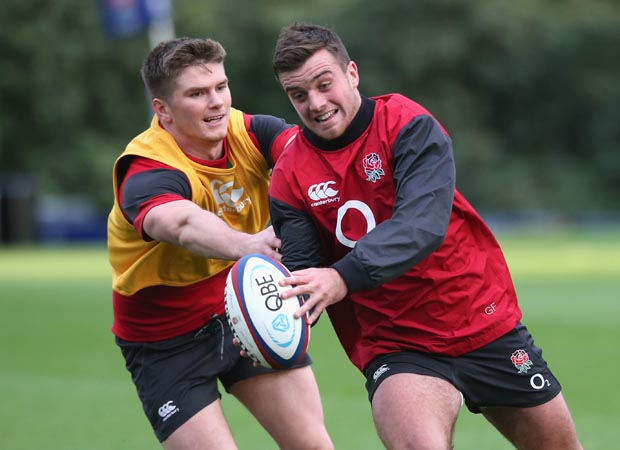 Wasps fly-half Andy  Goode has mounted a staunch defence of under-fire England fly-half Owen Farrell, insisting he remains an “integral part of the England set-up”.
But he has questioned boss Stuart Lancaster’s decision to pick the Saracens playmaker in such a pivotal role with so little match action behind him.
Farrell, who started last night’s game against Samoa at inside-centre, was criticised for his displays in the defeats to New Zealand and South Africa.
But former England man Goode told The Rugby Paper: “You’ve got to feel for Owen because everyone’s pointing the finger and blaming everything on him.
“Owen knows he didn’t perform as well as he’d have liked but the reality is he’d played just 80 minutes of rugby before starting against the All Blacks.
“People jumped on his back but as a 10 you need a good spell of games behind you to be match-sharp and to be making good decisions on the hoof. New Zealand and South Africa play at tremendous pace so you’ve got much less time.
“It’s not Owen’s fault he got picked. If you get picked by England you play – every player wants to do that. Stuart Lancaster’s the boss and the buck stops with him. Owen hadn’t played much rugby but was rushed back in when he didn’t look sharp.”
Goode believes England’s back-line problems – in particular the absence of Manu Tuilagi – have made life harder for their playmakers.
He explained: “We’re not winning the collisions and we’re missing Manu a lot. If you’re not getting over the gain-line, as a 10 it’s very hard to shape a game.
“It’s difficult when you’re playing off slow, back-foot ball and then all of a sudden every fan in the world expects the 10 to produce a miracle moment. But I’ve played the game long enough to know it’s been a tough two games for Owen.
“George Ford deserves his chance, but Owen’s still an integral part of that England set-up. He just needs to get a good run of games with Saracens to be firing on all cylinders for the Six Nations.”
There have been calls for Danny Cipriani to be restored to England colours, but Goode fears time is running out for the Sale man to stake a claim.
He added: “It’s very tough for Cips now. Owen and George are one and two, with Stephen Myler rated three.
“Cips has been playing some good stuff and everyone’s been talking about his consistency. He’s certainly got that X-factor England need.
“But Stuart Lancaster’s big on culture and everyone has to fit in.
“Cips has obviously worked at that part of his game and personality and did enough to get on the tour in June – and did quite well. But the clear hierarchy is Farrell, Ford and Myler, so it’s going to be hard for guys like Cips and Freddie Burns.”
NEALE HARVEY