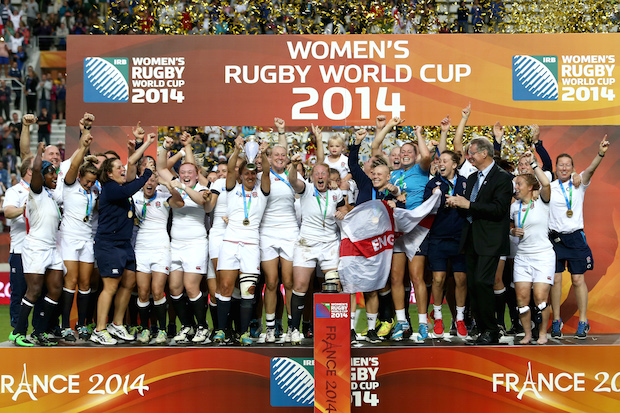 England Women have been crowned world champions after beating Canada 21-9 in the final of the Women’s Rugby World Cup in Paris.
Tries from Danielle Waterman and Emily Scarratt gave England their first tournament win since 1994, while Scarratt also added 11 points with the boot.
Head Coach Gary Street said: “I feels a bit like a dream, it’s quite surreal and I think I’ll wake up in a minute! It’s a pretty amazing feeling and I’m just so proud of everyone involved – it’s a really special group, we’ve been on a long journey but to have that trophy makes it worthwhile.
“The support we’ve had has been amazing and it’s a huge relief to be able to deliver. Huge credit to Canada as well – I thought that they were excellent and made it extremely tough for us.”
Captain Katy Mclean added: “We have massive respect for Canada, we had to work so hard today but our group of girls and all of the staff deserve this win. A lot has gone into this win, so many rugby heroes have gone before us and not won, so this win is for them as well, and the English rugby family.”
It was Scarratt who got the scoring underway, and after her early penalty England almost had the opening try with 20 played when Hunt made a brilliant quick break, but the Lichfield No. 9 was held up just over the line.
Scarratt’s second penalty made it 6-0 and it wasn’t long before England did cross the whitewash. The ball was passed through the hands and after Tamara Taylor’s smart dummy, Maggie Alphonshi found Waterman who went over in the corner.
Canada got onto the board on the stroke of half-time through the boot of IRB Player of the Year Magali Harvey to make it 11-3, and Harvey was again on hand with her second penalty early in the second 40 to reduce the deficit to five points at 11-6.
Harvey scored her third penalty from distance after 58 minutes to make it 11-9, but England came straight back, and from the restart Scarratt restored England’s five-point lead.
With five minutes to play Scarratt put the game to bed with a brilliant individual try – barging her way through the Canadian defence to score, and she added the conversion to make it 21-9 which is how it stayed.