Hot-head? I’m never out of control!

Posted on 22nd February 2019 by admin in Features, Nick Cain 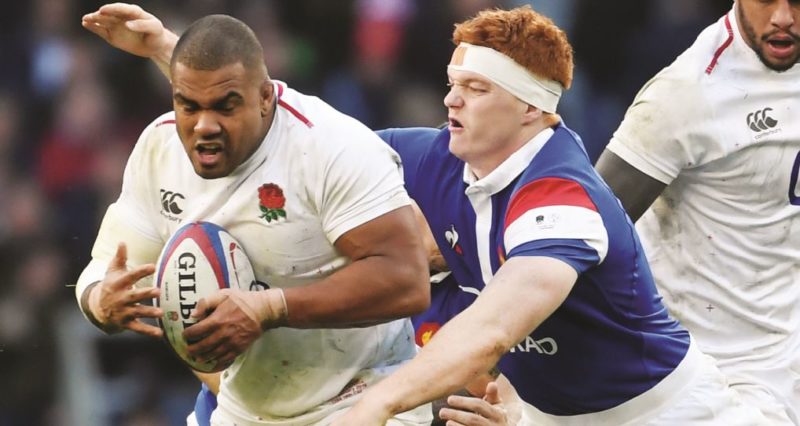 Kyle Sinckler says he is ready to rumble when England face Wales in Cardiff this weekend – and much of that is down to some great Welsh coaching!

Sinckler says he is improving all the time, a bold mission statement from a 25-year-old England tight-head who, because of his reputation for volatility, will have the weight of the world bearing down on him over the next seven days.

The pressure on Sinckler will be manifest not just in the build-up to Saturday’s season-defining Six Nations clash – with Wales coach Warren Gatland not averse to snagging opponents with psychological barbs – but more crucially when he gets down to the bone-on-bone crunch of forcing the Welsh forwards to yield ground.

Whether the Harlequins hard-case who was raised on a council estate in Tooting can back up his claims will go a long way to setting the tone for what promises to be a monumental battle of physical and mental strength.

However, Sinckler has a trump card given that he has been coached at the Stoop for the last couple of years by Wales and Lions prop star Adam Jones. The “Hair-Bear” is one of a handful of Welsh players who have won three Grand Slams – and he can also claim to have put the kibosh on an English Slam as the scrum wrecker-in-chief in the 30-3 record Welsh victory over Stuart Lancaster’s side in Cardiff in 2013.

Sinckler swears that the scrummaging gains he has made during this Six Nations owe a great deal to the tutelage he has had, with the former Welsh tight-head in the vanguard.

“I have been very fortunate to be around some seriously world class operators. Look at Adam Jones. I don’t think I can describe how influential he has been for me, and my career. He has helped me in terms of just pure set-piece – what normally tends to work for him works for me, because we are similar body shapes and sizes.

“I was fortunate enough to have Graham Rowntree for a few years, and Joe Marler at Quins has also been a massive help for me, especially in my earlier years in terms of keeping my head on, as there are some tough days. They are inevitable, and you can’t really do much about it: so you just have to learn from getting a good drilling by your opposite number.”

The latest twist in that learning curve came last summer on England’s tour of South Africa. Sinckler was part of a pack which committed the scrummaging sacrilege of being forced into conceding a penalty try, when the Springbok front row got the jump on their English counterparts in the second Test in Bloemfontein.

Sinckler’s biggest sin was taking himself out of the contest by standing-up, and giving the referee clear leeway to reward the dominant scrum. There is unlikely to be a repeat slip-up at the Principality Stadium, where he is due to win his 20th England cap.

That is because Sinckler has observed the cardinal rules of keeping his chest down and his back straight in a Red Rose scrum which is back in gear since the Bloemfontein setback.

The Quins prop knows that with Wales on a record-equalling run of 11 consecutive wins – the most recent of them away successes over France and Italy – facing an England side that brought Ireland back to earth with a bump in Dublin before an overwhelming home win over France, it will all be on the line.

After an impressive Autumn series the England pack put down a marker when they held an Irish scrum hailed as the world’s best in check, with Sinckler emerging in credit from his head-to-head with the 85-cap Cian Healy at the Aviva Stadium.

After following that up by putting the squeeze on France, Sinckler is happy to talk all aspects of scrummaging: “Ireland’s scrum is a lot different to other teams, and I was happy with the way we adapted as a pack. If you look at it from a pure stats point of view, (it was) 100 per cent clean ball (for us).

“You Press guys say they are the best pack in the world, and the best front row, but for us there were opportunities there when we could have got some mileage. I am always learning and am still fresh in terms of international rugby – and will get better.”

He provides some insight also into the scrum hazard of the Eddie Jones experiment of putting a wing like Jack Nowell at flanker. “The first scrum of the game with Jack as my flanker (while Tom Curry was sin-binned) was interesting. I don’t know if he’s ready for the back row yet. The policy is that he should never be on the tight side. It was my mistake, I should have called the other flanker, Mark Wilson, to my side of the scrum. So, that’s a learning for me…I should not have packed down.”

Sinckler says he keeps tabs on Tadgh Furlong, the outstanding Irish and Lions starting tight-head who he came off the bench for in all three Tests in New Zealand in 2017, because they are the same age.

“I wouldn’t compare myself to him. He has been playing pretty good rugby, and he was in a situation where Ireland had to play him. He became world class because he works hard, and is in a very good system where they play to his strengths. He is a very good player.

“I would be lying if I didn’t look at him and think I want to emulate that. It takes time, and he is still only on 29/30 caps and is relatively young – but he leads the way in terms of involvements, and ten tackles and ten carries a game. That is something you strive for.”

What Sinckler has in common with Furlong, and with England loose-head Mako Vunipola, who has been ruled out of the rest of the Six Nations by an ankle injury, is explosive ball-carrying.

It is the amalgam of pace, power and subtle shifts of direction – as well as an ability to produce quick ruck ball or short-offloads out of contact – that Sinckler has in his armoury that fractures defences. England coach Eddie Jones hopes that

it will give his forwards the upper hand against a Welsh pack with a mobile front five which will also be looking for leverage in the loose.

It is here that Sinckler voices his vexation at the way some rugby performance statistics can mask, or give a false impression, of how much of a contribution a player makes.

“It is one of my frustrations, that, say, you have got John who has 15 carries and ten tackles. What were the carries like? I can get the ball and just drop to the floor and that counts as a carry. Are you running on to the ball with momentum? Are you drawing a defender? Are you denting the line?

“I would rather have five good carries rather than 15 average ones. My focus is not just making ten carries this week, it is about were the carries effective? Did I manipulate the line? Did I use my hands? Was I running on to the ball? Did I choose the right line?

“I tend to focus on myself. I don’t worry about numbers and stats. I would rather make six or seven effective tackles than 12 ‘soak-up’ tackles. I just focus on that and not pay any real attention to the numbers. I pay attention to how I effect the game and my involvements.”

Just how effective Sinckler can be in the loose was highlighted by his long scoring pass from the base of a ruck to put Henry Slade over for England’s fourth try against France last weekend.

Sinckler says: “I thought it was going to get intercepted at one point! It was a bit loopy. Looking back on it, there was loads of space to the right and I know Sladey wants the ball in his hands quickly so he can do what he does. Thankfully, he finished it.”

Having that degree of dexterity stems from Sinckler playing in the backline when he first swapped football for rugby, setting up a rugby team at Graveney School in Tooting, as well as joining Battersea Ironsides.

He recalls: “Sometimes at Battersea Ironsides, I played wherever because we couldn’t get a full team out on a Sunday.

So, sometimes I would be playing fly-half one minute, and scrum-half or No. 8 the next. I am a big believer in playing what you see.”

What Sinckler sees approaching fast is a great challenge in Cardiff, and he says he cannot wait to get in the thick of it, especially as he only came on for the last knockings when England won there two years ago.

“The Principality is one of the best stadiums I have played at, bar Twickenham. The atmosphere was electric. The Wales national anthem gets the hairs on the back of your neck standing up with the passion from the fans. I remember the coach journey in, and the bus driver took us the wrong way….so we were a bit late for our warm-up. But we were already prepared from the week and knew how to deal with it. I only got 8-10 minutes, but it was a massive game for me and it was pleasing we got the win, with Elliot (Daly) getting over in the corner.”

As for the prospect of barracking from Welsh fans, Sinckler says he is unfazed. “Yeah, it’s pretty hostile as you would expect. You see all the Welsh flags going in and everyone giving you a bit of abuse, which is good fun.”

For a player who got into a tangle with the French blindside Arthur Iturria a week ago, and has a reputation for a short fuse, this sounds a little too good to be true. But Sinckler is having none of it.

“Whatever you guys say, I’m always in control, I always know what I am doing. I’m never out of control. I have to make sure I am in control and I don’t let the emotions get the better of me – but at the same time if you are part of the front row and playing in the forward pack it is always going to be a fine line.”