How Millfield pals pulled Chris Robshaw back from despair after 2015

Posted on 9th October 2020 by admin in Features 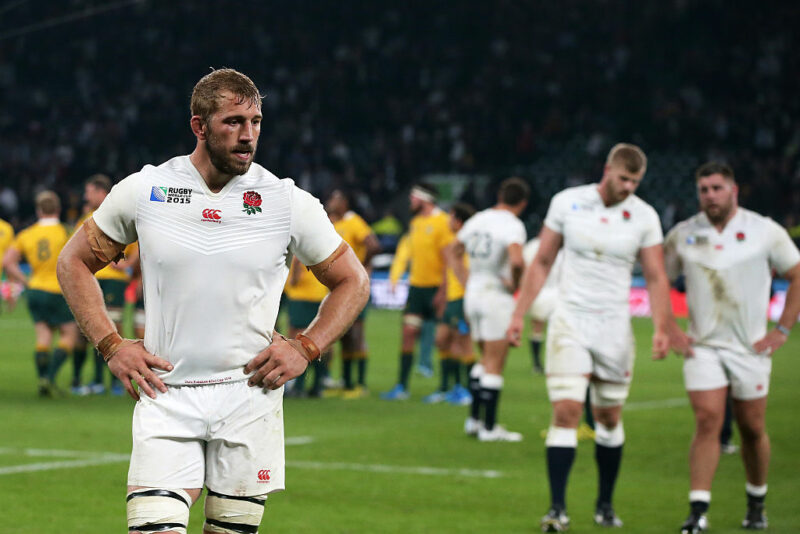 Chris Robshaw had just taken off his jacket as the 2012 Rugby Writers annual dinner moved towards its climax. He relaxed back in his seat and perused the menu listing the past winners of the association’s premier Pat Marshall award for the Player of the Year.

Moments later he was scrambling for his jacket as his name was read out to universal applause.

That’s typical Robshaw, the modest one-club man who led England 43 times, more than any captain apart from Will Carling, and who will today draw to a close 15 years as a pro with Harlequins in his 300th game for the club at Welford Road. As captain of course.

Robshaw’s innate decency and ability to inspire those around him have made him a natural captain from his days as a teenager at Millfield.

The honour has brought him glorious highs – like Quins’ Premiership title success in 2012 – and soul-wrenching lows such as England’s dismal flop on home soil in the 2015 World Cup.

Defeat by Wales in their crucial pool qualification match decreed, of course, that England were the first host nation to fail to progress to the knock-out stages.

A kick at goal from a penalty wide out on the right in the dying minutes could have brought a draw and a reprieve. Instead captain Robshaw opted to go for the corner, the lineout was mangled and the game lost.

Fall-out was brutal. Robshaw revealed: “I went blank behind the eyes. I went to my hotel room and cuddled (his now wife) Camilla and we just cried. There were tears everywhere.”

He adds now: “It was a very tough time, a slow death. Bloggers, ex-players, you guys (the Press). I was suffocated by it.”

What Robshaw has never said, but others close to him know, is that he initially favoured taking that kick at the posts. It was the pragmatic, sensible solution and in fly-half Owen Farrell he had a world class marksman at his call.

Except that Farrell didn’t fancy the kick. He wanted to go for the corner. Robshaw, fatally, relented and took the blows.

Exit England head coach Stuart Lancaster and enter Eddie Jones. The same Eddie Jones who had rubbished Robshaw in print as a six and a half, neither fish nor fowl in the back row.

“I assumed that was me done,” says Robshaw. “I never expected to play for England again.” Instead the Robshaw world span in a remarkable route to redemption.

First, at the behest of Camilla, a tight group of his Millfield friends –lads he had known for 20 years – took him to a converted barn in the Kent countryside.

“We just played daft board games and had a few drinks,” says Darren Clayton who played alongside Robshaw throughout his school years and joined him in the Quins Academy.

“We just wanted to get Robbo away from everything and tell him what we thought of him.”

Robshaw returned to claim two consecutive man of the match awards for Harlequins.

Next Eddie Jones, with a stunning about face, picked him for his Six Nations training camp.

Robshaw says: “On the first day Eddie called me in and we had half an hour behind closed doors. He told me he had a position for me at 6, but he wanted to go in a different direction with the captaincy and appoint Dylan Hartley.

“Eddie was always good to me, very straight talking. I told him I would be hugely supportive of Dylan.”

Together they won the Six Nations Grand Slam. “That was a massive step forward for me,” says Robshaw. “I had just wanted to go out and prove myself as a player again. We had lost the previous three Six Nations on points difference, so this was huge. Winning the Grand Slam had taken so long to achieve and so much effort had gone into it.”

He adds: “Looking back, losing the captaincy was a relief. There’s a lot of pressure. You just wish you could enjoy it a bit more. You think you are at the time…

“That’s why I so wanted to support Dylan. I knew what he would be going through.”

Following the Slam, England went to Australia that summer on a hugely successful tour that saw them claim the series 3-0 and Robshaw earn his 50th cap in the second Test. He was man of the match as well and when RFU president Jason Leonard presented him with his cap the dressing room exploded with applause.

“That was a special moment,” says Robshaw. “It was a bit of closure.” Robshaw keeps his rugby memorabilia tucked away at home, but that silver- embossed cap sits proudly on his mantelpiece, along with the small statuette each member of the team received from the RFU for the Grand Slam.

Robshaw’s 300th Quins cap at Welford Road on Sunday completed an eight-year journey. It was against Leicester that Quins won the 2012 Premiership final at Twickenham.

“That was such an awesome occasion,” Robshaw says. “The week before we went to Abu Dhabi to prepare but it was so hot we couldn’t train after 10.30 in the morning so we spent the time playing golf and swimming.

“Then on the day of the final thousands of fans lined the road from the Stoop to Twickenham cheering us in. We had only won five or ten per cent of our games against Leicester before so there was some party back at the Stoop afterwards with Nick Easter singing his array of bar songs.”

Robshaw was man of the match and crashed over for one of the tries in Quins’ 30-23 triumph.

He reunited with old friends at the Stoop. “I roomed with (Tigers tighthead) Dan Cole throughout my England career. We shared a biscuit and chewed the fat. I know a lot of the guys there of course.”

Robshaw’s powerful, wholehearted exploits in the field – so evident in Monday’s loss to Wasps in his final game at the Stoop – brought offers from France and other Premiership clubs.

But he explains: “I’ve always wanted to win more, to achieve more…but only with Quins. I’ve never pictured myself playing for anyone else. I always thought we would win more than just that 2012 title. I was sure we would push on. When you look at the teams we’ve had and the players, we did not make the most of our potential.”

Now Robshaw will take that drive for success to San Diego Legion in the American Major League.

“I’ve only ever known London in my career,” says Robshaw. “It’s time to try something new. It’s English speaking, there’s the Californian lifestyle. The owner (Darren Gardner) says he’s going to buy me a surfboard even though I’m a bit worried about the sharks…”

One thing he’s not concerned about is the workload. “I’ve played 30 games this season. Over there it will be 18.”

The American season starts in March and runs for seven months. Robshaw, 34, has signed for two years. He will rent his England property and take residence in California with Camilla and Rico, their Affenpinscher dog, otherwise known as a Monkey Terrier.

From now until his departure date in February, he expects to play plenty of golf, spend time with friends and family and generally rest his warrior body.

“It’s all a bit of whirl right now,” he says. “My one big regret is not being able to say goodbye to the wonderful Harlequins supporters at the Stoop… it’s been a hell of a ride.” All may not be lost. As we understand it, when crowds are back and Robshaw is in the country, he will be guest of honour at the Stoop and the cheering can start again.