Posted on 3rd August 2020 by admin in Features, Young Gun 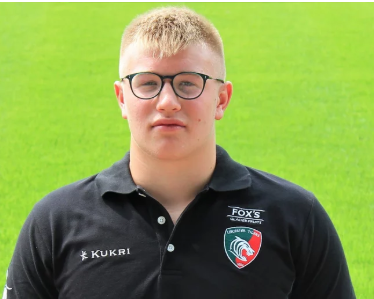 An England U18s starlet who cut his teeth in junior rugby with Melbourne RFC in Derbyshire before coming through the ranks at Ashby RFC over the border in Leicestershire, Vanes could hardly be better placed at Welford Road with the coaching power at his disposal.

Vanes, 19, said: “Steve’s a highly accredited coach who’s operated at the highest level and helped get England to a World Cup final, so to have him to learn from and have him pushing me all the time to get better is brilliant.

“He’s worked with Jamie George and many other top hookers and that’s where I want to be in the next few years, so I’ll make sure I pick his brains all the time and take advantage of the opportunity that’s been presented.”

Borthwick is far from the only decorated individual from whom Vanes can draw inspiration, having last year been mentored by England and B&I Lions star Tom Youngs while co-captaining Tigers to the U18s Premiership title.

“Tom’s still helping me get better by giving me little one-per-centers and everything he says I take on board,” says Vanes. “The best piece of advice he’s given me is to be honest and if you say you’re going to do something, make sure you do it.

“There’s no point saying something if you can’t back it up so although I’ve got my career goals, I’ll keep them to myself for now. The main thing is to take all the opportunities you’re given and make sure you give it 100 per cent.”

Citing all-action Kiwi hooker Codie Taylor as a man he admires, Vanes has a thirst for improvement that would make the workaholic Borthwick purr.

He explained: “I’m working on all areas of my game because you can always get better. The main things I’m working on at the moment are my throwing and scrum and that’s something Boris Stankovich, our scrum coach, is driving home.

“Those are the basics of your game, but beyond that I want to be good in attack and I enjoy defence as well, so I want to be a good all-rounder. Codie Taylor’s a good example and I also keep an eye on Alfie Barbeary, the England U20s hooker at Wasps who is pretty close to my age and is someone I’d like to challenge in future.”

Having starred for England U18s last year, Vanes is certain to be on the national radar for an U20s shot at next year’s Six Nations.

He added: “Mark Luffman, Jim Mallinder and Jonathan Pendlebury coached the U18s last year and helped me a lot. It’s a different environment to Tigers because it challenges your skills against guys you don’t normally play with.

“It’s good to see all the other lads from across the country and gives you an insight of what it might be like with the senior men’s team.”