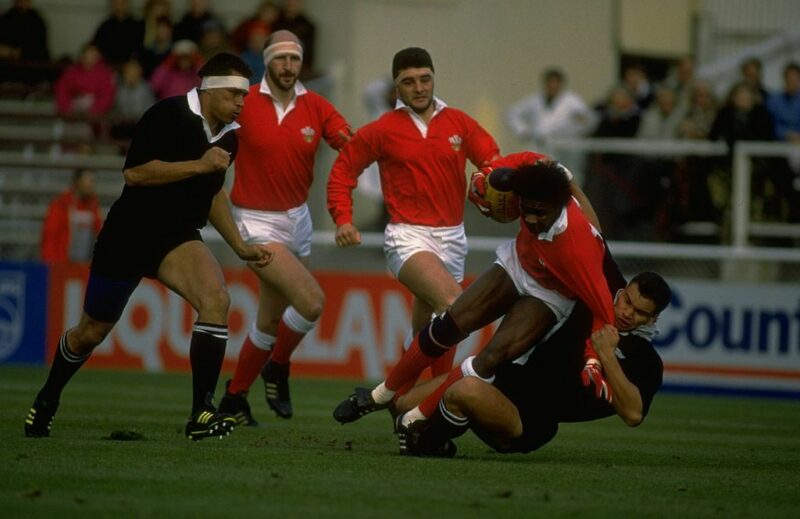 Glenn Webbe has never been one to blow his own trumpet. Had he changed the habit of a lifetime and given it a blast, the sound might have brought the barriers of prejudice tumbling down faster than the walls at Jericho.

In a purely rugby context, his firsts are suitably Old Testament: the first Welsh son of West Indian immigrants from the Windrush Generation to play for his country, the first black British player to score a hat-trick in the World Cup, showing Chris Oti, Jason Robinson and Martin Offiah the way to go.

Neither distinction can ever be taken from him. Nor can others, be they an endearing ability to use humour as a means of defusing racism or a personal history of conflicting decisions prompted by invitations to tour apartheid South Africa at the start and finish of the Eighties.

The first was to join the Wales Youth team on a trip which coincided with the 1980 Lions series. The second, nine years later, was to join other Welsh players on a rebel tour in defiance of their own union’s anti-apartheid policy.

Webbe accepted the first and declined the second. Either way, there was invariably a price to be paid. The first caused his family some grief, the second repaired that damage even if it meant turning down a fee of £32,000 in flagrant contravention of his amateur status.

“I went with Wales Youth against my father’s wishes,’’ he says. “He wasn’t happy but I was 17 at the time. I wanted to see things for myself. I didn’t like some of the things I saw.

“So when the rebel tour came along, I saw it as a chance to make amends with my family and their friends who’d been upset the first time. I didn’t want to offend anyone. I’ve never been a political animal and I didn’t want to rock the boat by making a fuss.’’

In his 2019 autobiography, The Gloves Are Off, shortlisted for the Rugby Book of the Year award, Webbe tells of going to a restaurant in South Africa with some team-mates and being told: “We don’t serve black people here.”

True to form, Webbe dealt with it in his own way. “I didn’t let it get to me and saw the opportunity to laugh at apartheid’s expense,’’ he writes. Asked on his return home about South Africa, he said:

“Well, they talk about racism but I thought they treated me really well. They gave me my own bus to go back and forth to games, I had my own little outhouse behind the hotel and they always made sure I had a table to myself when we were eating.”

On the subject of the South African Rugby Union hiring ‘a band of mercenaries’ for the rebel tour, he writes: “There was a lot of money on the table, £32,000 a head and quite a few of my friends were on the trip.

“The pressure placed on my family was far worse this time around. I chose not to go. I decided on a personal level that it would be wrong to go. I did it out of respect for other people’s feelings.

“Within the black community a lot of people were saying that I was wrong to go the first time and had been disloyal. If anyone had been slighted or wronged, I had a chance to put that right.’’

Those who did go included Test Lions like Robert Jones and Bob Norster. An exhaustive investigation carried out by an independent chairman, Vernon Pugh, led to the overthrow of the WRU general committee but the players denied being paid and carried on as bona fide amateurs.

By then Webbe had turned down a similar amount of money to play Rugby League. An admission that he had talked to officials from Warrington would have been sufficient for him to have been banned for life, even if he had chosen to remain an amateur with Bridgend.

That he could have been kicked out for taking no money while team-mates could pocket a hefty five-figure illicit sum and continue as though nothing had happened illustrated the utter hypocrisy of the Union Establishment.