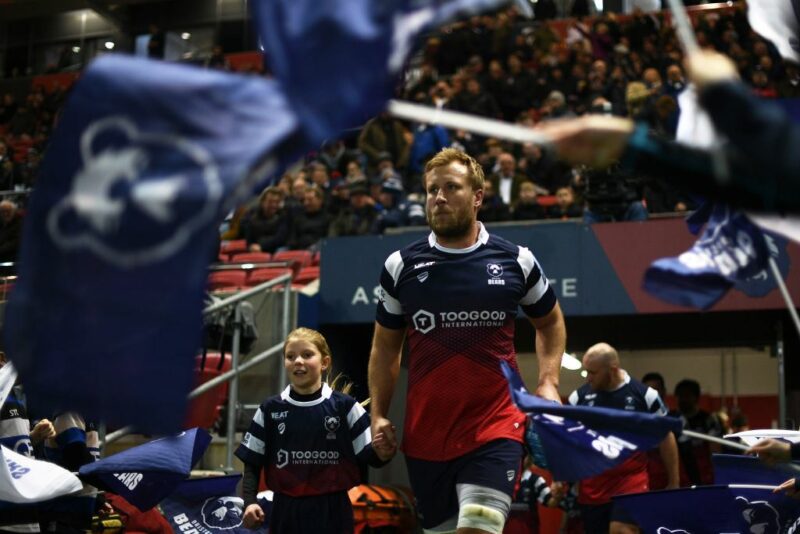 It is said a champion should be able to go out on their own terms but sporting life doesn’t always work like that – just ask Jordan Crane, a serial Premiership winner who found himself marooned by the Covid pandemic and sent into retirement with a few handshakes but no fanfares.

The 34-year-old played his last game for Bristol on March 1 in their 19-13 win over Bath at the Rec. The No.8 had announced he was hanging up his boots at the end of the current, still unfinished, season and had expected to sign off in June as a player.

You would have expected he had done enough for a decent send-off. He helped Leicester to four domestic titles in 2007, 2009, 2010 and 2013 and memorably kicked the winner in their 2009 European Cup semi-final penalty shoot-out against Cardiff Blues.

Then there’s three England caps, against South Africa, Australia and Argentina in 2008 and 2009, and the service he has given Bristol, helping them to promotion and to third in the league.

But the sporting gods are cruel.

Happy to report, though, that Crane took it all on the chin and grabbed a coaching chance to work with the youngsters at the Bears who have been transformed since the arrival of Pat Lam as director of rugby in 2017.

Everyone wants to go out clutching a trophy but even the carrot of a shot at the title when rugby finally resumes could not get Crane back in playing harness.

He said: “I have finished. It was almost ‘do I carry on? Do I go through another pre-season before this last bit? Probably not.’

“I had signed for one more year and I thought get through this and do well and I had a good run-in then all of sudden I just began to break down. My back, my hamstrings, my ankle, my hamstring again, I just couldn’t catch a break and I couldn’t get fit and I started to deteriorate.

“The physios and the strength and conditioning coaches managed to patch me up and got me back out there. I played a couple of A League games and Pat picked me to play the Bath game at the Rec just before lockdown and we won.

“Just to be able to get back for that and have that as my last game was nice. We have Leicester as the last fixture of the season and I always pictured that is the one I wanted to go out on, but if I had to pick another one, beating Bath at the Rec is not a bad one to finish with.

“I spoke to Pat and because they have all the new players coming in and my body was hanging on anyway it was good to just finish and start in the new coaching role.

“I made the decision at the start of the season that I was going to retire and I thought I had nothing else to prove. I won loads of stuff with Leicester and I achieved everything with Bristol that I signed for, getting the club back to where it should be.

“Of course you would love to run out one last time at home but realistically would I have been playing in that big game? Probably not, at the stage I was in my career. Now I am still involved and my career stacks up – I have absolutely no regrets.”

The Leicester juggernaut that Crane was part of were one of the templates for a modern professional club but he can see shades of the old Tigers in the new Bristol. They have got Kyle Sinckler, the England prop from Harlequins, and the brilliant Fijian back Semi Radradra on the books to help their push to glory to add to the likes of Charles Piutau and Nathan Hughes. Heady days down Ashton Gate way and the locals are lapping it up.

“The four Premierships that we won at Leicester were class,” says Crane. “In my first seven years we went to seven Premiership finals in a row. The mentality of being part of that machine that kept churning out finals and semi-finals was great.

“But I look back now and I take immense pride in how, in the last four years, we have managed to get Bristol from where we were, to have captained the team and to have played a part in that. It definitely stacks up with some of the other successes. If we had not got it right when Pat came in it could have been completely different.

“There is the good work that Pat has done since he got here and the players absolutely buying into to those ideas. You can see the way the club is building with the new training ground, Ashton Gate is filling – it is world class. We are only going to get better and better.

“The aspirations at the start of the season were top six but that is the minimum standard. Whatever we go on to achieve is all down to the hard work of everyone involved.

“You can imagine now we have started to get better, we are winning games and stacking Ashton Gate out. Against Bath and in other games we have had 20,000, everyone has got behind it. It is a big family club and I absolutely love it down here.

“I signed under Andy Robinson and got sold the dream of getting Bristol back to the big time. The first season did not really live up to that expectation and I was thinking ‘what the hell is going on here. Pat Lam is coming in and I am tarnished’. Pat came in and the way he went about everything was just so professional – the detail he went into in terms of the game and the investment he had in the players. He gives you clarity on the game and that gives you confidence to go out and play it.

“He brought in a new culture and a breath of fresh air into the club because we were in a dark place at the time. We had got back to the Premiership after nine years, the first year back in we got relegated and you were like ‘here we go again’ but he stopped all that. We got promoted and it just kept rolling from there.”

Anyone who remembers Lam as a warrior of a player would not be surprised by the impact he has had at Bristol. He was a hero of Samoa and Newcastle but a favourite memory is of him leading Northampton to European Cup victory against Munster in 2000 with a busted shoulder. He is a leader with a capital L and Crane is happy to follow even if it means 7am starts at the training ground in his new role, 6pm finishes and another couple of hours on the laptop at home.

Who knows, with what has gone on at Gloucester recently, we could be seeing the development, finally, of a few English coaches and Crane is happy to learn from Lam.

He added: “Pat is big on making sure everyone is up to speed no matter where you are in the squad. Obviously you would want Charles Piutau, Semi Radrada and Kyle Sinckler playing every game but that’s not realistic is it? You have got to balance it right.

“Pat is one of the hardest working men I have ever seen. He lives and breathes the ethos of the club and inspiring the community. He puts everything into the team being successful but you also see him on a Zoom call to the academy kids – I am talking 13 to 16 year-olds and their parents. I don’t think you would see many other directors of rugby going out of their way to make sure everybody feels that they are part of the Bristol Bears.

“There are obviously different traits from different head coaches that you take. Richard Cockerill (at Leicester) was completely different but he was just as successful.

The coronavirus situation and the rugby authorities’ desperation to get the 2019-20 season done before immediately embarking on the next one – spectators or no spectators – will put a strain on squads. So it is not a bad time to have rock stars like Sinckler and Radradra pitching up for training.

Crane adds: “It is almost like a pre-season build up with the new players coming in half way through a season. It is definitely weird but all clubs will find themselves in the same circumstances and a few more are in a lot more turmoil than us. We are pretty settled with what we are doing – the bulk of the squad is what we had here last year with a few X-factor players coming in.

“When you see that schedule it is going to be absolutely hectic. I remember in 2008 if you got to a final you had to play a midweek game and when I was at Leicester we played the Barbarians or Australia or South Africa in midweek and it absolutely wiped you.

“These boys are going to have to go Saturdays with four midweek games – it is next level and it shows you are going to need your squad. There are going to be players that haven’t played that much rugby that are going to get rugby. It will be a good thing for some players but you just hope it doesn’t break others.”

Bristol’s first game back sees them host Saracens on August 15. Saracens might be down, thanks to their relegation following the salary cap scandal, but noises from Allianz Park suggest they are not out. They have European business to attend to.

But Crane is not expecting the English and European champions to give Bristol an easy ride even if there is nothing on the game for the Londoners.

“Quite a few of their squad have been loaned out (including Ben Earl and Max Malins to Bristol) but they have still got a core of great England players.”

He adds: “Ben and Max have both fitted in really well. They are only young lads but you can see that winning mentality and what being part of that club has given them.”

Jordan Crane knows a winner when he sees one. Mainly by looking in the mirror.