Luke Cowan-Dickie interview – Hooked on being the best for England 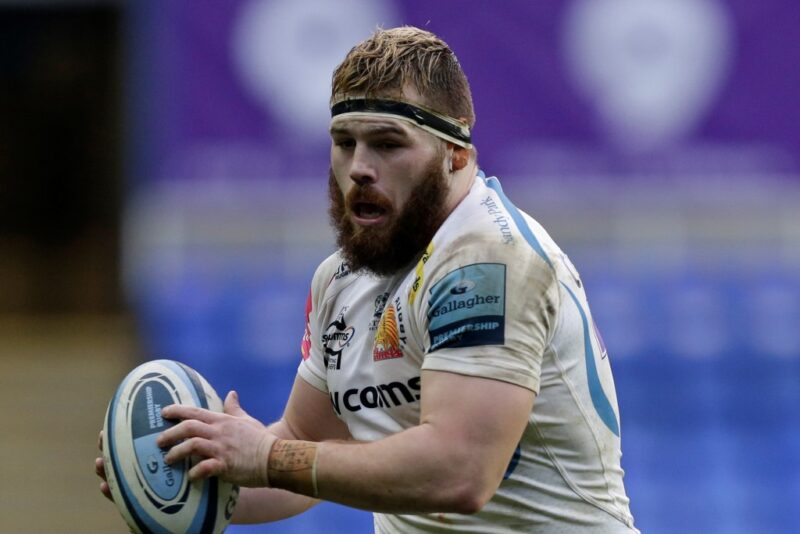 LUKE Cowan-Dickie is piling on the pressure, lockdown or no lockdown.

The Exeter Chiefs hooker has undergone a remarkable six-year transformation which has seen him go from a novice, having switched from loose-head to the middle of the front row in 2014, to one of the best Test hookers in the world.

There is no surer way to attract attention than scoring tries at international level, and Cowan-Dickie has scored six in 24 Tests for England, even though he has made only three starts since his debut against France in 2015.

All of those tries have come within the last year, and are testimony to the traction he has made as he approaches his 27th birthday. The latest of these was scored in England’s victory over Ireland in the Six Nations at Twickenham in February, when, just after the hour, the prop-sized bench hooker’s precision throw at a five metre lineout was caught by Joe Launchbury.

By the time Launchbury had landed Cowan-Dickie had already bound onto the maul, and instantly latched onto the ball. His chest was parallel to the ground, and as he splintered off to the blindside, with Sam Underhill binding on to his 6ft, 17st 9lbs (112kg) frame, his leg drive and low body-position were textbook – and unstoppable.

As the line got nearer and Irish defenders tried to plug the gap, Cowan-Dickie got lower, thwarting any of them from getting enough purchase to stop his momentum, so that when his shoulder hit the turf just before the line he was able to twist over and ground the ball.

The accuracy of his radar meant that he knew what he needed to do, and when and where to do it. It was almost as if he had become so adept at scoring from similar positions that it was in his muscle memory.

Sharp radar clearly runs in the family, because his dad Adam, a Cornish trawler skipper, landed a record £126,000 catch of Dover Sole at Brixham harbour soon after returning from Japan as an England World Cup supporter. He said: “After being in Japan for so long (watching Luke) I ended up spending a small fortune, so I really needed this catch.”

Cowan-Dickie’s netting of a six-try Test haul is double that of his England and Lions rival Jamie George (52 Tests, 26 starts, three tries), and ahead of the massive South African hooker Malcolm Marx, who is considered by many to be the best in the world (33 Tests, 24 starts, five tries).

In percentage terms, his strike rate is easily the highest among the leading Test No.2s, and the only hookers to have scored more touchdowns are the much more experienced New Zealand duo of Dane Coles (69 Tests, 49 starts, 11 tries) and Codie Taylor (50 Tests, 27 starts, 11 tries), and the Springbok dynamo Mbongi Mbonambi (36 Tests, 11 starts, seven tries).

However, it is not just Cowan-Dickie’s try-scoring exploits that have attracted the attention of Phil Keith-Roach, England’s 2003 World Cup scrum guru.

Keith-Roach was responsible for identifying and nurturing England front row legends such as Phil Vickery, Steve Thompson and Andrew Sheridan, and there are very few more astute judges of front row forwards – which is why his comments about Cowan-Dickie’s potential make you sit up and take notice.

“I can see this bloke being rated the best hooker in the world over the next couple of years. He seems to suit the modern game as an explosive carrier. He’s not just up to playing at international level, he’s making a hell of a difference every time he comes on to the field.

“He’s got the right build, which appears to be all bone and muscle, he’s very durable, and he’s got very good hands. He’s very physical in the scrum, is much bigger than most hookers, and his line-out throwing is so consistent now.

“What hasn’t he got? I love the way he carries the ball so strongly around the fringes. It’s great what these grassroots rugby men at Penzance and Newlyn, and then Exeter, have done to help him develop. I didn’t know he’d be this good – but Exeter did.”

Ask Cowan-Dickie about his try-scoring exploits and he puts them down to his overall progress rather than as an attack of white-line fever.

“I’m trying to be in the right place at the right time, and it’s mainly maul tries and those from overthrows. I’m always looking to put the team on the front foot.”

He says that the birth of his first child during the Six Nations has also been life-changing.

“Obviously, lockdown has not been the best, but it’s been good because I got some more time with my family – my son Arlo, who is four months, and my partner, Chloe-Rose.

“Life has changed having a proper family home. Rugby Union is also my life, but I can put things like not being selected in perspective – and because of that sense of balance, I’m enjoying it more.”

Nobody wants to be on the bench as much as Cowan-Dickie has been – so how does he go about making the most of it until he can claim the England starting slot?

“You have to work out what you can add coming off the bench. There’s no point dwelling on your own disappointment and sapping the energy out of the team.”

Cowan-Dickie says he owes a debt of gratitude to the coaches and players at the Chiefs who have helped him to make the transition to hooker – and admits there were times when he had doubts about it working.

“Now I have no regrets – not at all – but a couple of years ago I might have said I regretted it. When things weren’t going well with the throwing and people were on my back a bit, it was quite tough.

“That’s where Rob Hunter, our forwards coach, was influential. He’s very good at relaxing you by making sure you do not worry about the outcome.

“I wasn’t small when I joined Exeter, but I was smaller than most of their loose-heads, and they asked me to give it a go at hooker. It started with Robin Cowling at Chiefs, and then Ian Peel with England U20s, and I also did a lot of throwing work with Steve Borthwick.

“Our loose-head Ben Moon has helped me quite a bit, and I also looked a lot at Jamie George.

“Off the field Jamie’s a great guy, and easy to talk to, but the competition is on until the team is selected.”

So, how did he get over the rough patches, especially when it came to getting back on target after an attack of the yips undermined his line-out throwing.

“A lot of it was in the mind, because in the past if I missed a throw it was the be-all end-all, even though there were loads of different reasons. It could be because of a low jump, or because I’ve thrown it too early.

“I train smarter now. I’m not throwing to static options like poles or targets so much, instead it’s more live practice throwing to jumpers.”

Cowan-Dickie is eager to pick-up where the Chiefs left off before the pandemic, with their hopes high at the top of the Premiership table, and a home European Cup quarter-final to come against Northampton

“First things first, is to pick up on the form we showed so far, and to get a home semi-final in the Premiership.

“We do quite well in knock-out competitions, but Northampton have a lot of form, and are a dangerous side. Knock-out rugby is different, with no home and away, and teams always arrive well prepared, knowing it is all or nothing.”

However, the tight bonds between  the Exeter players will make the Chiefs a formidable obstacle. They  are illustrated in the special mention Cowan-Dickie has for one of his muckers in the formidable Chiefs front-row, his right-hand man, England tight-head Harry Williams.

“Harry is a very odd character. I call him ‘The Dinner Lady’ because his hair is up in a bun, and he never smiles – but he’s got quite a dry sense of humour. He’s a good man, a legend.”

Cowan-Dickie could not have had a better front-row schooling than at Exeter, and having emerged as a potential world class England hooker, others could soon be heaping the “legend” plaudits he reserves for Williams onto him.