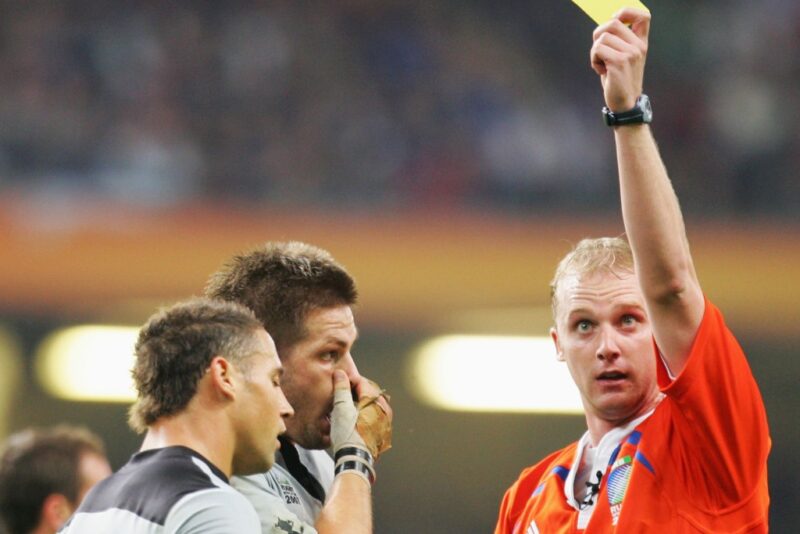 As from this weekend, referees in New Zealand will be empowered to use a new card, a soft red as in soft on law and order.

The red cards they carry into rugby’s first high-level matches since Scotland beat France more than three months ago will be a diluted version of the real thing, a red-lite which will be condemned by many as undermining the ultimate sanction.

With effect from Saturday’s opening tie in Super Rugby’s Aotearoa, the Highlanders against the Chiefs in Dunedin, the damaging effect of a red card will be reduced to a bare minimum. Teams hit by a sending-off will be allowed back to full strength 20 minutes later.

They cannot reinstate the offender but are free to replace him. Those who have lent enthusiastic support to the initiative do not appear to be concerned about the small matter of the punishment fitting the crime.

The change will do nothing to ease suspicions that yet again the law is being tweaked for commercial reasons, to boost viewing figures which have been shrinking from one end of New Zealand to the other almost as quickly as support for a second term of Trump.

“There are no winners when a player is red-carded,’’ says Chris Lendrum, head of professional New Zealand rugby. “Paying rugby fans, players and coaches want to see a fair contest. Replacing a player after 20 minutes strikes the right balance.’’

The Kiwi tinkermen conveniently ignore the fact that there is a winner for every justifiable red card. It’s called the spirit of the game, a fundamental of the sport’s catechism in need of constant protection given its battering from the win-at-all-cost brigands.

The law requiring banishment for violent and/or dangerous conduct does not come with get-out clauses, as if, ludicrously, it ought not to apply in the event of the broadcaster or neutral spectators being denied XV against XV. Everyone knows the score.

Sebastien Vahaamahina knew it when he elbowed Aaron Wainwright in the face during the France-Wales World Cup tie in Oita at a time when his team were sailing serenely into the semi-finals. Despite paying £300 for the privilege of being there, I did not feel short-changed because one man cost his team dear.

Wales, galvanised by their luck with half-an-hour remaining, ensured that the punishment fitted the crime. Under the New Zealand rule, France would have been back up to full strength for the last ten minutes. Imagine the outcry had they got away with it under such circumstances.

Historians can draw a parallel between New Zealand’s softening of the red and what happened at Twickenham almost 100 years ago when Albert Freethy gave All Blacks’ lock Cyril Brownlie his marching orders. The Welsh referee did so after issuing not one, not two but three general warnings over recurring violence, so bad that England’s new prop, Ronnie Hillard from Durham, ended his career on the same day: “If that is international rugby, I want nothing of it.’’

The Times described the dismissal as ‘an unprecedented indignity’. Freethy sent Brownlie off for ‘deliberately kicking the leg of an England forward lying face down on the ground’.

The All Blacks’ manager, Mr SS Deans, considered it ‘a grave injustice’. Maurice Brownlie, New Zealand’s captain during that invincible 1924-5 tour, acclaimed Freethy as an ‘outstanding’ referee and was quoted as saying some while after the event: “He was quite right about my brother Cyril.”

More than 40 years would elapse before another All Black did the walk of shame, Colin Meads at Murrayfield. The referee, Kevin Kelleher of Ireland, got it in the neck for daring to send off a legendary figure, as if that status somehow gave ‘Pine Tree’ immunity.

It may be purely coincidental but New Zealand’s campaign for softer reds goes back a fair way, if not quite to Meads in 1967. “I remember them wanting sent-off players to be replaced back in the Nineties,’’ says Ed Morrison, the Bristolian who refereed the 1995 World Cup final and later managed the RFU’s elite referees.

“Their rationale seems to be: ‘Oh, it ruins the game. Crowds come to see 15 against 15’. We all want to see that but we all have to abide by the laws of the game and the spirit of the game.

“Thirty years ago the game was particularly violent. They’ve done a fantastic job of cleaning it up but if you relax the sanctions there’s a danger some of that good work will be undone.

“As a referee, I did my best to keep people on the field rather than get rid of them because the sanction was massive. I don’t see the need for a change and when I read about it, the hairs on the back of my neck went up. All the time we seem to be trying to make the game ‘sexy’.’’

Another example of the game, albeit a small part, pandering to commercial interests. No team guilty of a red card offence should benefit in any way.