Posted on 19th March 2020 by admin in Features, Young Gun 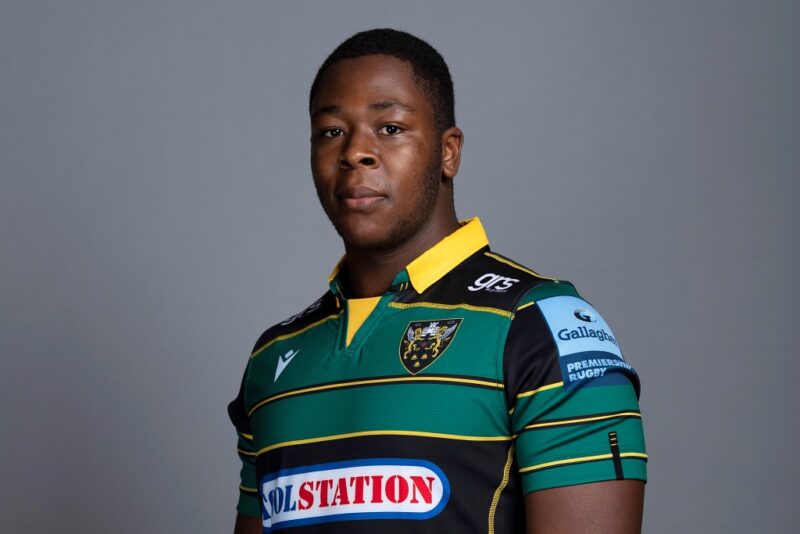 For any aspiring prop, being able to lean on some gnarled experience is never a bad thing, which makes Northampton tyro Manny Iyogun one of the luckiest men in the world.

Not only did he already have one World Cup-winning prop to seek advice from in New Zealander Ben Franks, his club went out last summer and signed another – Franks’ brother, Owen.

Iyogun, currently on England U20s duty for the Six Nations, said: “It’s been an absolute bonus. There’s so much untapped knowledge to speak to them about. Ben’s been class in terms of one-to-one sessions and I’ll watch him scrummaging and ask so many questions.

“Why do you do this? What do you get in that position for? I’m at him all the time. But he’s been brilliant and to have Owen join us as well has been amazing. I’m mainly a loosehead but I’ve played a bit at tighthead as well, so it’s been good to see how they juxtapose.”

Iyogun never set out to be a prop. In fact, the Madrid-born, Basildon-bred youngster had not even played rugby before the age of 14 when he started at Woodlands School.

He explained: “I played football until I was 14 but Woodlands gave me a shot at rugby and I wasn’t too bad at it. I got to play at Basildon RFC, played a few games there and then went to Southend RFC, who had a good age group set-up, from where Saints then picked me up.

“I started in rugby as a centre and, as I got bigger, was moved to No.8, but at the beginning of this season, before signing my first contract, I spoke to my academy manager, Mark Hopley, and he said they saw me going further as a front row and would I mind giving it a shot?

“I was pretty open-minded so I played a few games and absolutely hated it, but I stuck with it, signed the contract and have loved it ever since. I’d dreamed of being a Billy Vunipola or Louis Picamoles but the move’s paid off. If it hadn’t, I wouldn’t be with England U20s now.”

Iyogun added: “I’ve got to credit (Saints DoR) Chris Boyd and our scrum coach, Matt Ferguson, and how much they’ve given me. They’ve pretty much thrown me in and let me have a lot of experience training with the first team, doing live scrums and trusting me to develop quickly. Matt’s a class bloke who’s taken a lot of interest in the academy lads.”

Having started the season on loan at Loughborough Students, Iyogun has progressed rapidly to earn his England U20s stripes. He said: “National Two was great and Loughborough play a free-flowing style that suits me. Things went from there and to step out for England 20s at Franklin’s Gardens against Ireland recently was quite unreal.

“The result didn’t go our way but it doesn’t take anything away from the fact you’re representing your country and doing what you love.”