Posted on 28th February 2020 by admin in Features, Young Gun 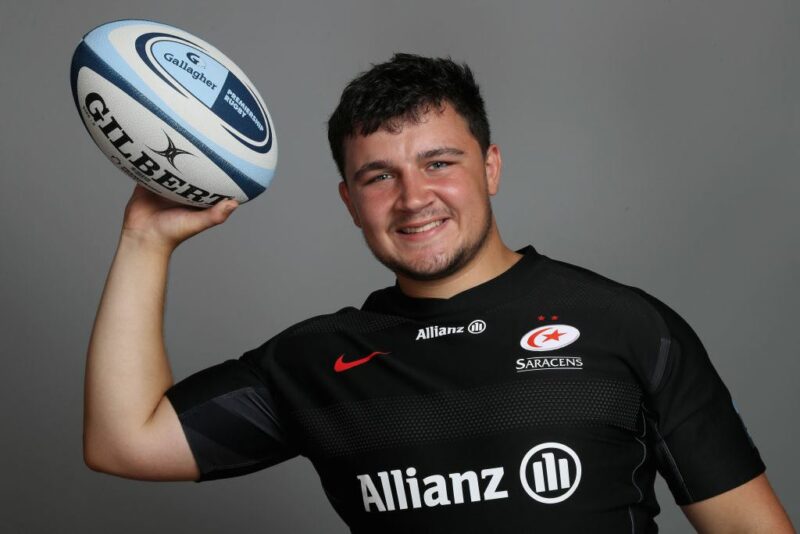 Saracens are up to their knees in strife but a positive by-product of their impending demotion to the Championship is that younger players will see more game time.

One of those academy protégé’s vying for recognition is Sam Crean, a 19-year-old loosehead who converted last season from playing at hooker. Crean has already made an impact in their first team and is currently part of the England U20s Six Nations squad.

Crean has benefitted hugely from Saracens’ move towards blooding more academy players after featuring in all five of their Premiership Cup matches and making an unexpected Champions Cup debut on one of the most daunting stages in Europe.

“I was very lucky with that one,” Crean recalls. “It was Racing 92 away in November, at their new stadium, and that was a very good experience. It’s an amazing place, completely different to anywhere I’d seen in rugby before, and it was a little daunting.

“I don’t really get too nervous before games and I’m generally pretty chilled, but when they told me to warm-up

before going on, I’ll admit to being pretty tense. But what a great experience it was and I’ve really enjoyed the Premiership Cup games as well.”

Hailing from Rochester, Crean played his mini and junior rugby for Medway RFC until his big break came when he earned a scholarship at Harrow School.

He explained: “My dad took me to Medway when I was four or five and it’s always been rugby for me. I played there through to the U16s but had to leave then because I was lucky to get on the radar of Saracens and then get the opportunity at Harrow.

“I played county rugby for Kent at U15s and 16s level but in my first year I was invited to an academy festival at Harrow and Rory Teague, who’s now at Gloucester but coached Saracens’ academy at the time, suggested I should apply for a scholarship.

“They have great links with Saracens and a fair few of us have come through Harrow, including good friends like Manu Vunipola, Andy Christie, Tobias Munday, Sean Reffell, Elliott Obatoyinbo and Reuben Bird-Tulloch, who’s now gone to Northampton.”

As for his conversion to loosehead, where he is now lining up just behind Mako Vunipola and Richard Barrington in the Sarries pecking order, Crean says: “They had a bit of a prop drought in the academy so I was asked to bench at loosehead. But I ended up starting instead and when they said there was an opportunity to move across, I jumped at it.

“It’s been a very good switch for me and Mako’s obviously a great guy to learn off. He’s not your normal prop, the way he uses the ball and carries is outstanding and he’s more of a playmaker. If I can be anything like him, that would be great.

“England U20s is my focus now but hopefully I can get plenty of game time for Sarries next season and the Championship’s a great place to learn.”