Posted on 24th January 2020 by admin in Featured, Features 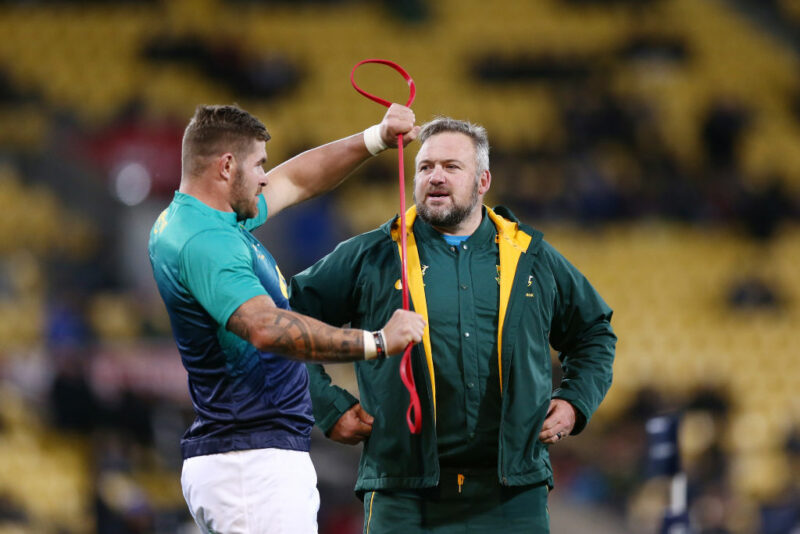 MATT Proudfoot’s arrival as the new England forwards coach seems like a case of ‘if you can’t beat them, get them to join you’.

Since Proudfoot’s South African scrum pulverised England’s pack to give the Springboks the winning hand in the World Cup final in Japan in early November, the 47-year-old’s stock has gone through the roof.

The result was a Twickenham head-hunt for the man who helped to scupper English dreams of a second world title, resulting in the RFU confirming Proudfoot in his role as Red Rose forwards supremo a fortnight before the start of the Six Nations.

To get a register of what England have bought into we need to travel back to the triumphant South African changing room in the Yokohama International Stadium as Siya Kolisi and his squad savoured becoming champions of the world for the third time.

Proudfoot was sat next to Pieter-Steph du Toit, and he told the big Springbok flanker that after another outstanding match he hoped he would win the World Rugby Player of the Year award.

“That would be really special,” Du Toit said. He then asked Proudfoot what areas of his game he might improve. It was a moment that reflected Du Toit’s insatiable desire to improve, despite just scaling the game’s highest peak.

Proudfoot’s conversation with Du Toit led him to this observation: “There’s just a pride in who he is as a man. If you meet him, you understand his incredible values and what sparks this. He’s very earthy, with tremendous morals. He’s from farming stock; he refuses to put in a bad performance because, to him, that’s a compromise on his values.”

The coach reflected that the recent birth of Du Toit’s son had given him an even greater sense of purpose.

“He’s Pieter-Steph number seven – his son is number eight – so that’s a strong family line. He’s a no-nonsense guy who doesn’t seek validation. He just wants to know what he’s got to do.”

Proudfoot added that Du Toit, who had also played at lock for the Stormers and South Africa, had found his true home at No.7 – which in Springbok line-ups is on the right side of the scrum behind the tight-head, where they traditionally put their biggest flanker.

Proudfoot said: “He’s an out and out athlete, but playing lock probably dulled his athleticism. He’s now freed up from that world – although four, five and seven operate similarly in general play, four and five are asked different questions in set phases.”

He continued: “I always knew he was a seven: he’s got momentum because he gets momentum. As a seven, his natural physicality comes to the fore. I always said he was up there defensively, but he can get better as an attacking force. I told him and he said, ‘coach, I want to work on it’.”

The Proudfoot analysis of Du Toit, who went on to secure the World Player trophy, went further, as he commented: “He’s very intelligent as a leader. He doesn’t say much, but the group listens. He just puts it out there. Being a Springbok matters to him.

“Make no mistake, he’s the leader of the pack. He instils an amazing standard. He’s so close to Eben (Etzebeth), Siya (Kolisi) and Frans (Malherbe) – there’s a quiet respect between each of them. He’s got a fun streak too. He’ll relax among a small group of forwards. He has a big laugh and is just a quality human being.”

This cameo of Proudfoot as a coach who places a high premium on getting to know players as people rather than simply cogs in a rugby wheel is supported by Schalk Brits, the exceptional former Saracens and South Africa hooker.

Brits, who was brought into the Springbok World Cup squad for his veteran savvy 18 months before the tournament by head coach Rassie Erasmus, says Proudfoot seeks to establish a rapport with his players.

“It was a good experience working with Matt in the Springboks squad, and he had a big impact with us. He’s quite passionate about his players, and he invests time, energy, and emotion into each individual in the pack.”

Brits also provides an insight into the South African mindset which put the scrum at the heart of their tactical plan in the knock-out stage.

This resulted in Erasmus, right, deciding on a 6 forwards/2 backs split on the replacements bench. This loading-up on front five strength incorporated the gamble of getting the experienced utility player, Frans Steyn, to cover every backline position except scrum-half.

Brits says: “We put such a strong emphasis on the set-piece, because to win any competition, especially a World Cup, we knew the set piece was crucial to success.

“The 6-2 split by Rassie was a quite unique initiative, which paid off in the knockout stages – but in many ways it was Frans (Steyn), who gave us the possibility to do that.”

Brits adds: “We were lucky it played into our hands even more when Kyle Sinckler had to go off so early, because for one tight-head (Dan Cole) to scrum against two fresh loose-heads (Tendai Mtawarira and Steven Kitshoff) was very difficult – and it was even more of an advantage because we also had two fresh locks on the bench.”

However, Brits confirms that, irrespective of Sinckler’s injury, South Africa were going to go full-tilt at the scrum. “We would have used it anyway. Whatever happened we were going to try to make it work, because tactically we knew our plan was sound.”

However, the idea that Proudfoot, a South African-born prop who played for the Blue Bulls, Edinburgh, and Glasgow, before winning four caps for Scotland (1998-2003), and who has gone on to coach at Western Province, the Stormers and Kobelco Steelers (Japan) before getting the Springbok forwards role under Allister Coetzee in 2016, is a hard-taskmaster is downplayed by Brits.

“If I compare him to Rassie Erasmus and Eddie Jones, he’s not. He is reasonable, and did not ask us to do anything silly – he wants the players and team to play to its potential. I thought Mark McCall at Saracens was always pretty solid in the same way.”

Brits adds that Proudfoot “is a good guy”, but the hooker, who won two European Cup titles and four Premiership titles in nine years at Saracens before being part of the 2019 Springbok world champion team, says it is important he gets the right support.

Brits suggests there could be a danger of overload if Proudfoot is expected to take on responsibility for the scrum and line-out, where previously Jones had Neil Hatley as scrum coach and Steve Borthwick as forwards/line-out coach.

“It is extremely hard to run a scrum and a line-out as an attacking and defensive platform at Test level, because there is limited time, and it is why the job is usually split in two. So, he will have his hands full.”

“Luckily, Matt will be working with a very experienced pack, and at the scrum it will mainly be about his input in terms of technical expertise.

“I believe England have a good front row, but it’s not just the forwards, or the team, it’s about how Eddie and Mitch (John Mitchell) support Matt, and how they gel as a coaching group. A lot depends on the boss.”

Brits says that Proudfoot is part of a new, more collaborative coaching culture: “My opinion is that the dark days of coaches telling players what to do has changed, and now it is more of a joint-venture where they collaborate and agree the way ahead. That’s how it has been at any good team I have played for.”

Ask how much of a loss Proudfoot is to South African rugby and Brits answers: “Of course it is a loss. But Matt has got a view of constant improvement and learning, and I think he wants to be his own man, and eventually be a head coach.

He adds: “I hope he is successful – but not too successful, because, although England are my second team and have a special place in my heart, I don’t want him to beat South Africa.”

After the World Cup final defeat Jones remarked that England would be kicking stones down the road for four years.

Proudfoot is here not so much to partake in stone-kicking, as giving a bruised England pack a kick-start.