Posted on 15th February 2019 by admin in Features, Nick Cain 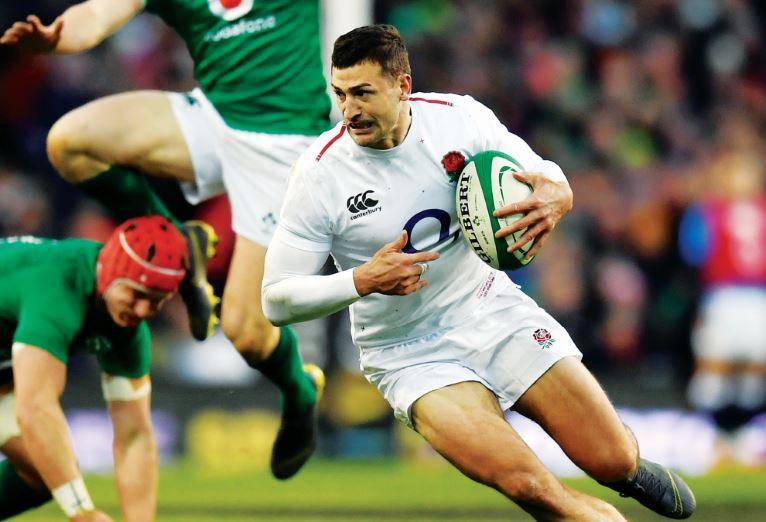 Jonny May showed last weekend in Dublin that he has a head for heights and he has every intention of moving onwards and upwards against France in Le Clash at Twickenham this afternoon.

Not only did the 28-year-old Leicester winger score the first of Englands four tries against Ireland – and set up another for Henry Slade with a perfectly struck chip while he was in full stride – he was also flawless under the high ball barrage.

May spiked the Irish bombardment by catching everything, and regularly returning it with interest thanks to a sinuous strength in contact which belies his lean frame. It was a display which showed character as well as the undoubted class that has resulted in a strike rate of one try virtually every two Tests, with 19 touchdowns in 41 international appearances.

That record as a lethal finisher, as well as a reputation as the fastest player in English rugby – not to mention his attributes as an aerial ace – demands that France give the English flyer their undivided attention in the second round of this Six Nations campaign.

May’s track-record spells out that anything less will be costly, with Eddie Jones’ side eager to back up their command performance in the opening round. However, he is respectful of the French despite their profligate waste of a 16-0 lead against Wales in Paris, especially where their re-cast back three of Damian Penaud, Gael Fickou and Yoann Huget is concerned.

He says: “France are probably a bit more unpredictable than Ireland, and that means you’ve got to be ready for anything. You’ve just got to prepare as well as you can, and be ‘on it’. You have to be in the moment, be constantly aware of what’s going on around you, especially from turn-overs or an offload – because that’s where they come alive.

That’s when you’ve got to be aware of where everyone is, aware of backfield space, where their winger is, and where their threats come from.”

He adds: “They’ve bought (Mathieu) Bastareaud back, and have a big pack so anyone can see what physical opponents they are going to be. The way the French are they can play some brilliant rugby out of nowhere, they can create magic, so, you’ve really got to be alert.”

There is also no complacency when May appraises his opposite number: “Penaud’s a strong guy, a quality winger. But I play against quality guys every week. I’ll understand what his game is and respect that. He runs upright and has a strong fend. He’s fast, physical, a good, dangerous player, so I’ll have to be ready.”

May says his increased experience at Test level has made him a more complete player, but he also points to acquiring a broad spectrum of skills through a path to becoming an elite athlete that was as haphazard as it was fast-track.

He combined playing mini rugby at Royal Wootton Bassett RFC from the age of five with trying his hand at a wide range of sports, including athletics. His account of pole-vaulting at secondary school, for example, has more than a hint of the modern-day Corinthian about it.

“I had a very talented year at Ridgeway, a very standard school in the middle of Swindon, and we won the national athletics championship at U13s and U15s. Pole-vault is one of those events where you can score quite a lot of points quite quickly for an alright jump, and me and my friend got quite good at it, and we’d go to Bath University twice a week.

“I ended up competing in the English Schools Championship, and I think I came in the top ten. I was doing quite a lot of light athletics, like speed training, and I’d go to the track a couple of times a week from a young age.

“I really did everything at school. We had a brilliant PE teacher. For example, we’d do gym and dance displays – jump over things, and do somersaults – and I quite liked doing that. We had a trampoline at home, so I was happy to just jump into things, and he was happy to say have a go at it.”

He adds: “Our school didn’t have a big pole-vault mat, or a cage or anything because they were probably quite expensive, so we just used to plant the pole in a box in the sandpit and jump into it. One day I went pretty high unexpectedly, and landed on the sand – and that’s when we said we can’t do it here any more.

“I remember competing against schools like Millfield – and we beat them, which is a good achievement. I did pole-vaulting until the end of secondary school, and my best jump was about 3.5 metres, which is alright, but after that I focused entirely on rugby. Rugby was always my favourite.”

May says that the quality of the team performance against the Irish reinforced that feeling – but that he has no intention of dwelling on it.

“That was the best one I’ve been involved in. It wasn’t just me, I think everyone was ‘on it’ that day, and everyone bought the best out of each other. But it seems like a long time ago now – you’ve got to enjoy that, but the process continues.

“We get back to work and ask where can we get better, because there’s a big game this weekend. That’s how it goes.”
Where May’s high ball gains are concerned he salutes the input of Neil Craig, England’s high performance manager, who is a former Aussie Rules player and coach, as well as Jones and attack coach Scott Wisemantel.

May adds that training is targeted at improving skills. “Eddie has lots of different balls. Sometimes he uses footballs in training, sometimes these weird half balls.

“We’ve got these balls with no grip on them which we use for handling in sessions, and in Portugal we were practicing with this bald ball covered in soap which is hard to catch…”

If France kick too much ball to Jonny May’s wing they are in danger of discovering that he is every bit as hard to hold.