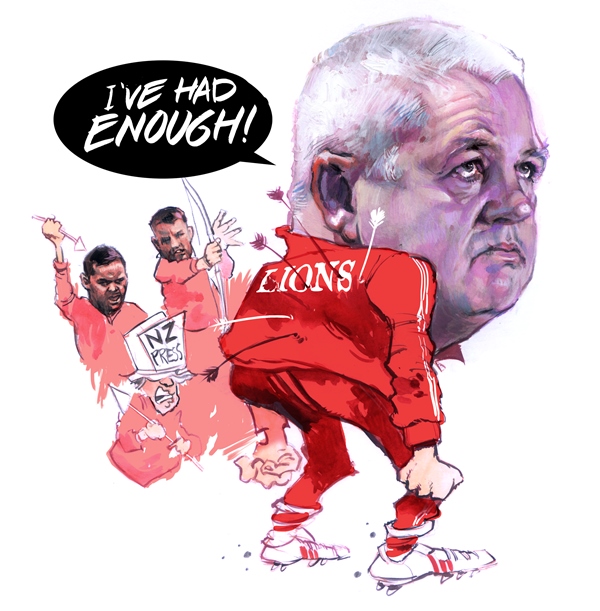 SINCE Warren Gatland decided to retire himself as Lions coach earlier this week his motives have been questioned. It’s been suggested that he is too thin-skinned for top end sport, that it’s timely promotion for his new book, and – all the way from New Zealand – that he is wrong to position himself as a victim.

Those judgements are a distortion of the issues surrounding Gatland’s role in the 2017 Lions tour, including the criticism by one of the tour’s stand-out players, Sean O’Brien, that they would have won the series 3-0 with better coaching.

It is also begs the question why one of the most successful coaches in the game, who took the touring side to victory in Australia in 2013, and then a drawn series against a New Zealand side defending their record as double world champions, should decide against coaching the Lions again.

Gatland says he hated the tour, the Press, the negativity in New Zealand.

He added: “You watch how hard the coaches and the backroom staff worked and then to have someone (like O’Brien) come out and make a comment like that, it really did hurt. I wouldn’t subject myself to that again.”

Gatland is a straight talker, and it is insulting to suggest he would take a decision of such magnitude simply to sell a book, as has been suggested by some social media trolls.

No-one can blame Gatland for his decision to get out of the Lions kitchen, because the heat he endured in New Zealand was scorching. There were daily attempts on the part of the local media to torch his coaching credentials, and undermine the tour squad. Then, to add insult, there was the O’Brien furore.

Having predicted before the tour that Gatland would be Public Enemy No.1 in New Zealand my only surprise was that he appeared to underestimate the Kiwi media’s influence as a propaganda weapon.

As a result, the orchestrated campaign to burn Gatland was not deflected enough by firewalls which could have been put in place by a better Lions communications strategy. Other coaches and players should have shared more of the media duties.

Gatland’s reaction to O’Brien suggests he sees the comments as a breach of trust within the touring squad. Yet Brian O’Driscoll’s axing by Gatland from the final Test line-up in Australia in 2013 was also seen as a breach of trust by a huge number of Irish commentators and fans, and probably Leinster and Ireland team-mates, of which O’Brien was one.

I did not agree with the pro- O’Driscoll brigade then, and nothing has changed my mind since. Gatland’s overriding mission was to win a series against the Wallabies and his selection policy was vindicated by a resounding victory.

O’Brien’s view that the Lions should have won the New Zealand series 3-0 is wishful thinking, but I agree with his right to give his opinion. The fact that the Irish flanker did not air his grievances with the coaching team at the end of a fiendishly difficult six-week tour, or during it, does not sit so well. Perhaps he was wary of creating a split within the ranks, especially as his criticism of attack coach Rob Howley was so pointed.

Since the tour O’Brien has clearly decided that his loyalty is to the Lions rather than to Gatland, who has returned to his job as Wales coach, and he says he spoke out because he believes the Lions coaching structure should be more rigourous in 2021 in South Africa, and beyond.

The high esteem in which Ireland’s Kiwi coach Joe Schmidt is held by his squad is well documented, and that sort of partiality should not be ruled out when players like O’Brien offer opinions on coaching. The same applies to Eddie Jones among the England squad – like Billy Vunipola, who said the Lions would have won 3-0 if Jones had been in charge.

Gatland is not without supporters, especially among the Welsh Lions. Sam Warburton, the 2017 Lions captain, had this response to the O’Brien criticism. “When you’ve got such a large group of players it’s difficult to please everybody but 99.9 per cent of people thought the tour was a success.”

The Lions player of the series, Jonathan Davies, said Gatland had deliberately put himself in the New Zealand media’s firing line to relieve the pressure on his squad.

Davies added: “He took a lot of the stick. No players were singled out in the Press, he took it all.”

Gatland was paid handsomely to be head coach of the Lions. However, the intensity of the tour and the unrelenting scrutiny he found himself under in the Kiwi media, followed by post-tour criticism from one of the Lions leading players – have come at a price above financial rewards.

Despite leading the most successful Lions tour to New Zealand since 1971, the pressure it put on Gatland has brought him to the point of no return.

That is not a good thing for the Lions, with the danger that coaching them could be seen more as a poisoned chalice than one of the greatest honours in the game. The Lions board will have to react sharply to repair the damage.