Munster out of Champions Cup as Leinster and Ulster progress

Posted on 21st January 2020 by admin in Champions Cup 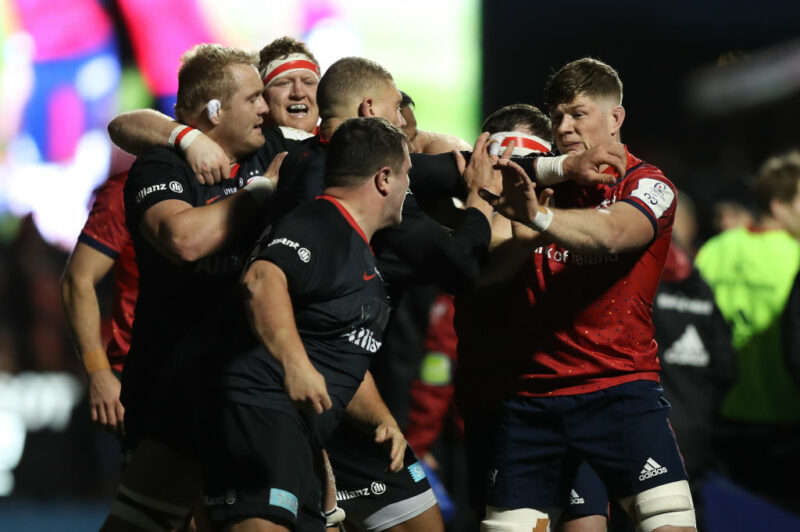 In what was a very rare fall from grace for the Munster squad, the door for this year’s Champions Cup closed on Sunday 19th January as the team failed to qualify for the knock-out stages of the European Cup.

Despite comprehensively beating Ospreys at home in Thomond Park, a fortress for the Reds, their fate was already sealed when other weekend results didn’t go their way.

Prior the last round of action in the group stages, Munster was sitting in 11th place, with only eight guaranteed spots available for the quarter-finals. Four pool winners had already been confirmed and Munster’s chances of qualification were hanging on by a thread.

Looking to secure one of three best runners-up places, Munster were on 11 points in Pool 4. A bonus point win against Ospreys would take their total to 16 points. It was always going to be a race to the finish with Saracens, Gloucester, Northampton and Glasgow Warriors all above them and the permutations for qualification were looking more and more unlikely.

Munster needed at least three of those four teams to lose their last pool game to take one of the two final best runners-up places behind either Ulster or Clermont.

But it was not to be. Northampton beat Lyon, Glasgow Warriors beat Sale Sharks, Saracens beat Racing 92 leaving only Gloucester who lost to Toulouse. And so ended the dream of a 19th Quarter Final in the European Rugby Champions Cup for Munster.

Like all teams who experience a low period, the process of re-building will now commence. Fans can take heart from some excellent performances at the weekend, none more so than from the young fly-half, Craig Casey, who scored within seconds of coming on. Calvin Nash, Ben Healy and Jack O’Sullivan also made their European debuts so while their Champions Cup campaign may have ended in disappointment this season, the future is still bright for Munster Rugby.

Despite Munster’s lack of Champions Cup success this season, the Irish still have a lot to cheer about. Both Leinster and Ulster qualified with Leinster topping Pool 1 with six wins from six. With four European Cup titles already in the bag (2009, 2011, 2012, 2018) can Leinster make it as five-time Champions?

The top seeds in the competition will now march on and face Saracens in a home Quarter-final at the Aviva Stadium in April – a repeat of last year’s final in Newcastle. That was the first time, in four European clashes, that Saracens managed to get the better of the Irish side so can they do it again in 2020?

Leinster are undoubtedly one of the best sides currently playing European Rugby. Their dominance in the game is undisputed and white-washing Pool 1 will give them plenty of encouragement as they go up against Saracens.

Saracens for their part are a team in turmoil. The league title holders and reigning European champions have now been relegated from Premiership rugby for breaching the salary cap and as of June 2020 they will be playing second tier rugby. The £5.36million fine for breaches in three consecutive seasonal campaigns won’t help matters either.

Despite that, they may want to end this season on a high and will go to the Aviva looking for redemption and a last ditch attempt at some silverware. That said, Leinster are the better side this year and should progress to the Semi-finals where they will meet the winner of the ASM Clermont Auvergne v Racing 92 tie in Dublin.

Ulster have the daunting prospect of heading to the Stade Ernest-Wallon where they will face-off against four time European Champions, Toulouse.

Ulster qualified in second place from Pool 3 behind ASM Clermont Auvergne and finished their campaign on 21 points, losing only one game and that was to the Pool winners, Clermont.

Despite a very worthy campaign, the odds are firmly in Toulouse’s favour to not only win the game but to win the Champions Cup outright. For now though, there is a still a chance that the Ulster men can put together a game strategy to neutralise the machine that is Toulouse. The winners of that match will meet the winners of the Exeter Chiefs v Northampton Saints game in the semi-finals.