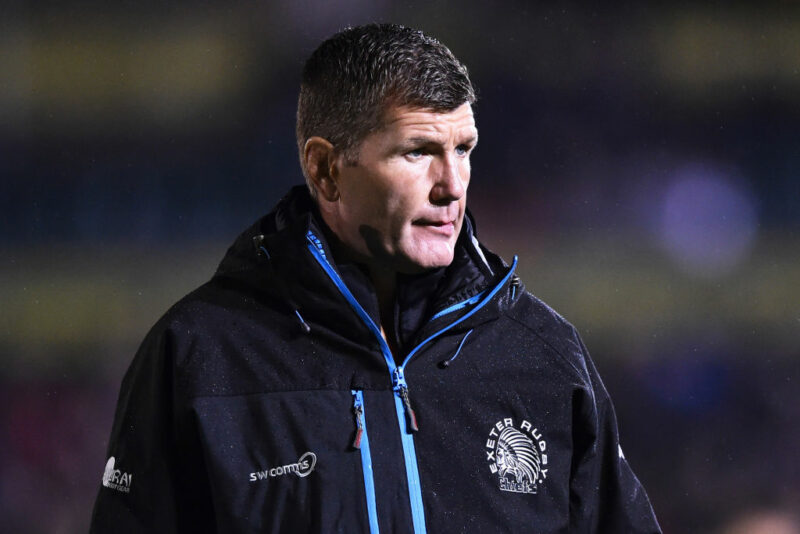 Director of Rugby Baxter, together with head coach Ali Hepher, forwards coach Rob Hunter and skills coach Ricky Pellow, have all committed to stay with the Devon club until 2023.

Since coming together, the quartet have helped mastermind the rise of the Chiefs, guiding them to Premiership Rugby glory in 2017, as well as three other appearances in the end of season showpiece at Twickenham.

“Personally, I’m absolutely delighted to have agreed a new three-year contract extension,” said Baxter. “However, I’m even more pleased that the other coaches have also agreed similar extensions. I think it’s a real indication of how happy we all are working alongside one another each day.

“Together, we understand the ambitions of the club moving forward – and of how exciting this next period is going to be for the rugby club. I think as a group we all feel that everything we want to achieve can be achieved here over these next three years, so it’s exciting times for all of us and I’m looking forward to us building on the fantastic foundations we have laid as a collective group.”

Former player and club captain Baxter took charge of the Chiefs ahead of the 2009/10 season – and immediately brought success to the club, working alongside both Hepher and Pellow, steering the club to success in the inaugural RFU Championship Play-Off Final.

Since their arrival in the Premiership, the trio have been heavily involved in helping the Exeter to forge themselves as genuine force within the English game. Hunter, meanwhile, joined the club in 2013 following a highly successful stint as England Under-20s head coach, working with the likes of Jack Nowell, Henry Slade, Sam Hill and Luke Cowan-Dickie.

The decision by the quartet to extend their stays has been welcomed by club chairman and chief executive, Tony Rowe OBE, who said: “This really is fantastic news for the club. In Rob, Ali, Rob and Ricky we have the best English coaches in the business. As a coaching team, not only do they continue to drive our great club forward on all fronts, but they are at forefront of making the Chiefs who we are.

“The success they have brought to the club during their time in charge is there for all to see and I’ve no doubt that in these coming years they will continue to drive us onwards and upwards.”