Tigers can claw back into the Premiership title race, says Jonah Holmes 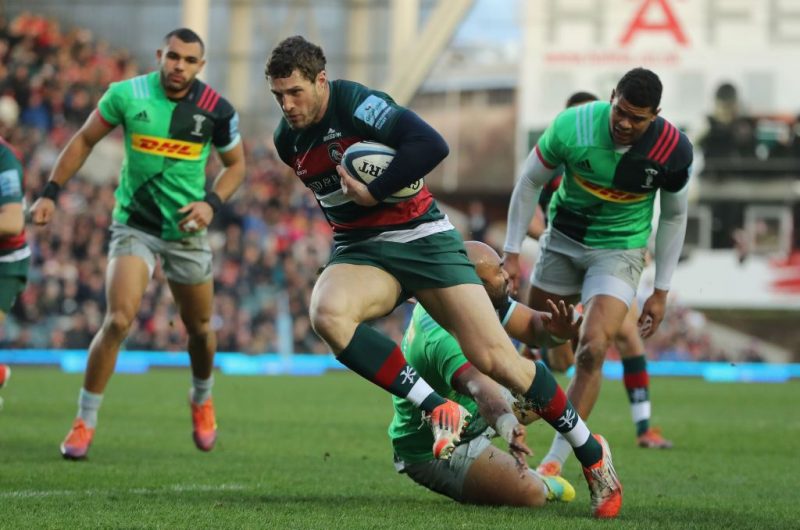 FORGET the fear of relegation, Jonah Holmes predicts Leicester Tigers can still make a charge for the title.

Holmes raced over for a brace of tries in the win over Harlequins last week which ended a miserable eight-game losing streak.

Now, the Stockport-born back, who made his Wales debut against Tonga in November, insists it is time to push on and claw their way into the Premiership title race.

Holmes told TRP: “I think we can do it. It’s going to be difficult because of the number of other clubs who also believe they can get into the play-offs and competition is fierce, but it is certainly our target.

“We had to remain positive and believe that eventually it would be ok. If you get too down on things or worry then it could become a downward spiral.

“The table before the game with Quins was not nice to see. We were three points from the bottom and needed to start dragging ourselves in the right direction.

“We spoke in the dressing room after the game that this result will mean nothing unless we back it up with some more good performances – and wins. We need to step up again on what we did in that game, but we will go to Bath with confidence and believing we can get the job done there.

“When you look at the squad we have there’s no way we should have been struggling the way we have. It was just about stopping the rot, turning things round and then getting some consistency in performance and form on the field.”

Last weekend’s defeat at Bath dropped the Tigers down to ninth in the Premiership but, but they remain in shooting distance of the top four with four points seprating them from fourth-place Harlequins

Holmes adds: “The points difference between eight or nine of the clubs is so small that every match is so important. We’ve shown that just one win can move you from the depths to near the top. So two or three wins would make a massive change to how the season is looking.

“Any team in this league can beat the other on any given day. It’s the most competitive Premiership in terms of the number of clubs challenging for the top four in years.”