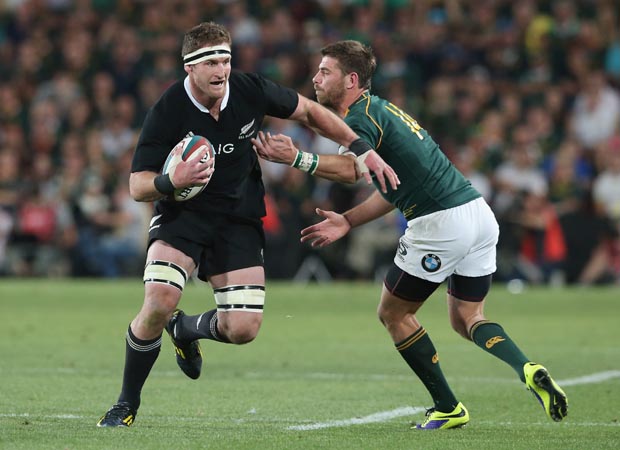 When Adriaan Strauss stepped onto the broadcasting plinth at King’s Park in Durban after South Africa had suffered a humiliating record 57-15 home loss to New Zealand, the Springbok captain’s downbeat demeanour reflected the current state of South African rugby.
Strauss had announced before the end of the Rugby Championship that he was leaving the sinking ship when the campaign was over. The official South African rugby wording that Strauss was retiring from international rugby was diplomatic, and failed to mention that he would most likely be joining the exodus of South Africans playing abroad.
This is currently estimated at 350, based mainly in Europe and Japan, and Strauss and his agent are no doubt currently sifting the offers from Top 14 and Premiership clubs.
It goes without saying that if any country lost that number of elite players they would be in danger of becoming an overnight basket-case. However, even though it speaks
volumes for the depth of South Africa’s resources that they are still competitive with virtually every nation bar New Zealand, there is also no doubt that the trend is inexorably downwards.
As I wrote in this column just after the 2015 World Cup, the reality is that where South Africa were a rugby
colossus on almost level-pegging with New Zealand, they are now just one of the chasing pack. On their forthcoming autumn tour neither England nor Wales will see their arrival as anything other than a chance to add to their demise. Even Italy will fancy their chances of springing an upset in Florence.
The reasons for South Africa’s decline as a rugby power are part economic, part political, and part administrative bungling by the SA Rugby Union.
With the Rand at anything between 17 and 22 to the Pound over the past year the incentive for South African players to make the most of their earning power in European or Japanese pro rugby is huge. And they have done so in droves. 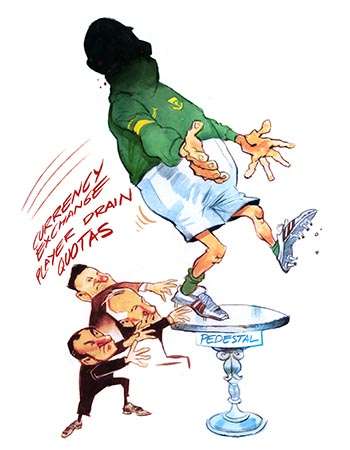 Political interference by the ANC government has also played its part, with an insistence on a quota-based selection policy based on racial criteria rather than outright meritocracy undermining the sport. The government figure of a non-white target of 50 per cent by the 2019 World Cup has pushed even more white players to seek opportunities elsewhere.
However, South African rugby have only themselves to blame for the administrative myopia that has seen them burn an alliance with Northern Hemisphere rugby for an increasingly untenable future as part of the Southern Hemisphere’s SANZAAR block.
Under the new Super 18 format the South African franchises are now expected to travel not just to Australia and New Zealand, but also to Japan and Argentina. This means that the domestic and family lives of South African players is impacted severely, and what should be a pleasure has become a jet-lagged chore.
What’s more, South Africa get the thin end of the wedge financially, despite their broadcasters having by far the biggest viewing figures, and paying more into SANZAAR coffers than anyone else.
This could have been avoided if South African administrators had had the gumption to forge links with Northern Hemisphere rugby, with a potential alliance discussed over a decade ago. Those links would have given South Africa the broadcast advantages of being in the same time zone as their European partners, as well as in terms of logistics of being accessible by an overnight flight.
However, by far the most significant impact would be that the South African Rugby Union would have been working in tandem with nations whose currencies have proved so attractive to so many of their players. It does not take a genius to work out that South African rugby would be in a much better place financially as part of an expanded
Six Nations, with teams playing in a Euro-Afro cup, than it is as part of SANZAAR.
One of the ironies of the current situation is that Oregan Hoskins, the president of the South African Rugby Union from 2006 until earlier this year, has advocated that South Africa should consider leaving SANZAAR and align with the Northern Hemisphere. What a pity he failed to initiate the switch on his own watch. Instead, with the six South African Super franchises losing money hand over fist because they are paying player salaries they cannot afford in order to stop the talent drain, the management of the game is in chaos. The figures are frightening, with a salary bill rumoured to be as much as R60million set against broadcast revenue of only R30 million.
Later this month there will be a talking shop – or in South African parlance, “an indaba” – at which the great and the good of the game will come together in an attempt to find a way out of the mess.
However, the 1995 Springbok World Cup winning fly-half, Joel Stransky, has already decided to have his say, declaring this week that South African rugby is “rotten from bottom up and top down” and needs a radical reform.
Stransky added that he did not see a quick turnaround, saying, “the reality is we are set for long-term pain”.
My belief is South African rugby could find a remedy much more quickly if they looked to the North.