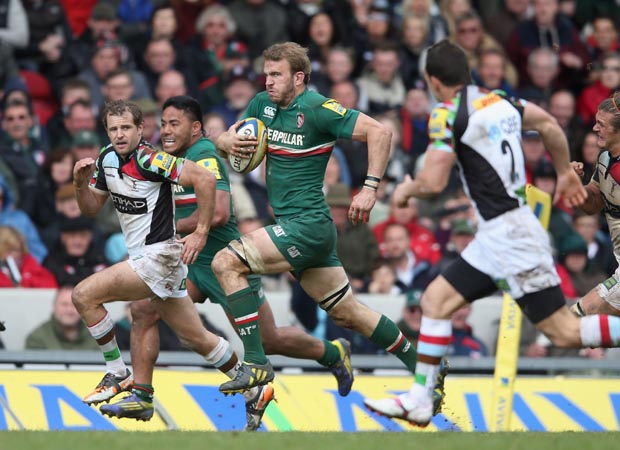 Joe Lydon and Mike Friday used to share the same vision of Sevens when they worked together at the RFU from 2001 to 2004, with the former GB Rugby League star as England Sevens coach, and the ex-Wasps scrum-half as assistant coach. Friday went on to succeed Lydon and become England’s most successful Sevens coach, delivering 11 tournament titles and a silver medal at the 2006 Melbourne Commonwealth Games.
Times change, and Lydon and Friday now have opposing views on the path that the Great Britain Sevens side should take if they want to win gold at the 2016 Rio Olympics. However, what has stayed the same is that the silver Friday’s England side won in Melbourne is the only medal that any of the home nations have won since Sevens was introduced into the Commonwealth Games in Kuala Lumpur in 1998.
Lydon, who was appointed as the RFU’s head of international player development last year after doing a similar role for the Welsh Union for five years, has been given charge of the Great Britain Olympic Sevens programme. Friday, by contrast, has just signed as the USA Sevens coach, with the aim of getting the Eagles through the qualifying stages in the 12-team Olympic tournament.


Friday’s decision to throw in his lot with the Americans came in the absence of any indications that he was part of the bigger Great Britain Sevens picture.
As a consequence, the two men are destined to be on different sides of the Sevens fence at Rio, and that separation is reflected in their approach to the concept of international 15-a-side stars participating for team GB.
As head of the Great Britain programme Lydon holds the cards in terms of overall strategy, and he says, “It is a process I know well because I’d been looking at those who can and can’t play Sevens for 10 years now.”
Lydon says that the experience has convinced him that switching from a 15-a-side environment to the abbreviated game is a complex business, and that only a small minority of fifteens players are cross-over material.
“There are not loads of players who can do it. For example, Phil Greening became a great fifteens and Sevens player, but he will tell you how difficult it was to make the transition. There are not many who can do it – and, given the different fitness demands, I’m not sure there are that many who will want to do it.”
Lydon also dismisses the argument that a GB ‘Super Seven’ drawn from fifteens, and featuring the likes of George North, Tom Croft, Justin Tipuric, Danny Care, Stuart Hogg, Christian Wade, Tom Varndell and Alex Cuthbert, would beat a team of Sevens specialists.
“If I had a team of Sevens specialists I would back them to beat the team of fifteens all-stars every time. I think the fifteens team would be good to watch, but they wouldn’t win anything.”
Lydon suggests that most leading Sevens coaches would say the same thing, and would want the majority of players they picked to be specialists.
Friday sees it differently. “I disagree. It’s a ten-week conversion from a conditioning point of view and after that the fifteens stars could perform. It’s a bold statement to say they couldn’t (meet the Sevens requirements) if they wanted to.”
He says: “The game is still the same as it was ten years ago, and if you put a Jason Robinson on a Sevens pitch he’d cause havoc. I’d say that if you put the best Sevens specialists from England, Scotland and Wales, and put them against a team of international fifteens stars with Sevens experience after a ten-week conversion course, then my money would be on the international stars nine times out of ten.”

Friday adds, “I’d put in a couple of Sevens play-makers who could make them tick, like Tom Mitchell (England) or Colin McGregor (Scotland) do now, and Simon Amor used to for England, but that would do.”
There is plenty of evidence that the cross-over route is a path to success, and it is one that has been well-trodden by Sir Gordon Titjiens, the recently knighted New Zealand Sevens coach. Titjiens’ teams have dominated the pro Sevens circuit, with the Kiwis winning 12 World Series titles, four Commonwealth Games gold medals, and two Rugby World Cup Sevens crowns.
When Titjiens won the first of those Commonwealth Games golds in Kuala Lumpur (1998) his team included Jonah Lomu and Christian Cullen, while other All Black fifteens stars such as Joe Rokocoko and Mils Muliaina also made the transition successfully. He has not abandoned the strategy according to Friday.
“In Delhi (2010) he brought Ben Smith, Israel Dagg, Liam Messam, and Zac Guildford into the team, and for Rio he has not ruled out picking Julian Savea, Ben Smith or Dagg, while Sonny Bill Williams has said he’s keen to play in the Olympics.”
Friday also has no doubt that Israel Folau could make the transition for Australia, despite having no previous Sevens experience: “Chris Latham was one of the stars of the 2006 Commonwealth Games for the Aussies, and he had never been on a Sevens pitch before that tournament. If Folau had that same resolve you would have him in, without a doubt.”
Casting his eye over the GB Sevens landscape, Friday says: “It is no different with George North, Tom Varndell, Christian Wade or Justin Tipuric. Mental resolve – in terms of being prepared for your legs and lungs to be taken to a horrible place more quickly – is the key part, and it’s what all the Kiwi teams have.”
Friday, who had a track record with England Sevens of successfully integrating fifteens stars, Josh Lewsey among them, then asks the crucial question: “The challenge is can GB get these players?”

Lydon says that the process is fraught with difficulty. “It is challenging as we are a conglomerate of four nations, and we have to meet IOC and IRB regulations.”
Suggest that the first foundation stone is to assume that GB will qualify somehow and therefore to pick the GB coaches, because they will dictate the approach, and Lydon comes back to process.
“The first priority has to be to qualify, and England are the nominated (GB) side. So there is a priority already, and we have picked a coach (Simon Amor) for stage one.”
The stage one he is talking about is Rio qualification through a top four finish in this season’s World Series. There are no guarantees. England, who finished fourth last season, face stiff competition from New Zealand, Fiji, South Africa and Australia. If they fail England have another chance through the European qualifying tournament, which would pitch them against France. Miss out there, and it could come down to a repechage play-off to be the 12th team in the Olympic tournament.
Lydon says that due to all the qualification permutations, and the concentration on fifteens with the new season imminent, he has not yet sounded out any potential GB cross-over stars.
“In the GB arena there are so many other elements to focus on, and they are contracted to their fifteens clubs. First we need to consider those players we know are capable, and we are monitoring them. For instance, I know from my time at the WRU that Alex Cuthbert’s time with the Wales Sevens played a massive part in him being capped by Wales and playing for the Lions in 2013, and Justin Tipuric is similar.”
Lydon says that, for similar reasons, no coaches outside Amor have been approached. “If and when GB do qualify, and the likes of Mike Friday and Ben Ryan (now with Fiji) are not available, we wish them all the best. It’s good for them as coaches, and the countries they are working for – and it will be competition for us. Having worked with Mike I know that he is one of the best and most experienced coaches there is. If they were to be available when GB qualify, then they would be in the mix.”
You do not have to be a chess grandmaster to see that the strategy outlined by Lydon points towards the GB Olympic bid being centred around Amor’s centrally-contracted England outfit. The indicators are that Lydon, who says he would like to be with the GB team in Rio in a management capacity, is veering away from the inclusion of anything more than a small smattering of fifteens stars.
He argues that moulding English, Welsh and Scottish 15-a-side internationals into a great Sevens side with such a short timescale after qualification, as well as negotiating the conflicting demands of the fifteens game, presents GB with a uniquely difficult logistical problem. The flip-side of the coin is that overcoming such problems is what he is paid for.
The nub of it is whether Lydon wants to see a GB ‘Super Seven’ win gold in Rio and capture the imagination of the world, and whether he can make it happen.
Outline to him that one very good reason for doing so is because England, based on their recent track record, will not be good enough to win in Rio, and his answer is revealing.
“If you base it on England finishing fourth in last season’s World Series rather than first, then no (they won’t win). However, when Wales won the Rugby World Cup Sevens title in 2009 they started as 88-1 outsiders. When it comes to a one-off tournament the nature of Sevens is that it is anybody’s game within the top ten nations. So, radical overhaul, no, but we do need to maximise on this opportunity.”
The number of tournaments that New Zealand have won, establishing themselves as perpetual Sevens favourites, undermines Lydon’s theory. Sure, the Kiwi applecart is occasionally upset, by Fiji in particular, but you wouldn’t bet on it.
That is why if GB are to become the first Olympic Sevens gold-medallists, Friday’s concept of injecting a new dynamic by introducing fifteens stars into the squad is a gamble worth taking.
*This article was first published in The Rugby Paper on July 27.