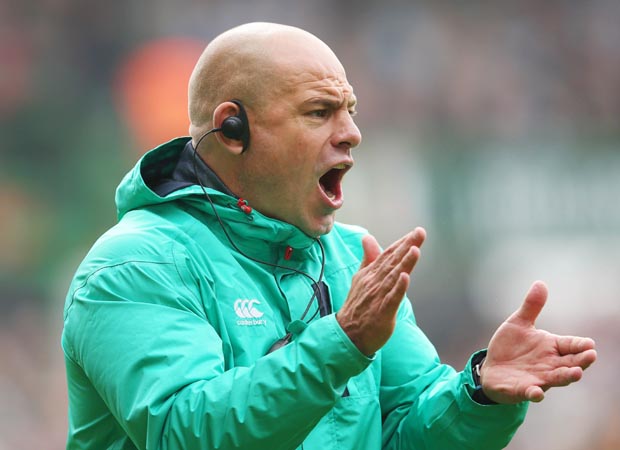 The trials and tribulations of being a rugby fan is a rollercoaster ride full of elation and deflation that must make even the most dedicated fan wonder, why do we do it?
Leicester’s woeful start to the season – improved on Friday by the defeat of Quins – has a ring of déjà vu about it and it will be interesting to see if Richard Cockerill’s friendship with owner Peter Toms will be strong enough to break the Leicester World Cup curse.
Since the sacking of Dean Richards following a poor season after the 2003 RWC, it seems that Leicester suffer a dip in form or injury crisis as each World Cup approaches.
Cockerill is an abrasive character with an ‘in your face’ coaching style that has earned him any number of people wanting to see him fall on his face – but I think that is unfair.
He is never short of a quotable outburst that makes him a favourite with the Press and as it is usually directed at match officials, sometimes justifiably. He ruffles feathers but that shouldn’t cost him his job.
Generally Leicester’s style hasn’t evolved – it’s always been a good strong pack, a powerful midfield and a quick back-three. They have a very vociferous, knowledgeable and expectant crowd and it is that crowd that Cockerill must pacify with results or Toms may have no choice but let his favourite hooker go.
Another tough choice was made this week as Derek Richardson decided to take his investment to Coventry.
I say investment because with this move the club that was the Wasps rugby club that I knew and played for will cease to exist.
The relocation from Adams Park to the Ricoh Arena would seem an ideal move for the club who really haven’t had a home since the fateful day in 1996 when they left Sudbury.
However, the move will see Wasps leave a 10,000-seat stadium that they currently struggle to fill to a 32,000-plus seat stadium where there is a danger that, with an average gate of just 5,000 to 6,000 for home games, could make fans feel be a bit like peas in a colander rattling around in the empty seats.
The worry for Wasps is that the day-to-day running costs incurred by having such a large stadium will be hard to cover with the current small fan base and, even though there is an historic rugby crowd in Coventry, building regular support will take time and money.
Money that the club will be reliant on Richardson to provide, on top of what he has already promised for improving playing resources and the extra money will, hopefully, buy the extra time needed to grow the fan base.
It may be that the endless online forums full of Wasps fans proclaiming that the move to Coventry is not about securing the club’s future and all about the property and land that encompasses the Ricoh Arena are right and Wasps RFC were just the icing on the cake that enabled Richardson and Coventry Council to seal a deal that is rumoured to have been in the planning for two years before the Wasps takeover.
What is clear is the move has come as a bit of a shock to the vast majority of the Wasps faithful which, in the modern era of professionalism, would seem unthinkable.
Even though there must always be a certain level of confidentiality with corporate deals, when they involve the relocation of what is a major professional sports club they are usually conducted in a very public manner, keeping fans informed to try to ensure continuing loyalty.
This move is in stark contrast to the two previous moves which were much debated and discussed with the fans and, more importantly, were within a reasonable distance of their traditional home since 1923 – Sudbury.
Also, the move to Loftus Road and Adams Park were, in part, forced on the club by circumstances. First the need for a bigger stadium capacity in line with the PRL requirement led to the move to Loftus Road but when Fulham FC needed a new temporary home Wasps were forced to relocate to Adams Park.
The Coventry move (as far as we know) has been made out of choice by the new owner and not because of the need for a larger ground with all the attendant costs.
If, as is being suggested, the takeover was part of a project to buy and sell the Ricoh Arena complex once development plans are crystallised in a couple of years and then abandon the club to manage by its own devices, it would spell disaster. In rescuing Wasps from almost certain bankruptcy in 2013, Richardson gave new hope to many who were expecting and preparing for the worse.
Since the takeover there has been a slow but steady improvement on the playing side and growth in support but there are still many of us that have historic links to the club that don’t go to Adams Park.
It is easy to understand the frustration of an investor who has stepped in to save a club and ensure its future only to find that nothing has altered, crowds are still at an unacceptably low level with little or no sign that things are going to change.
Something drastic had to be done and Richardson has done it.
Depending on your point of view, Wasps are either on the threshold of a brave new world or the brink of disaster. Only time will tell who is right.
*This article was first published in The Rugby Paper on October 12