Posted on 3rd August 2020 by admin in Latest News, Premiership 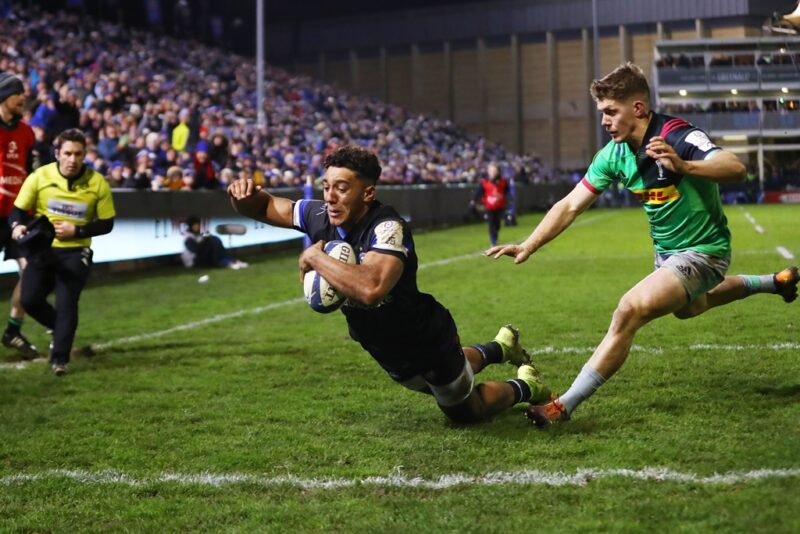 Ambitious Bath flyer Gabe Hamer-Webb has put the club’s stable of international wingers on notice as he attempts to lay claim to a starting jersey in double-quick time.

Academy product Hamer-Webb, 19, shot to attention before the lockdown, notching Champions Cup tries against Ulster and Harlequins to announce himself at the Rec.

Having starred for England U20s in their Six Nations campaign and subsequently earned a senior Bath contract, the ex-Beechen Cliff schoolboy is hot on the heels of illustrious teammates Anthony Watson, Joe Cokanasiga, Semesa Rokoduguni and Ruaridh McConnochie.

“I don’t think things could have gone any better for me,” Hamer-Webb told The Rugby Paper. “Every opportunity I got, whether it was being a travelling reserve, coming off the bench or getting my first start away at Ulster, I gave it everything and it was a real treat.

“I owe huge thanks to the coaches for having that trust in me to go out and play, and to get a first team contract within my first academy year feels great. I’ve been dreaming for so many years of being a professional sportsman at the top and now I’ve got a chance.

“I played in every Champions Cup game apart from Clermont at home and to make that first start alongside Tom Homer, who’s been like a big brother to me, was a big moment. In fact, all our back three boys – Tom, Anthony and Roko especially – really took me under their wing and never battered me down or made me feel that I didn’t belong among them.

“As a first-year academy player that can sometimes happen but they let me express myself and pick their brains, which showed the true character of those guys. There’s no hierarchy, we’re all in it together and now I want to get in our starting XV every week.”

Hamer-Webb does not lack confidence, nor is he cowed by the internationals around him.

He added: “If Anthony, Roko, Joe and Ruaridh weren’t England internationals, I wouldn’t enjoy the challenge as much. It makes my attention to training and doing everything I can off the field much sharper because I’ve got so much competition for a starting jersey.

“It makes it even better to wake up knowing you’ve got to go in and play well, and getting a senior England cap myself is my aim as well. I enjoyed the U20s and it was great to mix with other guys of my age to see how they’re getting on because if you do get a chance to play for the senior side in future, you need to know those boys and have built relationships.”

Hamer-Webb’s physical presence befits a former footballer who played centre-half in the academies of Bristol City and Southampton before choosing to pursue rugby.

He explained: “Football certainly helped me with my mental skills and being a leader – being headstrong and intense. Football’s a skilful game based on repetition to become better and better, so I’ve brought that into my rugby and try to be a perfectionist.

“It’s just little things like waking up half-an-hour earlier to get some stretching done, getting a few extra calories inside me or being more hydrated. I’m quite ‘on it’ with all that stuff because I want to push on and become a great player, not just a standard one.”

Is there a winger he wishes to emulate? “No” adds Hamer-Webb. “I don’t want to be anyone else or get tagged as a younger Marland Yarde or Anthony Watson. I want to be my own player who people think offers something a bit different – I want to be unique!

“I’m not afraid of contact or hard work and, although I probably shouldn’t say this, I enjoy defence as much as attack. I enjoy getting stuck in, it’s all part of the game and I work as hard on that side of the game as I do when it comes to my intensity and scoring tries.

“Speaking to the Bath coaches, they just want me to get on the ball more, come off my wing, be really vocal and assert myself in attack. You can be really good off the ball, but as soon as you’re on it you’ve got to be absolutely lethal.”

Louis Rees-Zammit emerged last year to seize his chance at Gloucester. Hamer-Webb said: “He’s a great example of a young bloke doing well and there’ll be so many games coming up over the next few months that a lot more of us younger lads will get chances.”