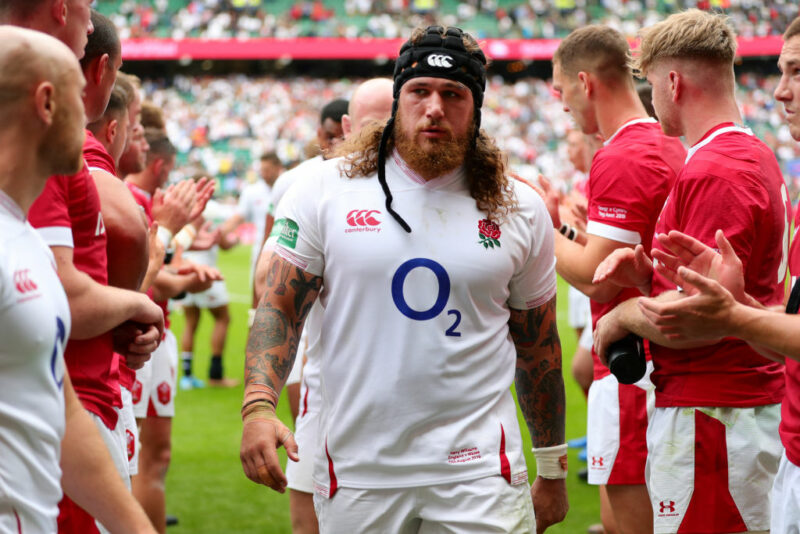 England prop star Harry Williams fears funding cuts in the Championship could hinder the progress of players like himself, whose careers were boosted by a stint in Tier Two.

Williams, 28, failed to break through from Wasps’ academy but reinvented himself during spells at Nottingham and Jersey before earning a second Premiership chance at Exeter, for whom he has excelled over the last five seasons, earning 18 England caps.

Fellow Red Rose front rowers Ellis Genge, Kyle Sinckler, Mako Vunipola and Dan Cole also cut their teeth in level two before hitting the big time, but the RFU’s decision to slash their Championship funding in half threatens to kill off an important route to the top.

Williams told The Rugby Paper: “There’ve been a few negative articles about the Championship but I can only speak for myself and my experiences were only positive. What you get when you’re playing there is a very competitive league, which is especially valuable as a forward.

“Every point matters, you learn some very hard lessons and you’re part of a team where winning is important, so I look back at the two years I had at Nottingham and Jersey very fondly because I definitely learned from that and it’s stood me in great stead moving up.”

Williams added: “If a situation occurred that eradicated the Championship or reduced the standards in it, that’s certainly not ideal. We’ll have to wait and see what the fall-out of all this is but it’s not just about players, there are a lot of good young coaches in there as well.

“It must be difficult for someone like Steve Boden, who was at Jersey but is doing well at Doncaster now, to hear about these funding cuts and I wish all those guys well.”

Meanwhile, Championship clubs chairman Geoff Irvine has played down talk of a breakaway league following the RFU’s controversial decision to slash funding by 50 per cent from next season.

Angry club officials received the news via email as they made their way to a highly-charged meeting with RFU CEO Bill Sweeney and performance director Conor O’Shea at Twickenham on Tuesday.

“There has been no discussion whatsoever or collective meetings about what to do yet (going forward),” said Irvine.

“Because of how the news was delivered and the shock, all we talked about on Tuesday was how we needed to go back to our own clubs and work out how best to deal with this.

At present, Championship clubs receive a £5.9m pot from the RFU, which when divided into 11, gives each of the clubs a guaranteed annual sum of £536,000 in central funding, with performance-related payments on top. Finishing second in the Championship and winning the Championship Cup, for example, is worth £75,000 combined.

Aggregate funding will amount to approximately £288,000 per club for next season. Coventry centre Heath Stevens, who has made over 150 appearances for the club, fears players will walk away.

He said: “If I’m presented with another contract at the end of the season, it’s more than likely I’ll have to take a pay cut. In that event, and the current climate of the Championship being under-funded, I don’t see the point in carrying on playing full-time.

“Apart from the potential of getting into the Premiership and the title of being a Championship player, what is the attraction? It’s certainly not money.”