The UK & Ireland’s largest and only touring rugby legends charity event is coming to a city near you in 2019.
Iconic names in British rugby such as James Haskell, Will Greenwood, Jason Robinson, Kelly Brown, Gareth Thomas, Mike Tindall and Lewis Moody will be live on stage with tales from their decorated careers. Legends at both club and international level, fans can expect an insider’s view on the world of elite level rugby as well as thoughts on the upcoming Rugby World Cup in Japan.
Everyone knows the antics involved in a pre- or post-season rugby tour; the comradery, the togetherness, the banter! You now have the chance to find out what really happened behind the scenes. Is anyone brave enough to ask Mike Tindall about his infamous dwarf-throwing incident?
For Ruck Sake is all about charity, which is why money from the tour is being donated to the RFU Injured Players Foundation as well as causes chosen by each of our guests. There are some fantastic charities being supported from Borne and Brain Tumour Research UK to The Matt Hampson Foundation. Full details are available online at www.forrucksake.co.uk. 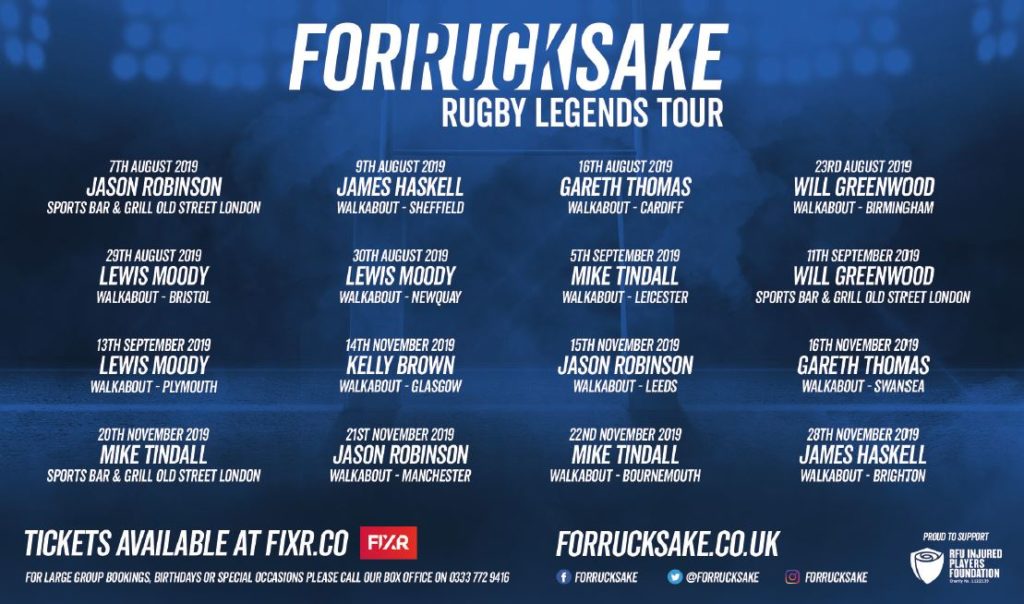 There will also be a charity auction running across the dates. In the build-up to and during the tour there will be some items up for grabs from memorabilia to rugby experiences to holidays and, on the night, guests will be given the opportunity to walk home with anything from a signed ball to a shirt!
In addition to supporting grassroots rugby through the RFU Injured Players Foundation there are special offerings for local rugby clubs, from discounted tickets all the way up to prizes, such as the opportunity to win a training session with one of the legends.
Group bookings and standard ticketing information can be found by emailing: info@forrucksake.co.uk.