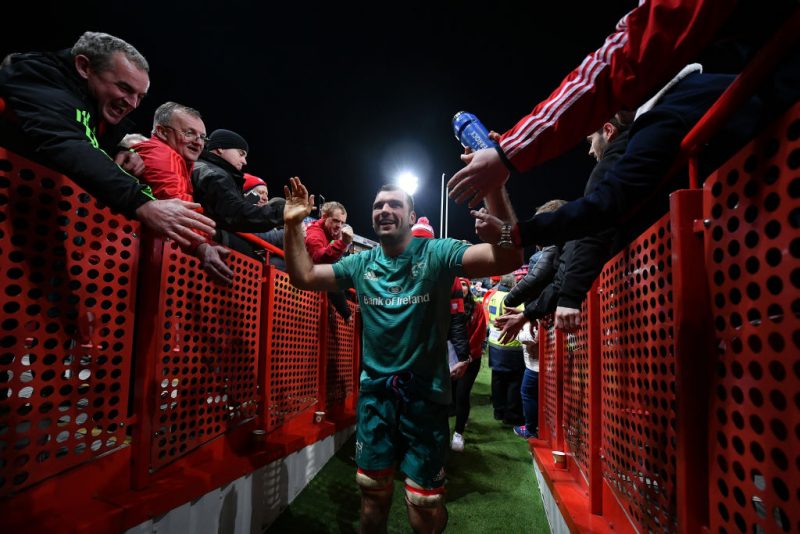 Tadhg Beirne has been ruled out of Ireland’s first two Six Nations fixtures with a knee injury.

The IRFU confirmed the Munster forward would miss the matches with England on February 2 in Dublin and the game against Scotland at Murrayfield a week later, following a scan.

Beirne sustained the injury towards the end of Munster’s 9-7 win over Exeter Chiefs at fortress Thomond Park on Saturday. A win which secured Munster’s progress to the Champions Cup quarter-finals for a record 18th time.

The second row impressed in the tense win over the Chiefs with several key turnovers, but his withdrawal opens the door to someone new to grasp the opportunity.

Ireland head coach Joe Schmidt has called up Quinn Roux, Connacht’s South Africa-born lock, in Beirne’s place. 28-year-old Roux will travel with the rest of the Ireland squad to a pre-tournament training camp in Portugal this week.

Schmidt has also called up Leinster winger Adam Byrne as cover for Andrew Conway. Conway is nursing an injury he sustained in the match against Exeter but should be available for the England clash.

Leinster number eight, Jack Conan will remain in Ireland to receive treatment on an injured shoulder. The injury caused him to miss Leinster’s game at Wasps on Sunday but he hopes to return to full training next week.

Full-back Rob Kearney and prop Jack McGrath will remain with Leinster to get game time in the Pro14 this weekend. They will then link up with the squad ahead of the start of the Six Nations opener following the league clash against Scarlets.