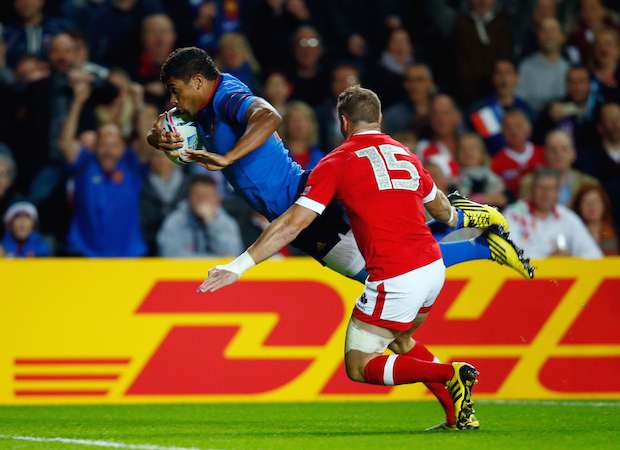 France became the first team to qualify for the World Cup quarter-finals thanks to a 41-18 bonus-point win over Canada in Milton Keynes tonight.
Les Bleus were made to work hard by a plucky Canadian side but with five tries and their third win of the competition they are certain of finishing at least second in pool D.
Ireland are the only team that can prevent them from finishing top but Italy cannot do so even if they were to record bonus point wins over the Irish and Romania in their last two games.
If that were the case and France failed to record a match point against Ireland on October 11, the Azzurri would match their 14-point tally but would not overtake them as France beat them in the first game of the pool.
Wesley Fofana, Guilhem Guirado, Rabah Slimani, Pascal Pape and Remi Grosso all went over for France while Frederic Michalak was imperial with the boot and became France’s highest point scorer at a World Cup with 14 points from the tee.
Canada showed great resilience and scored tries through DTH van der Merve and Aaron Carpenter but they eventually ran out of steam in the last 20 minutes.
Les Bleus made a sensational start as Michalak beat three defenders before offloading to Fofana for the opening try of the game three minutes in.
Michalak slotted the conversion and a penalty ten minutes later to become France’s highest point scorer at a World Cup and give France a 10-0 lead.
Guirado was next on the board going over from a driving maul just before the half hour but France took their foot of the pedal and Canada pounced.
They managed to score twice through Van der Merwe and Carpenter and, in the space of six minutes, they were within five points trailing 17-12.
France managed to settle the nerves and they had their third try of the game when Slimani barged his way over from close range.
Michalak conitnued his faultless kicking with the conversion and the French lead 24-12 at the break.
Canada came out for the second half high on spirit and their efforts were rewarded with two penalties from Hirayama.
Just before the hour, France only had a slender 24-18 lead but Michalak’s second penalty gave them some room.
Former captain Pape sealed the win and sent France to the knock-out stages before Grosso scored on debut for try number five.