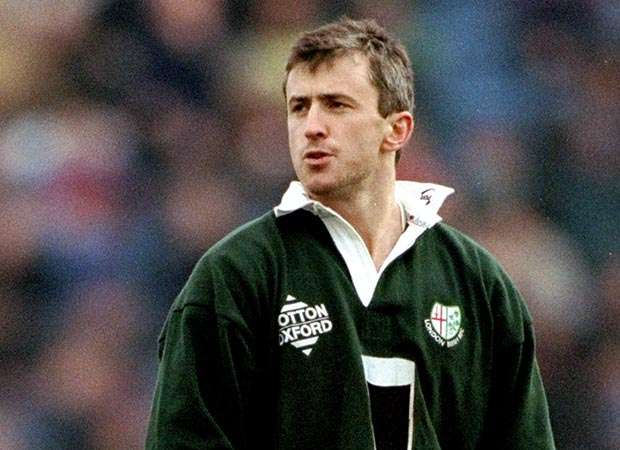 When the game turned professional I was playing for Blackrock College and Leinster and had a handful of Ireland caps. The IRFU offered me a contract to stay at home but Clive Woodward and one of my best mates, Conor O’Shea, persuaded me to put my accountancy studies on hold and throw my lot in with London Irish.

At that point I’d got a bit stale playing in the All-Ireland League, where you could guarantee seven of the 10 league matches would be played in pouring rain, on terrible pitches – so it was hard to get a pass out on the wing!

As it turns out Clive only lasted five months in the job after a terrible start to the season and Willie Anderson came over from Ireland to replace him. We continued to struggle and it took tense relegation play-off wins over Coventry and Rotherham to secure our top-flight status in my first two seasons at the club.

I once scored four tries in a game in the Premiership, against Northampton in the 1998/99 season, but my best performance for Irish to be against Quins in April 1998. I scored two tries and kicked 22 points for a 32-point haul and that stood as a league record until Andy Goode broke it last year. It was one of those days when everything went right for me and the team. We won 62-14 and I kicked 10 from 10, including two touchline conversions into the wind.

I’d put goalkicking on the backburner during my Leinster days and it was only when David Humphreys threw me the tee during a match after a few shockers that I took it up again.

Dick Best was in charge of Irish by then. He’d shaken things up and there was disquiet among supporters about the lack of Irishmen; there was only myself, Conor, Justin Bishop and Kieran Dawson. However, the fans were soon won over by the style of rugby that we played and I remember the crowds being really vociferous. Dick had unearthed quite a few

Playing well for Irish won me an international recall, five years after the first of my eight caps, against Australia and it was a thrill to walk down the tunnel at the old Wembley for our game against Wales in the last 5 Nations in 1999. Even better still, we won – a rare occurrence back then.

My only other win in an Ireland jersey was also against Wales, at Lansdowne Road three years earlier, which I marked with my only try in international rugby. Arwel Thomas’s clearance from a missed penalty attempt went straight to me and I ran the ball back. Emyr Lewis was about to smash me so I chipped ahead and regathered it, after a bit of a juggle, and scored. Luckily the French ref didn’t believe in knock-ons!

Having missed the 1995 World Cup I wanted to play in the next one and was due to go on tour to Australia in 1999 until I tore my hamstring playing against Wasps. I didn’t make the squad and before the World Cup started, I turned out for a Premiership All-Stars XV against England and was promptly stretchered off with a snapped cruciate ligament.

After about 13 months I returned to club duty for Harlequins, but it was never right again. I could feel my knee wobble and I had to call it quits. After about six months without pay I was fortunate to get a role with the Rugby Players’ Association, initially in England and then in Ireland. I’m now running my own agency Navy Blue, a Dublin-based sports management agency.

*As told to Jon Newcombe