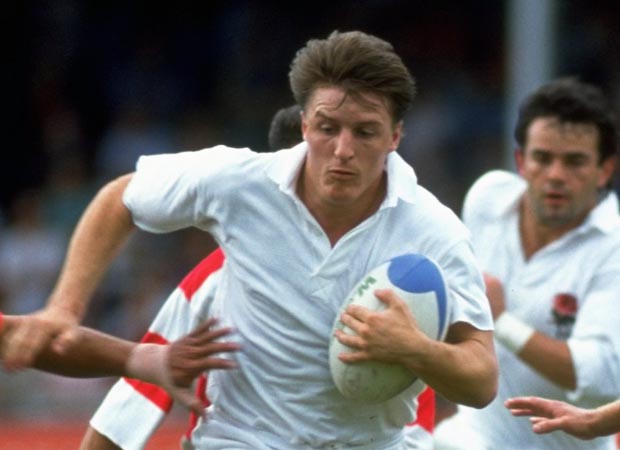 I won four caps for England, the last two against France in Paris, and we won both matches. I doubt many players will be able to say that. The first game, in 1992, was a brutal affair. Two of the French front-rowers got sent off and we won quite convincingly, 31-13.
I came on midway through the first half after Rob Andrew suffered a nasty gash to his head. Besty (Dick Best) found me getting myself ‘prepared’ in the changing room toilet. It was a cauldron of noise in the stadium that day, you couldn’t hear any of the calls. Within a minute of being on their openside Jean-Francois Tordo gave me a crack and broke my nose. Welcome to Paris!
That was nothing though compared to the rest of the injuries I suffered through my career, to say I had more than my fair share is an understatement. I once suffered a suspected broken neck playing Sevens for Quins.
Thankfully that didn’t prove to be the case but it still troubles me to this day when I’m sat in front of my PC. Once, on the Friday before an international against Wales, I tore my hamstring in training, denying me the chance to play at Twickenham in front of family and friends who’d made the trek down from Cumbria.
I also broke my ankle the week before Rob announced his retirement, and missed three whole seasons as a result. I was regarded by many as his natural successor in the England No.10 jersey but Mike Catt got the opportunity instead. Talk about ill-timed!
If you’d have told me when I was first starting out at Aspatria that I’d go on to be an England international – and play for the Barbarians in places like Siberia – I wouldn’t have believed you. But it was a game against Wasps, in the fifth round of the John Player Cup, which opened my eyes to the possibilities.
Rob and Nigel Melville were the opposition half-backs but people said myself and scrum-half George Doggart were the better partnership on the day. Up until then, players like that had seemed like demi-gods because you only ever saw them playing in big games on TV. It was only when they scored a try in the final minute that the game was lost, 13-6.
After spending a season with Sale I moved down south to join Harlequins, where I spent most of the Nineties. My background was in construction management but Peter Winterbottom helped get me a job in the City which made life a lot easier because it was Monday-Friday, 9-4.30 and meant I could train every evening.
During my time at Harlequins we reached two Pilkington Cup finals. We won the first against Northampton in 1991 and lost the second against Bath the following year. Both went to extra-time. I don’t remember much about either, the games went by in a bit of a blur.
But I do recall popping up a pass for Simon Halliday to score an important try against Saints. Against Bath, I played full-back for the first time. We came very close to an upset but Stuart Barnes did what myself and Paul Challinor had not been able to do, despite several attempts, and dropped the match-winning goal with seconds remaining. I think it never got further than eight metres from the ground, but somehow it crept over.
After leaving Harlequins I had short spells at Bracknell and Worcester. Geoff Cooke tried to persuade me to go full-time at Worcester but I didn’t fancy it and ended my playing days at Wharfe-dale, where my wife Sally hails from. I had a fabulous three seasons there. National One is a decent standard and I played with some fabulous players. We’ve still got a place in Grassington and we watch Wharfedale whenever we visit.
*As told to Jon Newcombe