(Photo: Getty Images)
By Nick Cain
JOHANN Ackermann has steered Gloucester out of their lengthy spell in the doldrums in his first season at the club. A mid-table Premiership finish may not sound like a reason to break out the champagne, but the sense of purpose the South African strongman has brought with him to Kingsholm might well be.
Ackermann has transformed a team that had been mired in mediocrity year-on-year, with no appearance in the Premiership play-offs for a decade, into one with a spring in their step and the clear aspiration to once again be a major player in English club rugby.
Gloucester are not there yet, as their disappearing act against a highly motivated Bath outfit proved to the dismay of the full house at Kingsholm last weekend. However, this time at least their supporters have the important consolation prize of top tier European Cup rugby being secured for next season, and also the chance to win the European Challenge Cup for the third time in their history if they beat Cardiff Blues in Bilbao on Friday night.
They know, too, that Ackermann, a straight-talking Afrikaner, would not have let his players off the hook for their slipshod effort against Bath. The physically imposing former Springbok lock has that aura of being a man on a mission, and it was evident as he sat down to deliver his post-match verdict to a radio reporter.
Ackermann is not one for histrionics, but there was also no doubting the resolve in his clipped South African delivery: “Obviously, I’m highly disappointed. We knew they would be dangerous with nothing to lose, and we gave them a dream start. We were just not good enough today. Everything we did went wrong. It was a big lesson for us, and a big body blow when you look at the season as a whole.”
There was no window-dressing, and no excuses – just a clear statement from a coach who had every reason to expect better.
That transparency goes a long way to explaining how Ackermann – who attracted Gloucester’s attention due to the impressive salvage job he did on the Lions, the Johannesburg-based Super Rugby franchise – has succeeded in getting Gloucester back on their feet. 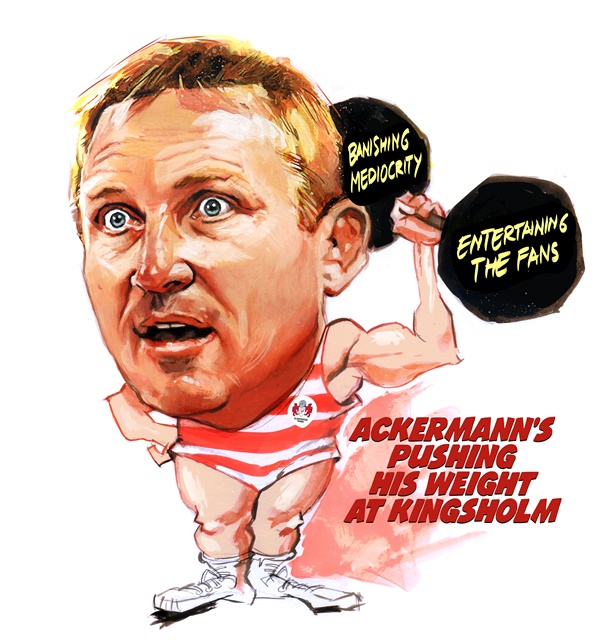 This season’s improvement started with Ackermann, whose eldest son Ruan, an abrasive back rower, has joined him at the club, going back to basics and insisting on greater commitment in defence. It translated into Gloucester being very difficult to beat at Kingsholm, losing only twice at home in the Premiership (to Newcastle by a point, and Bath) – however, it was on the road that the growth in team spirit was most evident.
In a radical departure from type, Gloucester also managed notable away wins at Bath, Newcastle and London Irish. They made an even bigger statement in the European Challenge Cup quarter-finals by beating Connacht in their stronghold at the Sportsground – a notoriously difficult place to get a result.
A performance which combined defensive backbone and attacking flair in equal measure saw them win the day 33-28, and it augurs well for their promotion to the top tier tournament next season.
Not all South African transplants to the Premiership are success stories, but the word from Kingsholm is that Ackermann – whose wife and three children have joined him in Gloucester – speaks the right language, despite Afrikaans being his first tongue.
Although he is a hard task-master on the pitch it soon became clear that he was very much a players’ coach who impressed his squad with his willingness to communicate with them about individual performances and targets.
He also quickly banished the idea that as a former South African Test lock he would be pushing a limited set-piece, bash and kick tactical approach. Instead, he gave the Gloucester men the freedom to play what is in front of them, giving them the green light to be adventurous without any reprimand for doing so if it didn’t work out – with the proviso that it wasn’t plain daft.
The ups and downs in Ackermann’s own life experience has probably sharpened his empathy with players. He hit the wall when he was banned for steroid abuse for two years at the height of his rugby career in South Africa, and it cost him his job, and his car, putting him on the breadline in a country where there is no welfare safety net.
Religion helped him to rebuild his life, but although he is a devout church-going man, who revealed that he asked God to give him guidance in making his decision about moving to Gloucester, he does not push his belief on others. However, he does believe in everybody having a clean slate to start again.
He told the Gloucester squad when he arrived that reputations counted for little with him and that what matters is what players do in training and on match day.
The upshot is that there has been a new selection dynamic with young forwards like Jake Polledri, Lewis Ludlow and Freddie Clarke coming through strongly this campaign. The arrival of a gritty lock like Ed Slater and the resurrection of a backline talent like Henry Trinder have also added to the new brew at Gloucester.
Even so, there is no doubt that the chief alchemist is Johan Ackermann.