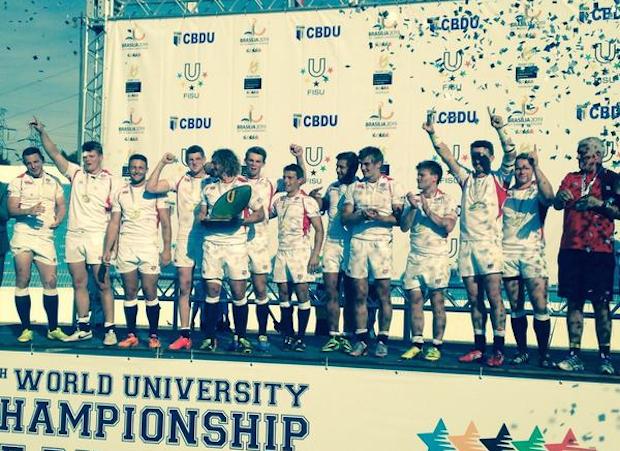 Great Britain Men’s University 7s have retained their World Championship crown after beating Belgium 17-7 in the final of the FISU World University Championships in Campos, Brazil.
The successful defence of the trophy comes two years after victory over France in the 2012 Championships in Brive. There was also an individual honour for Britain as Teesside University’s Aaron Myers was awarded Player of the Tournament.
Great Britain started the tournament in fine form, beating Canada 40-7, but had a set-back in their second game, going down 12-5 to France. But after beating Namibia 43-7 and Japan 17-14, Britain then beat hosts Brazil 12-10 in the semi-final to set up the final against Belgium.
Despite going 7-0 down to the Belgians, Great Britain hit back and a try from Robert Coote and two from Ruaridh McConnochie gave them first place.
Team Manager Phil Llewellyn said: “We’re extremely proud of the guys, particularly for their performance against Belgium. They were brilliant for the full 20 minutes and certainly saved their best for the final – which was very pleasing.”
Head of International Player Development Joe Lydon added: “It’s a great achievement for everybody involved and it’s pleasing to see the partnership working between England Rugby, England Students and BUCS. Huge credit goes to the coaches, support staff and the players for this win.”
Great Britain Women had mixed fortunes in the tournament, finishing fourth after semi-final defeat against Canada, but staged a dramatic comeback in their quarter final against Japan – coming from 10-0 down to win 14-10.