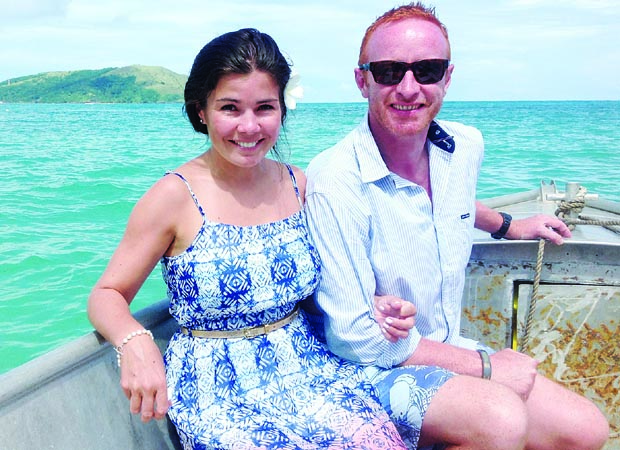 Stepping down from the England Sevens head coach role after six years in charge last August, Ben Ryan was set to take a year out and work as a consultant for UK Sport with the dream of leading Team GB to the Rio Olympics in 2016.
But a Skype interview in the middle of the night in his Teddington home turned his world upside down.
In the space of a few weeks, he packed his bags, took his wife Natalie with him and travelled to the other side of the world to become Fiji Sevens head coach.
A year on, and after leading the flying Fijians to third place in the HSBC World Series including two tournament wins in Dubai and Tokyo, I met Ryan in a coffee shop at London’s Waterloo Station where he tells me about his roller-coaster ten months in charge of the most famous Sevens team in the world.
“From the World Cup in Moscow, I realised I was going to lose the England job. There are many things about how the RFU dealt with the situation that I wasn’t happy about but you’ll have to wait for the book,” he told The Rugby Paper.
“I was going to do some consultancy for a year and had a job lined-up with UK Sport. I had a few offers from different countries and nearly went to one on a part-time basis but Fiji came knocking on the door.


“I had the interview on Skype at 3am but the guy who did the interview was sacked half an hour after the interview went down. So I thought that was the last I would hear about it but a week later I got an email saying the job was mine if I wanted it. I had a chat with Natalie and we decided to give it a go. As a Sevens coach, being involved with Fiji has to be top of your bucket-list but it was a big shock to move to Fiji.”
The way he got the job should have served as a warning sign of what he could expect in the Pacific Islands. Once he arrived in Suva, the change from the England Sevens set-up was drastic.
There was no plush Lensbury Hotel as team base, no ultra-modern gym, no backroom staff, the pitches to train on were flooded more often than not and the only team kit they had was a T-shirt. As for his salary, well, the federation could not afford petrol for the team bus so it became less than a priority.
“As soon as I got there it was pretty apparent they didn’t have the money to pay me. I quickly realised it was going to be the case for a few months so I just took it on the chin. It was one of those situations where there was no point arguing,” he said.
“We had some savings so we survived but I was pretty disappointed when someone from the federation leaked it to the media. I had to come out and confirm the rumours but from January the government helped out and sorted everything out.
“The only problem was that once I started getting paid, the IRB stopped our funding because of the military coup. We didn’t have money for the balls, water, kit or even petrol to take the boys around in the bus.
“We went to the first tournament on the Gold Coast with only a team T-shirt. The kit arrived the day before and the sizings were wrong but the players got on with it.

“Other players from different countries would have been quick to say something but the lads never complained. They’re used to having very little.”
With rugby, and more specifically Sevens, as the national sport, Ryan is now a superstar and, with his pale skin and ginger hair, stepping out of his house incognito is mission impossible.
Everyone wants a piece of the Sevens national head coach and popping to the local shop often turns into a two-hour trip.
But if the fans welcomed him with open arms, Ryan reveals the initial contacts with his players were not as smooth. He said: “The players were cautious with me at first. I could tell they respected me but they didn’t say a word. It was very much a one-way traffic. I’d talk and they would just listen and nod. I had no idea whether they understood me or not.
“But they quickly realised I trusted them and I was going to be consistent with selection telling them why they had been picked or why they had been dropped which was a first for them.
“They’d learn about being dropped in the press and never knew the reasons why or what they had to do to get better. They became a bit disillusioned about the coaches. They had players picked once and playing in every game of a tournament but never playing again.
“The language has been the biggest barrier when I arrived but I hope to become fluent. I tried to pick up the most-used words quickly and build on that. They appreciate that I’m trying to learn their language.”
On paper, with his players’ natural talent and his English structure, Ryan and Fiji could become almost unbeatable and they showed that in Dubai when they inflicted a 44-0 record defeat to the All Blacks.
With the Rio Olympics looming, the key for Ryan is to condition his players to perform at this level consistently but again it is not as simple as training hard – it needs a culture change.
He said: “The semi-final in Dubai is the perfect example of what we can do. It was flawless attacking rugby but our defence was just as good. But it will take some time for us to do it regularly.

“Most of the players have the same strengths. They’re evasive, brave and robust. But they also have the same weaknesses. They’re probably not fit enough because they don’t train at a high-enough tempo. They often play with a bottle or ball without grip and it’s all about the offload so long passing is not great.
“It’s the same problem, all the way to the minis, with tackling. Because everyone tries to offload, they all tackle around the neck because that’s where the ball is. It’s not malicious, just poor technique.
“Same with the breakdown. There are hardly any breakdowns in a game and I haven’t seen anyone practising clearing out on the beach. You can make huge gains very quickly on these things.
“I’ve got to see as many players as possible so I try to go to as many tournaments as possible by car, boat and sea-planes. They have 64-team tournaments over there in crazy conditions but the level is very high. Playing rugby is Fiji’s moment in the sun especially with Sevens. The whole nation stops when the Sevens team are playing it’s just ridiculous.
“My wife was there for one tournament and she said people would just cram around a TV and go crazy. There are fireworks when we win. People would be waiting for you at the airport with food and presents.”
With his contract running until 2016, Ryan will not lead Team GB in Rio but making history with Fiji is now his ultimate goal. “I’ll leave after the Olympics but, hopefully, I’d have left a legacy and a medal behind,” he concluded. “Bringing back the first Pacific Island Olympic medal is what drives us all. We’re looking to make history in Rio.”
NICK VERDIER
*This article was first published in The Rugby Paper on June 29.