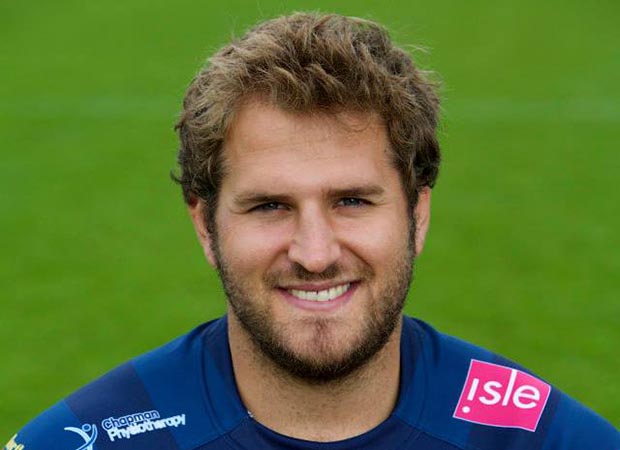 1. Hubert Buydens – The Cow Head as he goes by. This guy always gets over the gain line and rumbles when he carries. I guess he’s got that Saskatchewan farmer strength in him.
2. Ben Hunter – My teammate at Doncaster, this guy can do it all. Great darts in the lineout, awesome scrummager and can run a seriously hard line. One of our top guys last season.
3. Colin Quigley – Played with him at Scottish, now Doncaster. May look like Father Christmas, but he’s an old creepy Scot with a bad back.
4. Paul O’Connell – One of my first caps was against him in at Thomond Park in 2008. Tough day.
5. Jamie Cudmore – Great guy and he’s had a cracking career (and still going strong). Sorts me out with lots of kit because he’s such a big dog in France.
6. Jebb Sinclair – The only guy whose gum shield doesn’t fit in its case because his jaw is too big.
7. Julian Salvi – I played a season with him in Sydney and back then you knew he was going far. Now one of the top flankers in the Premiership.
8. Mark Bright – Played with him at London Scottish and this guy knows how to play. He scored another mountain of tries last season and teed up both of mine for the club.
9. Phil Mack – One of the leading servants of the Canadian 7’s, with well over 50 tournament caps.  He’s got some serious wheels and skills.
10. Ander Monro – ‘The Beef’ had an unbelievable 2011 RWC for us, slotting drop-goals and running the show in every game. Plus for a little Scotsman (with a Canadian passport) he put in some serious sticks in defence.
11. DTH Van Der Merwe – This guy has had a ridiculous year, hat-tricks and semi-final winning tries are just a couple of highlights. On top of that, his highlights reel with Canada is unbelievable.
12. Sonny Bill Williams – We lined up to face the Haka before we played the All Blacks in the 2011 RWC and I caught this guy looking back at me.  I knew he was going to carve up… and he did.
13. Brian O’Driscoll – Another I faced in that Thomond Park match in 2008. His career speaks for itself, he is basically like another No.7 out there and I would say it’s good thing for us that he won’t be suiting up for this year’s RWC.
14. Jeff Hassler – The one and only fat speed. A late convert to rugby but this guy can motor and man, can he finish. One of the Ospreys’ top players, now back to full fitness.
15. James Pritchard – Top points scorer of all time for Canada, he had his testimonial this season for Bedford and he is pushing for his fourth World Cup this summer. Few people can say they’ve achieved all that.