Posted on 6th November 2020 by admin in Featured, Features 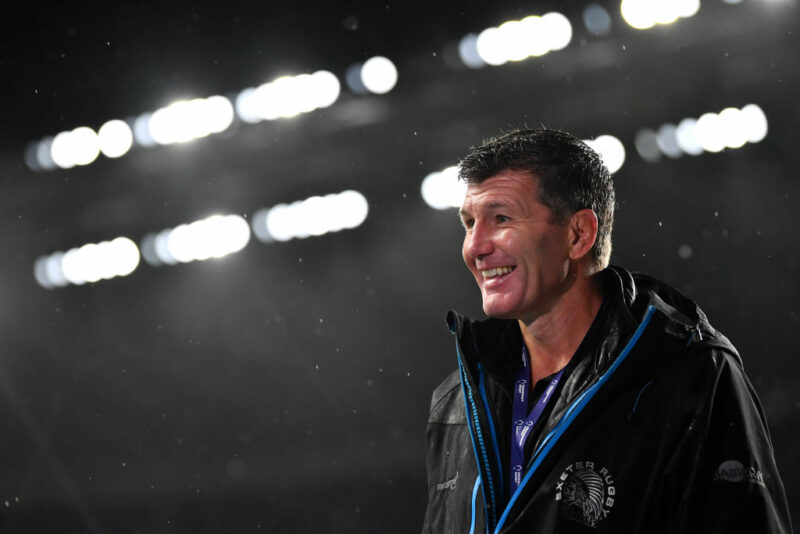 Exeter director of rugby Rob Baxter has challenged his men to rekindle their never-say-die spirit next season after pinpointing some of the defining moments that helped his side reach the summit by becoming Premiership and Heineken Cup champions.

Chiefs’ long haul from the Championship culminated in last week’s rain-sodden 19-13 Premiership final victory over Wasps – a ‘double’ clinching performance that encapsulated the ability of Baxter’s side to win tight games in trying conditions.

A week earlier, late defensive heroics had contributed to an equally memorable 31-27 Heineken Cup final win over Racing 92, meaning Exeter have now succeeded Saracens as the side everyone wants to beat with a new campaign three weeks away.

Baxter told The Rugby Paper: “The challenge now is to maintain that level of focus and our ability to stay in the fight whatever’s happening around us. We’re going to be challenged on that because as much as it’s a physically-driven thing, it’s also massively mentally and emotionally-driven – and we’ve got to make sure that doesn’t wane.

“We will have a target on our backs, but surely we’ve had that for a few years now? If you’ve got to five successive Premiership finals and won what we have, you don’t go into a game with people thinking it’s going to be an easy game against you. I think we’ve learnt to deal with that and that’s really good pressure to have at any stage.

“When I look at next season’s Heineken Cup draw, for the first time we worked our way to being top seeds and we’ve ended up drawing Toulouse and Glasgow! But that is what it’s going to be like, it’ll be tough all over again and that’s the exciting part.”

With key players set to be absent for the early weeks of next season, either through international call-ups, rest or surgery, Baxter will throw down the challenge to his wider squad to pick up the baton and make first team shirts their own.

He added: “Guys like Tom Hendrickson and Sam Hidalgo-Clyne came in and did really well for us last season and it’s the wider squad outside the international guys who are likely to make a mark at the start of the new season.

“There’ll be opportunities around the second row and Will Witty and Tom Price will have huge opportunities to put themselves forward, while it will be interesting to see if someone like Don Armand can make a case at lock.

“With Jack Nowell having an operation, Tom O’Flaherty and Olly Woodburn might realise their desire to play together on the wing, and with Stuart Hogg away and Phil Dollman retiring, there might be an opportunity for Josh Hodge to step up at full-back.

“Alex Cuthbert is going to be fit again so there’s a chance for him to start the season flying and there’s an opportunity at hooker with Luke Cowan-Dickie having minor surgery, so does Elvis Taione come back or does a younger man step up?

“On the whole, we’ve just got to make sure we’re a very competitive unit again because that’s what you need to be in the Premiership. You need to collect points over a long period and that’s what the battle will be about all over again.”

We’d lost two of our opening four Premiership games and it felt like we had one eye on the Heineken Cup. La Rochelle were a fancied team so to win 31-12 over there was a top-level performance that showed we were ready to fly into Europe.

After beating La Rochelle and Glasgow, we went to Sale in the Heineken Cup and Sam’s tackle on Marland Yarde as he was about to dot down was critical in a two-point game. You look at that now and think, how important was that?

As a club we needed to get this fixture out of the way after the salary cap stuff and needed a win to give us confidence in how we’d perform in big games. We went at it hammer and tongs, won 14-7 and all of a sudden it felt like we could beat anyone.

Quite a few teams might have settled for a losing bonus point but we pushed for four tries and a high-scoring draw (31-31). If we hadn’t got those three points we would never have got a home semi-final.

We had a leadership group and prior to that Glasgow game we decided to make him captain because he was the guy calling the shots. He wasn’t with England so that went hand in hand and he’s just gone from strength to strength and done the job.

The attitude of our players between March and July was fantastic and that’s huge credit to them. We gave a clear message that we expected the season to be played out and they all stayed on top of their fitness, which allowed us to drive on when we came back.

7. Bristol and Northampton away post-lockdown

People described us as having second teams out but the truth is our bench from the weekends started and other guys who came in showed we had 30 players who could be really effective. Those two wins ultimately counted for a lot.

People will look at a 59-7 result and ask why I mention this one, but the drive from the players to peak at their individual distances and heart rates for 80 minutes and beyond told us that we had a group of players who understood what was required.

Probably the most important coaching decision we made during lockdown was concluding that lack of clarity might derail our momentum. So, we didn’t use that downtime to rip our game to pieces, we just tried to make our strengths super-strengths and remain consistent.

Rob Hunter, our forwards coach, has been fantastic in how he’s educated people in their roles within five metres at both ends of the field. That’s what you’ve seen and against Racing 92 and Wasps, we came up with big plays in attack and defence to win those finals.