Guscott column: Exeter Chiefs will need all their gumption to win Champions Cup

Posted on 13th October 2020 by admin in Columnists, Features, Jeremy Guscott with 0 Comments 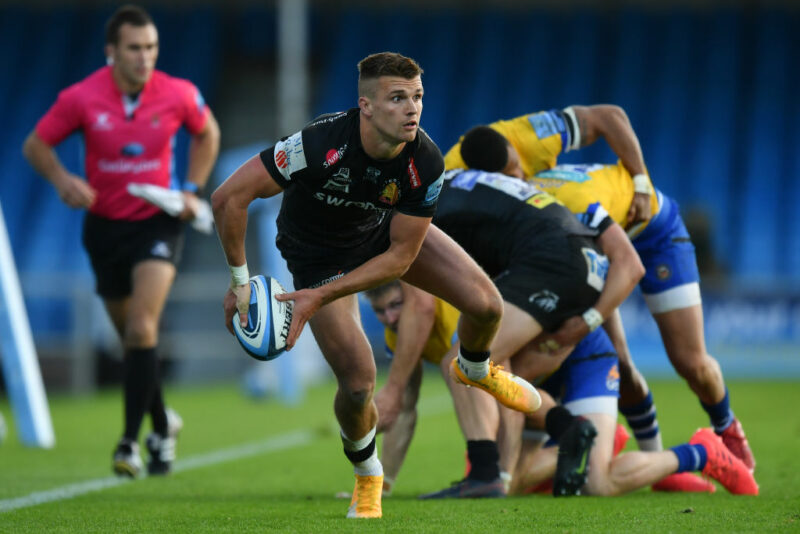 HAVING the European Cup final at Ashton Gate in south-west England is helpful for Exeter, because logistically it’s much simpler for them than their French opponents, Racing 92.

If I was Racing I’d want to get to Bristol as soon as possible by getting the travel from Paris done early, and getting bedded-in with my training facilities sorted, so that the build-up to the final is as smooth as it can be. However, like everything to do with coronavirus, it’s a question of what they are allowed to do.

Luckily, Exeter don’t have to think too hard about any of that, because Ashton Gate is less than an hour and a half up the motorway from Sandy Park – which is the shortest journey they have to make for any of their Premiership games. The Chiefs have also probably become more accustomed to ‘bubble life’ than Racing, mainly because the Premiership restarted after lockdown some weeks earlier than the Top 14.

However, because there’s no crowd, it will be quite a sterile environment in every sense, which makes it a level playing field in all areas except logistics. It’s also worth taking into account that this Racing side has stacks of international players who are used to travelling to different environments and adapting to them before big games.

Exeter have been smart in the way they have handled this European Cup campaign, because they have eliminated some of the danger zones by securing home games in the knock-out stage, hosting Northampton in the quarter-finals and Toulouse in the semi-finals. By doing this they were able to rest a few of their key players after the semi-final against Toulouse, with most of their first team given a weekend off before yesterday’s Premiership semi-final play-off against Bath. This will mean that, irrespective of that result, they should have their legs back by the time they face Racing.

One of Exeter’s main weapons is that they are virtually never repelled when they get into the opposition 22 without doing some damage. It seems as if nine out of ten times they will come away with points, whether it’s a try or a penalty. The difference this time is that they have not yet faced this back-to-back intensity of big matches before, and with so much at stake in two competitions it is a serious challenge.

The good thing is that Rob Baxter gives it to us straight when he talks to the media, and you can be sure that the Chiefs players get double that in terms of directness when he talks to them. He is sure to remind them that they cannot look ahead, and not to anticipate anything further than what is in front of their faces.

Racing can be incredibly potent and dangerous, and will believe they have as good a chance of becoming champions of Europe as Exeter. Before the start of this season’s European Cup most people’s favourites to win the title would have been Toulouse, Leinster, Racing, and Clermont, with maybe Saracens and Exeter a little further down the list.

However, there is no doubt that Exeter have taken another step forward over the course of this season, and that their pack has had a big influence in that advance.

My only reservation about the Exeter forwards is that while Luke Cowan-Dickie, Harry Williams, Tomas Francis, Alec Hepburn, Jonny Gray, Sam Skinner and Sam Simmonds are superstars locally, and are all internationals – with Scotland second row Gray the most experienced – there is no one in the pack yet who has the world-class profile of a Billy Vunipola or Maro Itoje.

For example, Vunipola has made 46 starts in his 51 England Tests whereas Cowan-Dickie has made only three starts in 23 Tests, and while Sam Simmonds, who has seven England caps, scores lots of tries at club level and is a huge threat, he is a small No.8 (6ft and 16st 2lb). Most of the No.8s in international rugby are comfortably over 6ft and 16stb 7lbs, unlike the Chiefs man.

Instead, Exeter are renowned for not only their collective strength in the pack, but their strength-in-depth, and a lot of how they have become so formidable is that they have two packs of similar strength with interchangeable international front rowers, locks, and back rowers.

This back-up, and the ability it gives Exeter to sustain pressure, breeds confidence.

When Baxter was interviewed during the match against Toulouse, he was typically composed despite his team being behind on the scoreboard. The Exeter DoR said that after a slow start he expected his team to get stronger as the match went on – and that’s exactly what happened. The Chiefs have that belief that they will come through if they keep applying pressure. What you see with Exeter is that they are more structured than most sides. What they do seems more practised, and more accurately applied and delivered, than most of their opponents.

It is a contrast to Racing, who have some monumental individuals, some powerful, some brilliant. Backs like Finn Russell, Juan Imhoff, Virimi Vakatawa, Teddy Thomas and Simon Zebo can produce match-winning moments. They also have an insurance policy because goal-kicking scrum-half Teddy Iribaren is pretty accurate from the tee.

The thing with French sides like Racing is that if they break tackles and find offloads they all come flooding through. It’s like a dam breaking. They are energised, and will find a way to take and give a crucial pass to keep a scoring move going. On the other hand, it seems sometimes as if they are less fit because their game is more unstructured. It’s the French way – and therefore it looks less urgent.

After the game against Toulouse, Baxter talked about forcing the French side to constantly get off the floor and make tackles as being a key component in Exeter’s victory. But Racing may be able to ask the same questions of Exeter, with Vakatawa challenging Henry Slade and the Chiefs midfield to keep on making tackles. Racing also have strong carriers in the pack, like hooker Camille Chat, and can pound from all angles.

It is a fascinating final, and I’m really looking forward to being at the ground to commentate for Five Live. They are two very evenly-matched teams, and although Racing have the edge in pace and power in the backs, Exeter are relentless in building pressure. The difference is that the Parisians do not necessarily work as a unit, whereas Exeter are all on the same page.

Even so, Exeter are going to have to get some distance ahead to be safe, because Imhoff’s winning try in the 76th minute against Saracens showed that as long as Racing are within a score, the game will not be won until the final whistle.

This is just too tight to call. I applaud Exeter in reaching the European summit, while Racing, who have lost in their previous two finals, may think this is their time. However, if Exeter play as well as Saracens (2016) and Leinster (2018) did against Racing, then they could return to Paris without the trophy again.

It should be like watching two stags locking horns in rutting season to find out who’s the daddy. But what I hope is that whoever wins will have thoroughly deserved to thanks to their own merits, not just through the errors of the opposition. It should be a cracker.