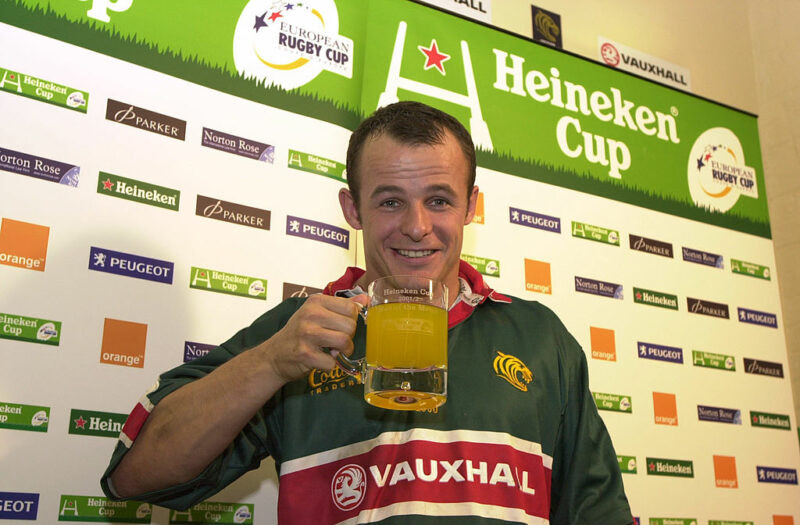 SO now, in this most unusual and mind-bending season, we finally have the two finalists for the 25th anniversary European Champions Cup, or the Heineken Cup as my generation will always call it. Not a bad time to reflect on its humble origins.

Back in the mists of time I worked very closely with Heineken when they ran the Heineken Welsh Championship, compiling their weekly ‘Newswire’ update and team by team previews from London at Hayters Sports Agency which, in those pre digital days, we cranked out on something resembling the Caxton printing press.

Although grateful for the contract it always struck me as slightly odd, the logical thing to do, surely, was to base that entire operation in Wales?

Heineken – unlike many rugby administrators – were however thinking big from the off, they didn’t want to be pigeonholed geographically as small parochial players on the rugby stage. They wanted their Welsh leagues to be seen as a mere branch of a much bigger core rugby operation. From the off they were eyeing a Pan- European tournament.

I recall discussing all sorts of possible formats with Heineken suits at the King and Keys in Fleet Street over an epically long lunchtime session and if jaded memory serves the favoured configuration in those very early days was the over ambitious four groups of six with the top two in each progressing. It was the beer talking but in partial defence the Courage League of that era involved 12 domestic games, not the 22 plus play-offs they face these days. The season was less crowded.

A couple of years later the Heineken bigwigs had polished up their plans and while reluctantly appreciating that the RFU and the SRU were not yet on board they unveiled a very modest 12 team, four pool tournament, which frankly underwhelmed the media. Italy boasted two sides, indeed a Michael Lynagh-guided Treviso were quite fancied to reach the final and Farul Constanta were there for Romania. The remaining teams were either Irish or Welsh.

The competition spluttered along with all the pool games being played in midweek would you believe, sandwiched between big domestic fixtures. Except in Bordeaux and Toulouse, echoing empty terraces were a lasting memory of those matches, not unlike those quarter-finals last week in Dublin and Exeter which deserved full houses.

I covered Cardiff v Ulster one Wednesday night in that first season where the stated crowd of 3,600 erred by about 2,000 on the plus side and I was also one of the alleged 4,000 who rattled around Lansdowne Road for Leinster’s 23-22 win over Pontypridd.

The semi-finals were modest affairs and spectacles but finally the competition kicked in a little with a better than expected final between Cardiff and Toulouse in front of a 20,000 crowd at the Arms Park. From the sparsely populated Press box that still looked like an over-estimate but there was unquestionably a decent turnout and we were rewarded with a dramatic extra-time win by Toulouse.

The big explosion came the following season with the English and Scots clubs deciding they should jump onto the bandwagon just in case it proved to be a success while the BBC offered up wall-to-wall coverage.

More than anything though a mercurial, mysterious, sexy, not particularly well known French side – Brive – emerged to light up the tournament and provide that gallic whiff and x-factor that the organisers had hoped for. They eventually ran a star-studded Leicester side ragged in the final, again at the Arms Park. This time the crowd was given as 41,664 and it was all of that.

It was also the year the competition stumbled on the perfect format: five pools of four with the top three runners-up also qualifying for seeded quarter-finals. It  sounded incredibly awkward and ham-fisted but it has set up endless ebbs and flows in R5 and R6 with teams unexpectedly coming into the reckoning and rarely a dead rubber to speak of. It was a stroke of genius, intended or otherwise.

The following season it was Bath’s turn to win a memorable final in Bordeaux but the competition still hadn’t quite bedded down. Bath were denied the opportunity of defending that title by an English clubs’ boycott the following season as they belatedly fought to take control of a tournament they wanted to mould more to their liking.

The English were back for the new Millennium and that is when the competition started to hit its stride. The Munster story was growing and nearly 70,000 fans attended what proved to be a rather drab final against Saints at Twickenham. It didn’t matter. The Heineken Cup had arrived, it transcended any particular match, good or bad, good season or poor.

The power and money of the French Top 14 clubs has often been the narrative with howls of anguish from their competitors yet only three French clubs – Toulouse, Toulon and Brive – have ever won the Cup. Five English clubs have contributed to nine Cup wins while only Connacht in Ireland have not tasted ultimate success from over the Irish Sea. It has never quite been the French carve up that some obsessed with budgets and salaries would have us believe.

The Top 14 and Prem clubs did start throwing their weight around again  five or six years ago, agitated that they had to work so much harder to qualify than their Celtic cousins and the lone Italian sides. They had a strong point morally but were predictably heavy handed in their attempt to reassert control. Equally predictably it all settled down very quickly.

Next season we have a complicated Covid format for the Cup which will take some getting used to. Hopefully, it really is the one-off the organisers promise. They would be foolish in the extreme not to revert to the tried and tested asap which emerged from those early experimental days.