Posted on 1st September 2020 by admin in Features, My Life in Rugby 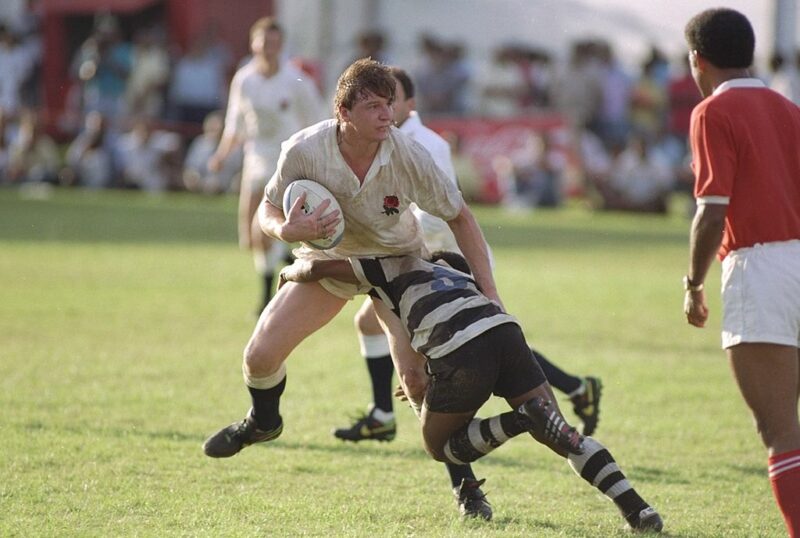 At Blaydon people put a lot of time into developing me as a player and it was thanks to the club that my career took off. Bobby was a little, aggressive scrum-half (aren’t they all?), and first XV player-coach. As far as he was concerned, I was a shower of sh*t: a skinny colt who couldn’t tackle.

When I got a late call-up for the firsts away to Stockton, I sat nervously at the front of the bus – for the first and only time in my playing career as that just wasn’t me – and all sorts was going through my mind. Bobby handled it really well; he came up to me and said, ‘all I want you to do is tackle the opposition fly-half within the first five minutes, and don’t worry about anything else after that’.

From having a scrambled brain, that message gave me some clarity and made me feel much better. It took a bit longer than five minutes to get my man, I’d already been side-stepped twice by him by then and made to look silly, but I managed to wipe him out, off the back of a lineout. The first person who picked me up was Bobby and he was grinning from ear to ear. He introduced me after the game to the fly-half, and it was Alan Old, the England and Yorkshire fly-half. What a nice fella.

In between my time at Blaydon, I had a fantastic time training with Roundhay. I’d gone to Leeds to do a ten-month computer programming course and lived in an area called Gledhow, to the north of the city. It was at the time the Yorkshire Ripper was doing his evil deeds. As a young, Geordie bloke on his own, I found myself under suspicion and was actually questioned by the police a couple of times. On one occasion, I was in the Post Office in the city centre and I turned around to find I was the only person in there. Someone must have heard my accent and they’d locked the doors and called the police!

The computer programmer course paid off and I got a job, not back in Newcastle, where I’d intended to return, but down in Sidcup. I didn’t know where Kent was, never mind Sidcup!

A mate of mine played there and he said to me, ‘whatever you do, don’t go to Blackheath’. So what did I do? I went to Blackheath, and I’m glad I did because I had six fantastic seasons there at a time when their fixture list was second to none.

I first turned up on Boxing Day in 1979 and watched them play the Army. It was a fantastic game. The back row battle was brilliant and I watched a guy called Stevie Taylor all afternoon smashing into people and getting smashed. I knew straight away that that was where I wanted to play my rugby.

I played many times with Tay and we’re still great mates.

In those days, you didn’t change rugby clubs unless you were changing jobs and moving cities. I remember our Welsh fly-half and best player, Dave Slater, joined London Welsh in mid-season and it took me a long time to get over it, it just wasn’t the done thing. That’s why I felt so bad for so long about leaving Blackheath for Quins – I felt like I’d let everybody down. I only felt better when I’d played as many seasons at Quins as I’d done at Blackheath.

The reason I went to Quins was for the challenge. At Blackheath, I’d lost my way even though the coaches John ‘Leggy’ Legge and Des Diamond had put so much good work into me. I’d split up with my girlfriend, I was probably drinking too much and I wasn’t playing that well, but Blackheath kept on picking me regardless of form. A big Jamaican mate of mine, Leon Pyke, sat me down and said, ‘you need to think long and hard about your rugby. What’s happening? Where are you going? Are you being challenged?’

A really good flanker called Kenny Moss was leaving Wasps to go to Quins. So I said to Leon, Wasps is obviously the place to go. He said, ‘no, Kenny Moss is going to Quins, that’s where the challenge is’, and he was right. Back then, you had to be invited down to Quins; I just turned up. I remember going to the ground and finding both the first and second team home changing room doors were shut. I went into the first team one which was full of players and coaches and I was greeted by saloon-bar, Wild West-type silence. I didn’t get thrown out, despite plonking myself on someone’s knee, and the player-coach, a really intelligent, thinking man’s hooker called Iestyn Thomas, allowed me to train against the firsts for a short spell in an opposed session before I went to join the rabble on the other pitch. I think I let them know what I was capable of in that 20 minutes.

I can’t mention Bobby Bartle and Iestyn Thomas without mentioning Dick Best. Dick was very different to Iestyn in the way he managed players. No-one was spared his punishment – other than the pretty boy centres like Jamie Salmon and Will Carling. He was great at bringing people down to size, too.

I remember a John Player Cup tie up at Gosforth. I had a couple of beers on the train up and a few more with some of my old Blaydon pals like the prop, Jacky Brooks, and he got wind of it. He rang up our reserve team No.8, at his home in Surrey or Dorset – one of those posh places – and said, ‘Skinner doesn’t know this, he isn’t playing tomorrow, so you need to get a train up to Newcastle’. At the team meeting they read the team out and my name wasn’t on it. All my family had come to Gosforth to watch me and I wasn’t even on the bench. It was so embarrassing to explain the reason why. When you are a senior member of the team you need to set an example and I didn’t do that. It was painful but a top lesson nonetheless – right up there with England’s defeat to Scotland in 1990, when I thought I was the bollocks but got them handed to me by the Scottish pack.

To go back to Murrayfield for the World Cup semi-final and get the win, after what had happened the year before, was massive. People say it was a dour game, but those people weren’t playing in the match. Neither back rows gave an inch – it was brutal. When they got the ball they were immediately smashed and when we got the ball, we were too.

I’d been picked in the back row ahead of the legend that is Dean Richards, initially for the quarter-final game against the French – a massive call from Geoff Cooke and Roger Uttley. Dean was brilliant about that, he didn’t mope, he just wanted England to win. I remember him saying to me just make sure the first man that comes around the corner is your man, and that’s what I did with the Cecillon tackle that everyone remembers.

They were camped on our line, and after four or five scrums which had gradually moved play in field, the blindside had grown to about 30-40 yards. While Rory (Underwood) was capable of stopping his man, one-on-one, there would have been no way of us stopping a try had the scrum-half gone himself or had Cecillon broken and passed inside. Instead, he decided to go it alone and I hit him and was joined in the tackle by Teaguey (Mike Teague), which is what made it look even more spectacular. We got the scrum and cleared our lines, and everyone patted me on the backside. It was great to be part of that moment.

For the final against Australia Geoff Cooke’s passing comment in his big speech was, ‘this is a World Cup final, go out and enjoy yourself’. I stood in the tunnel and thought that was a strange thing to say. ‘Enjoy yourself?’ Enjoyment was not on my mind, all that was on my mind was winning. I gave everything that day, I couldn’t give another ounce of sweat, and that was of some consolation as I sat dejected on the pitch 20 minutes or so after the final whistle. We could also reflect on winning the Grand Slam earlier in the year, which we backed up in ’92. Being part of a double Grand Slam-winning side was special.

By the time I went back to finish my career at Blackheath, niggling injuries to my neck and back were catching up with me. My great back row mate, Danny Vaughan, had taken over as coach and let it be known to me I’d have to fight for my place. It was when I couldn’t get out of the seconds that I knew my race was run. I have no regrets, I got the most out of the sport I love, and made some great friends.