Posted on 7th August 2020 by admin in Features 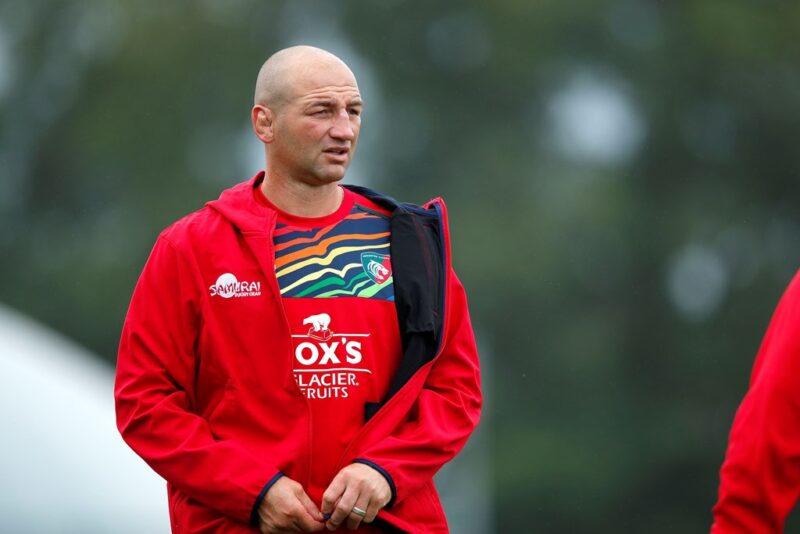 STEVE Borthwick is more about hard graft than glitter, and that should make him the perfect fit to tackle the basement-to-roof rebuild required at Leicester, who restart the season in eleventh place in the Premiership with a trip to league leaders Exeter in a fortnight.

Where his recent mentor, Eddie Jones, combines showmanship with sharp one-liners when he meets the media, Borthwick is his antithesis, with a reputation for being as serious as a tax inspector, and just as meticulous.

That is why it was no revelation when his inaugural Press conference as Tigers coach was underpinned by his constant references to working hard, setting high standards, and improving.

At a corporate symposium it would have had the hollow ring of a PR puff-line, but with Borthwick it is different. For a start, having thrived at the sharp end of the international game for the last eight years, he has the most illustrious track-record of any coach in the Premiership by a distance – including Exeter’s Rob Baxter and Saracens Mark McCall.

What is more remarkable is the volume and quality of the 40-year-old Borthwick’s achievements as an assistant coach alongside Jones, first for Japan, and then England, since he retired from playing in 2012.

Borthwick had a big hand in one of the biggest upsets in Test history when Japan beat South Africa in Brighton during the 2015 World Cup. As he continued to share the international bunker with Jones throughout their subsequent journey with England the landmarks accumulated, as did his reputation as a selfless, workaholic forwards coach.

He played his part in the 2016 Grand Slam and 18-match unbeaten run, and went through the doldrums of 2018 before launching into the rocket-fuelled 2019 World Cup campaign which saw England torch Australia and New Zealand, before crashing and burning against South Africa in the final.

He was also picked as forwards coach for the 2017 Lions tour, assisting Warren Gatland as they became the second Lions side to come back from New Zealand in credit, after drawing the series.

Borthwick’s laurels as a player underline the inexhaustible work ethic and ambition which has since taken him to the top of the coaching tree so rapidly. Despite not being the biggest lock, or being blessed with fast-twitch athleticism, he became a lineout obsessive who battled his way to the top of the game, captaining Bath, Saracens and England – winning 57 caps, 21 as captain (2001-2010).

At the same time he was a trail-blazer, because as a veteran lock he was also cutting his teeth as an on-field forwards coach and analyst, giving both Bath and Saracens the best of both worlds.

His move to Leicester reflects the guts and determination of his playing days, because he has passed-up the opportunity to have another crack at the World Cup with England in 2023 to join a club in the doldrums, and carve his own path as a head coach and head selector.

It is a calculated risk, because failure at Leicester would be the first blot on Borthwick’s coaching career and could stall his chances of succeeding Jones as England coach – whereas success at Welford Road would rubber stamp his credentials.

The Cumbrian-born, Lancashire-raised Borthwick says he has gone in with his eyes open. “Everybody will be pretty clear on where this team is and how much work there is to do, and I’m the same. I’m someone who researches and plans, and I’ve spoken to quite a few people so that I understand the full picture here.”

When he is asked if the task ahead at Tigers is easier because their trophy-winning days are in the rear-view mirror, and that the only way is up, Borthwick says he feels no pressure, and has his compass points marked out.

He says: “I want to be very clear: Every day I am working towards winning… (but) everybody I have spoken to is realistic of where Leicester Tigers are right now and how much we have got to do to get back to where we want to be.

“The third thing I’d say is nobody has higher expectations of me than I have of myself.”

That last statement explains why, when Borthwick decided to hold his first meeting with the Leicester squad in the stands at Welford Road – which he describes as “a special place” – they knew they were looking at the living, breathing, broken-nosed embodiment of the hard-working credo he asked them to embrace.

Calum Green, who was raised in the Leicester Academy but spent five seasons at Newcastle establishing himself as one of the best lineout locks in the Premiership before returning to Welford Road this season, says that is exactly what the Tigers needed after a fraught lockdown period, during which the club lost 23 players – including Manu Tuilagi – and imported 17.

Green, who featured in one of the club’s great victories in his first stint at the club when a second- string Leicester side beat the Springboks 22-17 in 2009, says that Borthwick has brought clarity from that first address.

“He said what he wanted from us, and what he and the coaching team are going to bring to Leicester. Before Steve came I spoke to a lot of boys who have worked with him and heard that he’s very detailed, but at the same time very simple and clear with his messages.

“He doesn’t leave the players wondering what he wants. We’ve got absolute clarity now – and that’s something we’ve probably lacked a bit in the past. We know what is expected of us in every situation, and, as players, we know what we will be held accountable for.

“Everything is set out. There’s nothing where you think, ‘I’m not quite sure about this’. Steve is very direct. He knows the game inside out, so we are much clearer in how we play, how we defend.”

Green, 30, says that Borthwick’s message to this Tigers squad about the need to create their own culture was equally precise.

“We spoke about how Leicester have won titles in the past, but how that doesn’t count for anything any more. We have to start afresh, and Exeter is going to be pretty tough – but, for me it is the ideal start, because we’ll see what we are made of.

“It’s all very well me sitting here saying these words, but it is what happens on the pitch. That is how we are going to be judged. If we run out and we are not there, then I’m sure you will slate us. But if we turn up, and give a good account of ourselves, you can see what we are all working towards.”

What Borthwick makes clear, and Green confirms, is that Leicester have got a hands-on coach in charge rather than an overseer.

Borthwick says: “I love coaching – and, as you’d expect, I have learned a huge amount from Eddie Jones. He is a brilliant on-field coach, not just in the energy he brings, but in the way in a (single) session coached by Eddie the players improve. If you talk about a model of coaching, and how to improve players, Eddie is incredible in that regard – and that is not bad to follow and learn from.”

Borthwick says that the differences between day-to-day coaching at club level and the long lulls you get in international coaching are not as hard to handle as many believe.

“The biggest thing in this time frame is that there are a lot of similarities. In the World Cup campaign we had the opportunity to work with the players each day, every day – to work together, help them to improve, and find a development plan. That’s the one time as England coaches that you have the time to see development and growth, and that is really enjoyable as a coach. It’s a similar situation here at Tigers, and I’m enjoying that, and I think the players are too.”

However, Green offers a different perspective on the new head coach that will be music to the ears of hard-bitten Leicester supporters reared on tales of training ground stoush.

“Steve’s talked about his standards, and in training if someone’s lift or throw is not quite there, he’s letting boys know. It’s not a case of letting things go – sometimes in the past that would just get papered over – but he’s letting the boys know that the only way we are going to get better is being hard ourselves, and hard on each other.

“For myself as a forward, and for Leicester, a lot of the success in the past was built on a dominant pack – and for the previous season or two we haven’t had that at all. If you are going to be a top four team in the Premiership you need to have a pack whose set-piece is up there, and who are nasty at the breakdown and when tackling.”

Green also talks about the positive charge in the atmosphere at Leicester since Borthwick arrived at the club a month ago.

“This season I came back to the club I supported as a youngster, and having been in the academy I wanted to make a good impact – and I don’t necessarily think I did that. At times earlier this season it was a drag. It’s tough when you are losing games. Physically you’re feeling battered and bruised, and mentally it’s tough – whereas now the place feels a lot fresher and there’s a lot of positive energy around.

“I’m not saying we’re going to come back and win every single game, but we are in a much better place mentally than we were before lockdown.”

Borthwick has acquired the habit of hitting the right buttons when communicating with players according to Green.

“It’s been very good. Even in lockdown he was sending us little messages and videos, getting us to analyse stuff. He goes into detail, but also gets us to think about different scenarios – things like a man in the bin, or if a hooker goes off – and how we deal with those situations.”

Green says the same is true at the lineout, the area of operations in which they share a specialist interest.

“He’s talking to us every day, and telling the lineout leaders little details, but it’s very specific. He allows us to lead it too – leaving it up to us to communicate with the boys. It’s a good balance. You can’t have a coach talking all the time, or players talking all the time. You’ve got to work together, and that is working well at the moment. He can help me a hell of a lot with my calling, and I’m looking forward to that. Steve will have a massive influence as someone who has been there and done it.”

Now Borthwick has backed himself to go out there and do it again, this time as the main man at Leicester, a club with a great past but an uncertain future, signalled by the fact that he is their fourth coach in four years.

Steve Borthwick deserves the plaudits for a bold move, but if he lifts the Tigers up to the heights again he knows that the pay-off will be promotion to join Jones in the ranks of the super-coaches.