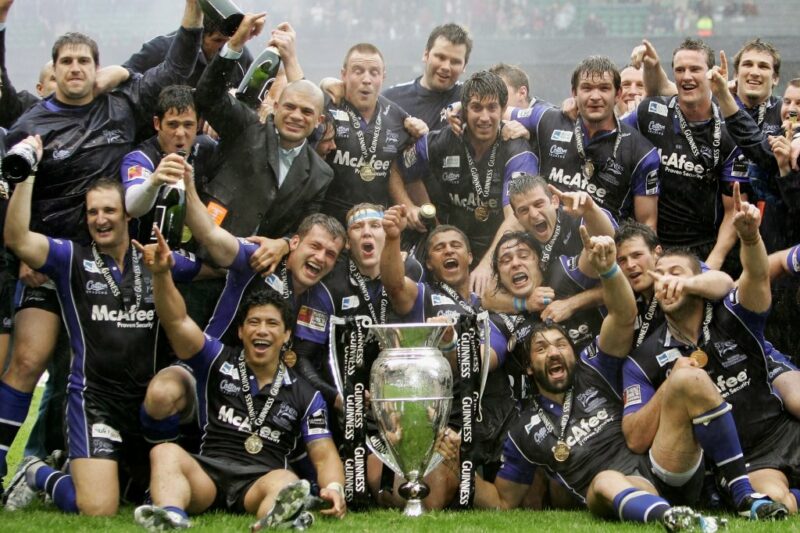 MANU Tuilagi’s signing by Sale Sharks last week was all about boom, contrasting starkly with the picture of a Premiership which, since lockdown, has been on the verge of going bust.

If anyone had doubts about the staying power of the Sale revival, signalled by a surge to second place in the pre-pandemic Premiership table, then the arrival of England’s midfield blockbuster, Tuilagi, has banished them.

Tuilagi is box office, and when his dispute with Leicester over the renewal of an annual contract worth £500,000 became intractable – with the Tigers wanting him to take a 25 per cent pay cut, but unable to agree that it would be paid back at a later date – Sale swooped.

No sooner had Leicester terminated Tuilagi’s 12-year man-and-boy relationship with the club, than Sale offered him a deal believed to be worth £300,000. This not only saved his England career – which would have stalled if he had gone overseas – but also gave the 29-year-old a new start in a star-studded Sharks squad which includes his red rose teammates Tom Curry and Mark Wilson, and two Springbok World Cup winners, scrum-half Faf de Klerk and lock Lood de Jager.

They are part of an nine-man infusion of South African blood, which, mixed with a club that has managed also to maintain some of its Northern roots, appears to have produced a potent blend.

The optimism at the south Manchester club, which has finished no higher than sixth in the league since 2009, is reflected in the views of two of Sale’s favourite sons, Mark Cueto and Charlie Hodgson.

Former England wing Cueto, who is the Premiership’s second highest all-time try scorer (92), and Hodgson, the former England fly-half who is still the Premiership’s all-time record points scorer (2,625), feel that this Sharks squad are poised to match their feat of winning the league title, which the club did for the first time in 2006.

Sale hammered Leicester 45-20 in the final, with a Hodgson cross-kick being grounded by Cueto for the first of their four tries, and the inspired fly-half finishing with a 23-point haul.

One of the enduring images from that afternoon at Twickenham was seeing 20,000 ecstatic Sale fans saluting their team, amid a sea of optimism that their then owner, Brian Kennedy, had launched a dynasty in which the northerners would supplant Leicester as the dominant force in English club rugby.

However, the dream failed to materialise when their influential French drivers, coach Philippe Saint Andre and No.8 Sebastien ‘The Caveman’ Chabal, returned to France in 2009. Sale were unable to scale the heights again, and when Hodgson left to join Saracens in 2011 the dream had fizzled out…until now.

Cueto, who retired at 35 after making 303 appearances for the Sharks, says that the club are on a roll on and off the field. He points to the robust business model put in place by new co-owners Simon Orange and Ged Mason, who bought the Sharks off Kennedy in 2016, as the foundation stone.

Mason is the chief executive of the Morson Group, a company with an £800m turnover involved in supporting the aerospace, rail and nuclear sectors, while Orange runs the business acquisitions company CorpAcq, which he has grown significantly in the last 20 years.

They have assembled an impressive board of directors, which includes two of Sale’s greatest players, Fran Cotton and Steve Smith, both former England captains with a deep reservoir of rugby and business acumen.

Two years ago, Orange’s CorpAcq bought a majority stake in Cotton Traders, the successful clothing retailer co-founded by Smith and Cotton in 1987. Cotton is now chairman of the Sharks board, while Smith is chairman of Sale FC, the old amateur club from which Sale Sharks grew, but which has climbed up the English league structure and is currently in National League One.

They are joined on the board by Sharks director of rugby, Steve Diamond, as well as a number of mainly Manchester-based captains of industry, chief executive John Dorsett, Mike Ingall, Mike Blood and Dermot Power.

Cueto explains why there is such a feelgood factor at the club: “So much has happened since Simon and Ged took it over. They are committed to getting the club back to the top of the Premiership, as it was in the 2005-2007 era, and to keep growing it.

“That means they want to keep the young local guys they are bringing through, and not just go to the market to buy in talent. Steve Diamond and the owners have said they want a 75 per cent homegrown side before long.

“They have invested on the field, as well as off it, and it’s starting to pay dividends now – it’s just exciting times. There is nowhere better to be. We have four players who were 2019 World Cup finalists in the Sharks squad, which is incredible, but we’ve also still got a lot of Northern lads, like Sam James, Luke James, Ross Harrison and Josh Beaumont, and there’s a lot of similarities now with the 2006 side that won the Premiership title.”

Cueto, commercial director at Sharks, continues: “We are second in the league table, and we have booked a place already in the final of the Premiership Cup against Harlequins – who we also play at the Stoop in our first re-start fixture. Before this week the highest-rated Sale Sharks social media post was of Faf de Klerk in budgie smugglers just after the World Cup final, which came in at 10,000 views. When we put out a football-style picture of Manu signing for us this week it got 10,000 views in just three hours – which shows the publicity power of high profile England players.”

With signings like Tuilagi, Cueto says there is every chance of increasing the profile of the Sharks, despite Manchester’s reputation as a football-mad city. “There are 100 amateur rugby clubs in this area, with a combined membership of 45,000, so hopefully we can continue to grow our support base.”

Cueto waxes lyrical about the impetus he believes Tuilagi will bring: “I played alongside Manu in the England team in 2011, and he’s not even 30 yet. Even with long periods out with injury, he has played in two World Cups, and for the Lions, and has 43 England caps, so to add him to the Sharks squad is fantastic. I met him again on Monday, and he looks good, and he trained with the boys on Tuesday, and has been up here looking at houses with his brother, Freddie.

“I don’t think there’s anyone like him. It’s Manu’s dynamic power that makes him so much of a threat, because he can break through the toughest defence. Rohan Janse van Rensburg is also an unbelievable ball-carrier at 12, but with him it’s more strength than power. I saw a tweet from Freddie Burns the other day saying midfields across the Premiership will be closing their eyes at the sight of those two together!

“It will be a dream for wingers like Denny Solomona and Marland Yarde to play in a backline outside Manu. The way he holds defenders means that whether he receives the ball, or is used on a decoy run, there will be plenty of opportunities for those out wide. For instance, Manu will attract three defenders long enough as a decoy for the ball to be played behind him, giving the wingers great attacking positions.

“There are still a couple of old Sale boys like myself employed by the club, and I reckon that with the centres we have here now I could still strap on my boots and score a try on one leg. With the Curry boys, Tom and Ben, in the back row, and Lood de Jager at lock, we should have a very competitive pack.”

Cueto says that the strength-in-depth Sale have assembled makes them title contenders this season, and going forward: “The pressure is on, but it’s good pressure. A lot of these lads here now won’t remember when we won the title, and how competitive we were, because they have only seen us as a mid to lower table side over the last ten years, which frustrates the hell out of me.

“We’ve got a side that could win the Premiership, but the break has been that long that it will be like a start of season again in terms of finding your timing on plays. It will be almost like a cup competition. The first two games are crucial, and will probably decide the two home play-off places.”

Hodgson is also full of enthusiasm, but takes a more cautious line than he did as a mercurial fly-half. “Whether this season is too soon for Sale to win the Premiership, I don’t know – but if it’s not this year, I’ve no doubt they’re going to be challenging for titles over the next couple of seasons.

“To have Manu in any team is a great signing. The question mark is his fitness, and whether he can stay injury free. He is a brilliant addition to what is already a fantastic team at Sale, because, before he arrived, they were already challenging Exeter.”

It is also clear that the tactician in Hodgson has never stopped ticking, and as he provides answers he also raises questions.

“A gain-line carrier like Manu makes your life a hell of a lot easier as a fly-half.

“With centres like Tuilagi, Janse van Rensburg, Sam Hill, and Sam and Luke James –who can both play full-back – the make up of the Sale backline will be very interesting. Attack coach Paul Deacon will have a great chance to work out a whole range of options based on a midfield of that strength.”

Hodgson adds: “When you look at Sale’s try-scoring and points-scoring record this season, you would have to say that they have a good mix at fly-half with either Robert Du Preez or AJ McGinty. Are they the most expansive fly-halves? No, but they manage the team very well, and they are two guys who have strengths of their own, and play to those strengths.”

Hodgson also adds a knowledgeable insight into the Anglo-South African mix in the Sale squad based on his experience of a similar fusion during his time at Saracens.

“What Sale have in abundance is a return of the northern grit they were known for. They have a really hard, uncompromising edge about them again, and their South African signings have played their part. The Springboks I knew at Saracens after I joined from Sale were not only brilliant squad people, they were hard, physical rugby players – which suits the northern mentality.”

Cueto agrees, and when it comes to hard, physical rugby players both he and Hodgson know that no one fits the mould better than Tuilagi. It is what prompts Cueto to sign off with this thought about Sale’s next mission. “If we get a result at Quins, then we’ll be motoring.”

It goes without saying that with Manu Tuilagi in harness they will also take some stopping.