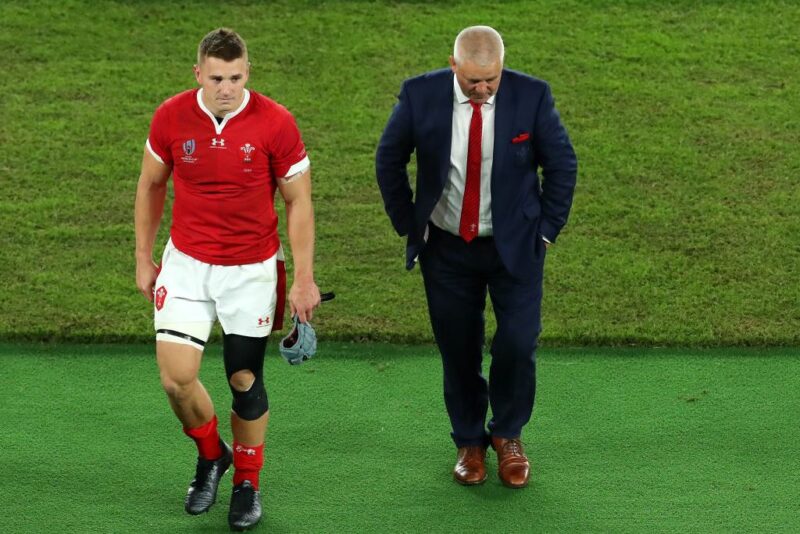 JONATHAN Davies will be 33 by the time the Lions set foot in South Africa next summer, but the influence the Welsh outside-centre had on the 2013 tour of Australia and the 2017 tour of New Zealand makes him a strong candidate to be selected for his third tour.

There is little doubt that Davies is one of Warren Gatland’s favourite sons, having played such a key role in the backline when he was in charge of Wales, as well as in coaching the Lions on their last two outstanding tours.

It could be argued that Davies already has one foot in the Lions hall of fame, having been in the starting line-up for all three Tests in the 2013 victory over the Wallabies, and claimed the 13 Test jersey again in the drawn series against the All Blacks in 2017.

However, the Scarlets star has been sidelined with a knee injury since his searing break set up a Josh Adams hat-trick try against Fiji in the 2019 World Cup. Although he returned to play in the semi-final against South Africa and the third-place play-off against New Zealand with heavy strapping on the injured joint, on his return home he had knee surgery.

This kept Davies out of the 2020 Six Nations, although with his six-month rehabilitation period well advanced he could be back in action if/when the tournament finale is played in the autumn.

The main obstacle in the way of the player known to team-mates as ‘Fox’ is first getting back to match fitness, and then hitting the form that has made him one of the most formidable midfield backs in the international game.

This will be closely monitored by Gatland, whose faith in Davies in 2013 and 2017 was richly rewarded. It also sparked a major controversy on the Australia tour, when the coach selected him ahead of his high-profile Irish counterpart Brian O’Driscoll in the decisive third Test against the Wallabies.

The dropping of the former Lions captain generated a huge amount of controversy, with Gatland pilloried in the Irish media – but a record 41-16 win provided convincing evidence that the coach had got his selection right, rather than bow to pressure to give the veteran O’Driscoll a last run.

At 6ft 1ins and 16st 3lbs/103kg, Davies is powerful and has a surge of acceleration which allows him to shrug off tacklers, as well as highly effective passing and kicking skills. The Welshman’s other prized asset is his experience and leadership in defence, where his physical presence and nous is invaluable.

The 13 channel is a favourite avenue for attacking teams, and Davies’ ability to marshal the defensive line and judge when to blitz or to remain aligned will be crucial against South Africa.

As mentioned in last week’s edition, with both Manu Tuilagi and Robbie Henshaw versatile enough to play at 12 or 13, Gatland has alternatives should Davies not return as strongly as hoped.

However, given his illustrious track record, and the fact that the knee injury has forced Davies to miss the best part of a season of wear-and tear, there’s a good chance he will be raring to go.

The same will be true of Henry Slade (6ft 3ins, 15st 1lb/96kg) who will be pushing hard to claim a Lions place for the first time. Slade was bouncing around the Exeter Chiefs backline in 2017, and missed out on the tour, but, at 27, the England midfielder has shown over the last couple of seasons that his sumptuous footballing skills and athleticism make him a dangerous second playmaker at 13. Slade also brings the bonus of being able to provide cover at 10, 12 and 15.

Garry Ringrose (6ft 1ins, 14st 9lbs/94kg) is another pedigree outside-centre, although the 25-year-old has some ground to make up after Ireland’s disappointing World Cup showing. Ringrose’s Six Nations campaign was curtailed by a hand injury, but next year will provide the accomplished Leinster 13 with the chance to make his case.

Jonathan Joseph, 29, has the credentials already, having played for the midweek Lions in 2017 – and the rapid Bath man (6ft, 14st 2lb/90 kg) could be in the running again. This is not least because of the footwork and finishing skills that have seen him score 17 tries in a 50-cap England career.

Joseph and Ringrose can also cover wing, as can Keith Earls, the veteran Munster and Ireland strike runner who is still going strong at 32, having made his first Lions squad – also to South Africa – eleven years ago.

The biggest enigma among the contenders is Scotland’s Huw Jones, who was brilliant when scoring two tries in the 2018 Six Nations win over England, but whose inconsistency led to him being left out of Gregor Townsend’s 2019 World Cup squad.

At his best, Jones (6ft 1ins, 16st/102kg), is a handful, with the pace, power, and finisher’s instinct which earned the UK-born and bred midfielder a place in the Western Province and Stormers sides from 2014-2017.

However, he was supplanted by Chris Harris after starting the 2020 Six Nations – and, unless he finds sustained form, Gatland is unlikely to take a gamble on Jones, 26, despite the flair he showed on his last stint in South African conditions.