Posted on 8th June 2020 by admin in Features, My Life in Rugby 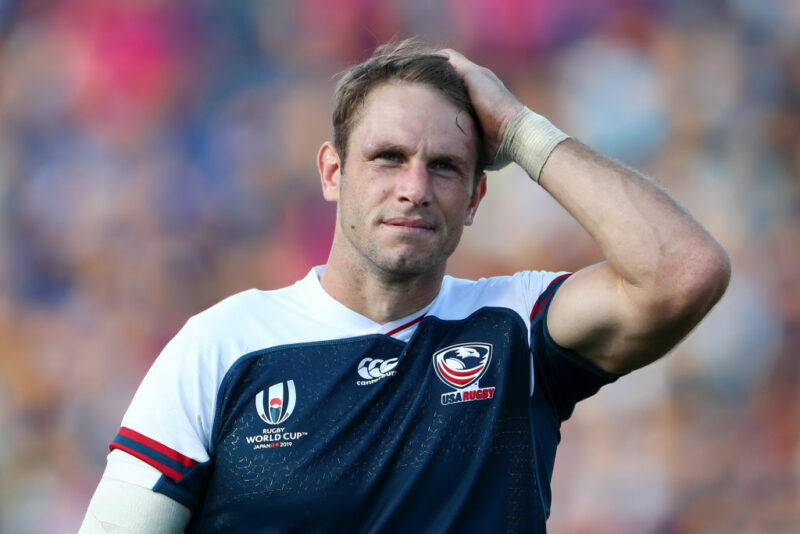 My dad and brother played American Football, but my mom kept me away, so I like to joke with her that I went on to make tackles for a living anyway – in rugby.

Initially she was less than thrilled when rugby found me as a freshman at university, but by the end of it, she became my biggest fan.

Finding the game late, I knew I needed to accelerate my learning. So I broke it down into segments, relating the elements of rugby to the sports I played growing up. One skill that translated particularly well was the high ball. I like to think that I became an expert. Although, I spent a lot of time training it, the foundation of my ability was likely due to my basketball background and grabbing rebounds.

As soon as I knew that rugby was what I wanted to do, I became a student of the sport, watching old VHS tapes of past World Cups and Six Nations to trawling YouTube. My desire for knowledge was also grounded in my competitive mindset and thinking, ‘shoot, that kid in New Zealand has been playing the game since he could walk’, and knowing that if I didn’t work as hard as I possibly could I wouldn’t be able to catch up.

As an athlete, preparation is everything. But sometimes the timing of when your moment finds you boils down to chance. I definitely feel some fortunate things happened to me, but I was prepared to meet them when they came.

For example, my break with the Eagles came in 2011, on the eve of the World Cup. Because Chris Wyles’ ankle still wasn’t quite right, I assumed the starting full-back spot, making my debut against Russia in Worcester and wearing 15 through the warm-up matches.

Suddenly my opportunity had arrived. I had finally earned the right to wear my country’s jersey. Early on the responsibility of the jersey was built into me through a long-held Eagles quote, “The honour is not in the selection, but in the performance.”

I would go on to play pretty well that summer, earning my place among the 30 selected for the Word Cup squad. Our first match against Ireland was an emotional day for all of us, as it was the ten-year anniversary of 9/11. It was one of those games where I was happy to be at full-back. Standing in the backfield, it was like watching multiple car-crashes at an intersection such was the ferocity of the collisions at the breakdown and gain-line. As ever, we were proud to wear the US flag on our shoulder that day.

Rocky IV posters had been put up in many New Plymouth shops to advertise our next game against Russia. I didn’t know it then, but it would be the only game I’d win at the World Cup in my 11 appearances  – a joint US record. As a competitor, it’s not a record that sits well with me.

I’d planned to go overseas after the tournament, but the right fit didn’t come along so I returned to the US to compete in the Pan-American games, winning a bronze medal. A ruptured Achilles ruled me out of 2012 but the next year I got a call from an agent saying Leicester were after a medical joker.

Scott Hamilton was out long-term, and Geordan Murphy had just retired, leaving them short in the back three. I had a successful two-week trial, which led to another two weeks. After that, myself and Cockers (Richard Cockerill) sat down and sorted out a six-month contract.

It was exactly where I wanted to be – at a historic club who’d made the last nine Premiership finals and were reigning champions. It was a whirlwind of a year. From my debut at Welford Road against Newcastle to the Heineken Cup quarter-final against Clermont, I loved my time there.

Onto the 2015 World Cup. With the team we had, we expected to do better than we did. As vice-captain, I felt more pressure and responsibility than I did in 2011. Being in England, we were under the microscope, especially as a Premiership player. I wasn’t a kid anymore.

Unfortunately, I suffered two concussions during the tournament, ruling me out of our final match against Japan which ended a disappointing tournament. As ever, I was proud to represent the United States. We weren’t able to work through a few internal team issues, but you don’t get to write that down on the scoresheet as an excuse. You have to be able to deliver regardless of the circumstances.

Sport isn’t a fairytale and can’t always be sunshine and roses. It doesn’t always happen like you plan and you are certainly going to have to adapt. But at the end of the day, you have to own your performance.

I’d hoped to stay on at Leicester after the World Cup, but the Cardiff Blues made me an offer that I felt could challenge me in a different way. Billy Millard, former US backs coach, had gotten the job there as general manager and wanted me to be part of the rebuild. The history and the heritage of the region appealed to me as well, offering the challenge of a different country in a different league.

I loved my time in Cardiff and Wales. The people of Cardiff and my teammates treated me as one of their own with USA chants at “Cardiff Arms Park”. Who would have thought it! But a moment that stands out above all is winning the European Challenge Cup in an epic final against Gloucester in Bilbao.

As is the business, many of the players were moving on, as was coach Danny Wilson, so that season had a ‘last dance’ feel to it. I scored a try in the 75th minute to bring us to within a point. I didn’t do Gareth (Anscombe) any favours with were I put the ball down, and he missed the conversion. However, a few minutes later he slotted a penalty to give us the lead and we held on. It was unbelievable.

Back with the US, I had become team captain after the 2015 RWC. In the next World Cup cycle we were building nicely, winning back-to-back ARC titles, climbing to 12 in the world rankings, and beating Scotland – our “first tier” one scalp since 1924.

We believed we were finding our stride. As captain, I was confident we could challenge anyone at the 2019 RWC in what was admittedly a very difficult pool. But in the tournament, key moments went the wrong way for us, and the World Cup is a brutal arena. I loved the World Cup in Japan; it was an incredible tournament and experience. It was the honour of my life to captain my country and I was proud of the team. But I will always feel personally responsible for the results.

That World Cup took a lot out of me physically and mentally. By the time we returned to States, my wife was seven months pregnant.

I had offers to go overseas again but we decided against it. Every day I was thinking through my options but eventually I came to the realisation that I’d done everything I’d wanted to do in the game and was grateful for the run I had. So I decided to retire.

I’m now in transition, changing diapers and supporting my wife, a role I am enjoying. I’m exploring opportunities and am looking forward to what’s next.