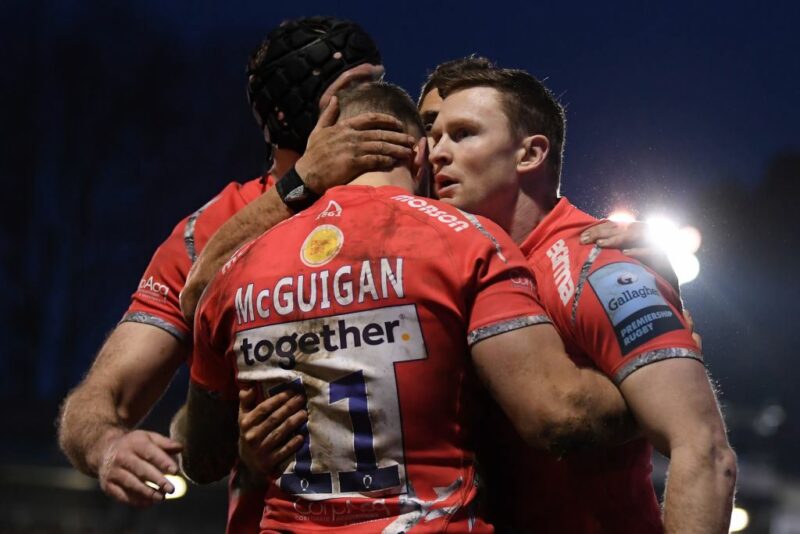 WITH the blood from the Premiership lynching of Saracens still on the tiles, the rest of the clubs in England’s top tier, who insisted on brutal punitive action which saw the champions fined over £5m, docked a mountain of points, and relegated, are treading very warily around their £7m salary cap.

This was highlighted last week when Steve Diamond, the Sale Sharks director of rugby who was heavily critical of Saracens, emphasised that Chris Ashton’s decision to leave the club for Harlequins was not due to financial reasons.

Diamond said that Ashton’s decision to leave Sale in mid-season is down to differences of opinion over playing matters. He did not elaborate too much about the disagreement, other than it being about how he and his coaching staff want to play the game, and the 44-cap former England winger seeing it differently.

Diamond said: “He wants to do it one-way, I want to do it another, and that’s it, so end of story.”

There was no further illumination on whether it was Diamond’s tactical approach that Ashton disliked, or whether he had taken umbrage at being rotated with Sale’s other wings Marland Yarde, Denny Solomona and Byron McGuigan.

We should take Diamond at his word, but it will not lessen the heightened scrutiny of the financial management of Premiership clubs in the wake of the Saracens debacle.

Ashton, who is third in the Premiership’s all-time top try scorer list, with 86, and has Mark Cueto (90) and log leader Tom Varndell (92) in his sights, will almost certainly have been among the top earners at Sale.

It is fair to say that Ashton also has something of a ‘have boots will travel’ reputation, having joined Northampton from Rugby League side Wigan in 2007, and since then moved to Saracens, Toulon and Sale before his latest transition to the Stoop.

However, Ashton is not the only recent departure from Sale, who also lost Cameron Redpath, their highly-rated England U20 centre, to Bath last month. Bath are said to have signed Redpath on a three-year contract, and are thought to have paid a six-figure transfer fee to boost a squad brimful with international talent.

The centre, who had been called up to train with the England senior side by Eddie Jones – and was picked in the England tour squad to South Africa in 2018, before being forced to withdraw through injury – had struggled for match-play at Sale this season.

Diamond made it clear that he wanted to keep Redpath at the AJ Bell, but conceded, “that after a number of meetings it became clear his desire was to leave the club”.

There is nothing to suggest that there is any overriding financial component in either Ashton’s departure from Sale, or Redpath’s, but the speed and volume of transfers spinning off the Sale roundabout over the last year cannot have gone unnoticed by the Premiership’s salary-cap watchdog.

There is no escaping that the club’s wage bill must have increased considerably, with top international stars like England’s Tom Curry and South Africa’s World Cup winning scrum-half, Faf de Klerk on their books.

Add to that Mark Wilson, another current England backrower, and a number of former England internationals like Yarde, Solomona, and hooker Rob Webber, as well as former All Black lock Bryn Evans, new Wales squad tight-head WillGriff John, Scotland wing McGuigan, and USA fly-half AJ MacGinty, and it is clear that Sale are stacked with high-end players.

Diamond claims that after years of spending “50 percent of what everybody else has spent” he now has the resources and finance to compete properly, and with Sale sat at the top of the Premiership table after Friday night’s 39-0 trouncing of London Irish, there is evidence it is no idle boast.

No-one is suggesting that Sale, who have 40 players listed in their European Cup squad, have achieved this by breaking the salary cap – but it is not hard to imagine that they, like most of their Premiership rivals – must be close to the £7m threshold.

It is interesting that Simon Orange, the Sale Sharks co-owner, gave a frank assessment of the salary cap soon after the initial disciplinary tribunal’s ruling on the Saracens case earlier this season.

Orange said in an interview in The i in November that he was unsure how many Premiership clubs were playing by the rules. “I have got 34 players and I’m struggling, and others have 48 quality players, and aren’t, so I suspect we are not all the way there yet.”

Orange also stated that it is relatively easy to get round the cap: “I am sure they (Premiership Rugby) have an investigative team, but if they said to me we want to check CorpArq’s books, I’ve got nothing to hide, but I’d still tell them, ‘no’.”

He added: “The truth of the matter is, if you wanted to do it, it’s easy to do. I am involved in 30 different companies, and if any of those companies decided to pay the players or employ their wives… I am not saying nobody could find out, but the audit wouldn’t find out.”

However, as Saracens discovered to their cost, the more the successful you are the greater the scrutiny you are under – and given the precedent that has been set, if the Premiership salary cap auditing process is to be seen as fit for purpose, every Premiership club should have no problem agreeing to a mid-season audit.

Sale say they have nothing to hide, and nor should any of the other ten Premiership clubs, so why not get it all rubber-stamped so we know everyone is starting with a clean slate?