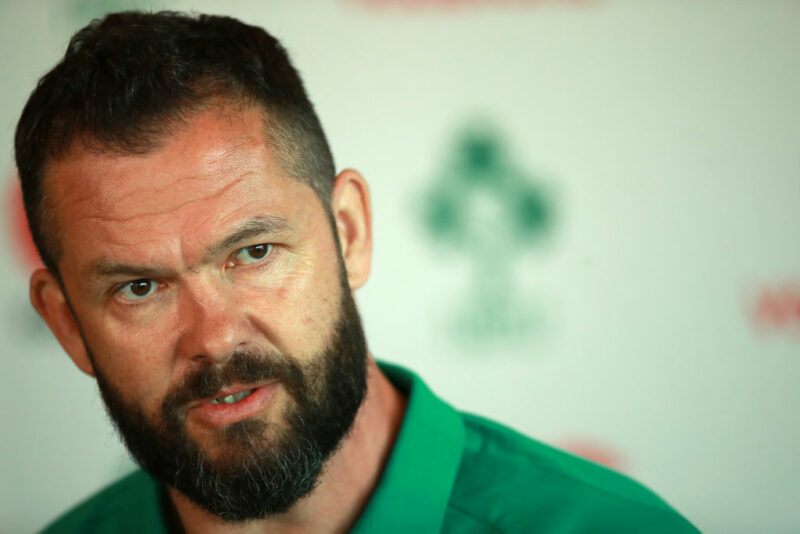 You will hear much talk over the coming weeks about whether Andy Farrell is made of the right stuff to be the head coach of Ireland or whether, in fact, he is one of nature’s number twos, a favourite sporting cliché.

And not without justification, the psychology and dynamics of making that final step up from highly rated specialist coach and assistant to head coach are fascinating.

Farrell achieved everything as a Rugby League player and has an extensive coaching CV in Union that includes three years as an assistant at Saracens, nearly four seasons helping Stuart Lancaster with England, a spell with Munster as an advisor and the best part of four seasons as Ireland defence coach under Joe Schmidt. He also served as defence coach under Warren Gatland with the 2013 and 2017 Lions. Farrell is manifestly a phenomenal man to have in your coaching squad.

But he is utterly untested as a head coach, the boss,  numero uno, the gaffer.  The lonely individual who ultimately makes the big calls; the weary battered coach who has to explain away defeat and his flawed selections to the media;  the man who has to tell a star player face to face he has been dropped.

There is every reason to think Farrell is made of the right stuff but we just don’t know.  The job of head coach is so different to the apprenticeship that most head coaches serve that sometimes it still requires a massive leap of faith.

Clive Woodward says: “If I was still coaching I would move heaven and earth to get the likes of Andy Farrell and Shaun Edwards involved coaching my sides, but being an assistant doesn’t necessarily prepare you to be head coach which takes in all sorts of managerial roles.

“You need to fight your corner with the union and clubs, interact constantly with the media, be a shrewd selector. You need to gauge the mood of your squad, be aware of all the minutiae yet at the same time be aware of the bigger picture. You need to be a good sleeper, untroubled by stress and decisions, and possess the hide of a rhinoceros when the flak is flying. If only it was just about putting your tracksuit on and coaching!”

And it can be even more complicated than that.  There is the scenario when you spend so long as a number two that you become  institutionalised in the role. You perceive yourself only as a number two and that can be tricky when you are suddenly promoted.

With Wasps and Wales, Edwards worked as Gatland’s right hand man for 15 years, which is why the move to France will be so fascinating.

Meanwhile, for the last four years Farrell has supported Joe Schmidt and loyally sung from the same Ireland hymsheet but it might be that Ireland now need a bit of shake up and some new ideas.

They might also benefit from a new voice but the main voice will still be the familiar soft Wigan accent of Farrell who in an attempt to impart a new message might need to contradict what he was saying just six months ago. Players notice these things.

That might have been an issue with Andy Robinson when he took over as the England boss in 2004 after six years as Woodward’s lieutenant. Robinson gets labelled as a natural number two but that rather ignores the fact that he coached Bath to a superb Heineken Cup title in 1998 which comfortably surpasses anything Woodward achieved at club level.

Robinson was doubly unlucky. He inherited an ageing team and had to contend with an RFU who bizarrely wanted to limit expenditure at the very time they should have again pushed the envelope to ensure England retained their world champions status.

When Woodward had enough of the blazers and walked away it wasn’t the smooth transition Robinson might have hoped for, in fact there was a degree of crisis management to heap on all the normal pressure.

There are further nuances in all of this. Let’s take Steve Hansen who, having served his apprenticeship as an assistant with the Crusaders, found it desperately hard going with Wales during his first foray into the main job. His tenure included that record breaking run of 11 straight defeats and when he returned to New Zealand it was to spend fully eight years as the lieutenant to Sir Graham Henry, a tenure that included great highs such as the 2005 Lions series and RWC2011, and the egg on face RWC2007 campaign.

Retrospectively giving Hansen the main job after RWC2011 was a brave call.  There is never much of a honeymoon period in New Zealand and it could have all gone horribly wrong. Farrell’s appointment – made well in advance when Ireland were riding high and closing in on a world number one ranking – doesn’t come without its risks either but we wish a good man well.