Guscott column: Smart All Blacks kick the Springboks into disarray 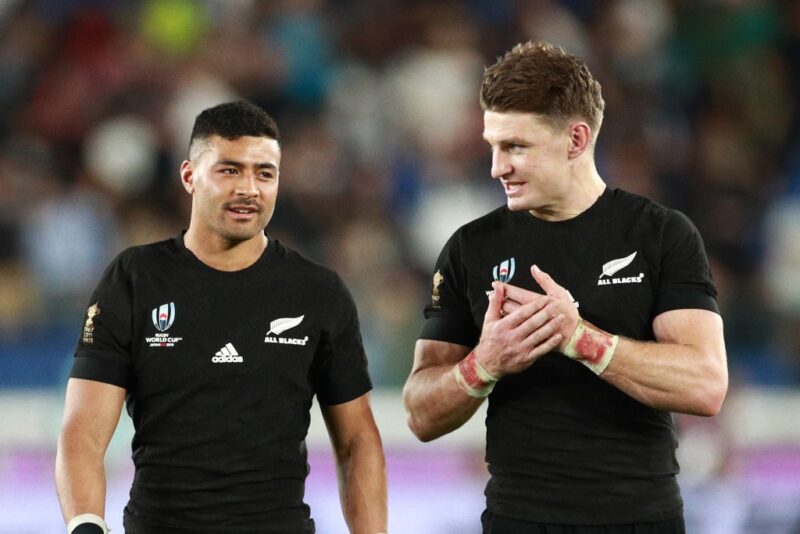 WHAT struck me most as New Zealand beat South Africa 23-13 in their showdown on Saturday was that planning your strategy behind-the-scenes is where coaches earn their corn, and it is where the Springboks fell short this time.

Exciting as Cheslin Kolbe, Makazole Mapimpi, and Willie Le Roux are as a back three, they do not have a reputation for being commanding in the air – and New Zealand exploited that to the full.

The South African back three were peppered with kicks, and Le Roux at full-back made mistake after mistake. It was the New Zealand of old finding a weakness in the opposition, applying the pressure, and exploiting the opportunities that came from it.

Both New Zealand tries came off South African errors. The first of them led to Richie Mo’unga getting the chance to put Sevu Reece away with a cross-kick before Beauden Barrett put George Bridge over, while the Scott Barrett try came directly from a Handre Pollard high-ball miss.

It does not sound like a huge error count, but it was made worse because when South Africa had their opportunities, if they had taken them in the same way as New Zealand did, then it would have been a lot closer.

The Springboks were nowhere near as accurate. For instance, the Le Roux pass to Kolbe in the second-half was a shocker, and although the wing picked it up, by then the cover had managed to get across.

If South Africa had put that chance away they could have been level, and have had momentum back in their favour going into the last 20 minutes.

In matches against New Zealand, you have to take your chances. Otherwise, you find yourself where South Africa did in the first half when they had all the territory and possession, but only three points on the board. Whereas, when New Zealand got a momentum swing, boom-boom, the South Africans found themselves 17-3 down.

Another problem was that it took South Africa 47 minutes before they realised that the New Zealanders were hardly putting anyone into some of the defensive rucks.

Well done to Pieter-Steph du Toit for spotting it and taking advantage to score the South African try, but it showed that when they don’t have the ascendancy they are too slow to pick up on where there are opportunities.

You would have expected that Faf de Klerk at scrum-half might have seen it, or that Rassie Erasmus would have sent a message on to his forwards to “please, please start to pick and go”.

The Springboks showed in patches that they have the forwards to win collisions, but now, if South Africa play New Zealand again, it will only be in the final – and they will have to be smarter than they were yesterday, and take their opportunities.

The South African tackling overall was poor, and the penalty count against them was too high, especially at the scrum.

Sometimes it takes coaches a while to work out why they’re being penalised at the scrum, but you’ve got to take action quickly if it happens. England had to do exactly that in the 2003 World Cup final, when the England props were being hammered by the South African referee, and Clive Woodward made a quick call to put Jason Leonard on.

The scoreline in Yokohama reflected New Zealand’s ability to seize the moment and capitalise on South Africa’s errors – but I still do not think that many teams can score tries like they did, mainly because their support play is unrivalled.

It’s incredible how often you see two or more New Zealanders right next to their try scorers, which demonstrates that their support play is at a different level to most teams.

New Zealand also demonstrated how important it is to be focused on the job in front of you, rather than looking ahead. They went into the game against South Africa, saying let’s show the world that we are still the best.

That’s why England need to forget about a semi-final against New Zealand, and just concentrate on their next game.

New Zealand will now not be challenged until the quarter-finals, and maybe not even then – although we know they will finish first in the Pool and play the second placed team in the Pool containing Ireland and Scotland.

You have to play your ‘A’ game to beat New Zealand, and South Africa did not excel in the way they needed to in order to win. I’m not saying the enormity of the game or the occasion was too much for the South African players, but I do not think their skills were good enough in the moment.

New Zealand coach Steve Hansen will be wary of the games between now and the quarter-final being seen as walk-overs by his squad, and will want to keep everyone switched on and occupied so that they do not become bored.

For Erasmus there are also areas he will have to sort out, starting with the scrum, which was poor by South African standards. He will get stuck in, because the line-out was also too predictable, and there are the issues around tackling and improving high-ball technique.

As for New Zealand using two play-makers, I don’t think Mo’unga is better than Barrett at 10, but Hansen has decided he needs his goal-kicking, and Barrett is such a gifted player he is not out of place at 10, 15 or 13.

It is a case of ‘England beware’ after the other big game of the day between France and Argentina – with their narrow loss leaving the Pumas in last-chance saloon when they play England.

My feeling is that the Pumas forwards are back on song, and perhaps the game against France has shown them that they do not have to play everything wide, because they nearly beat France by going old school and keeping it tight.

They might decide that is also their best hope against England – whereas for France it might be the opposite, because they looked reinvigorated when they ran the ball in the first half against Argentina and scored a couple of brilliant tries.

We know Damian Penaud is a great attacker, that Gael Fickou has been brilliant in the past, and that their young half-back pairing of Antoine Dupont and Romain Ntamack have got plenty of talent.

England need to make the most of their next two games to make sure they are ready for both their big Pool rivals.