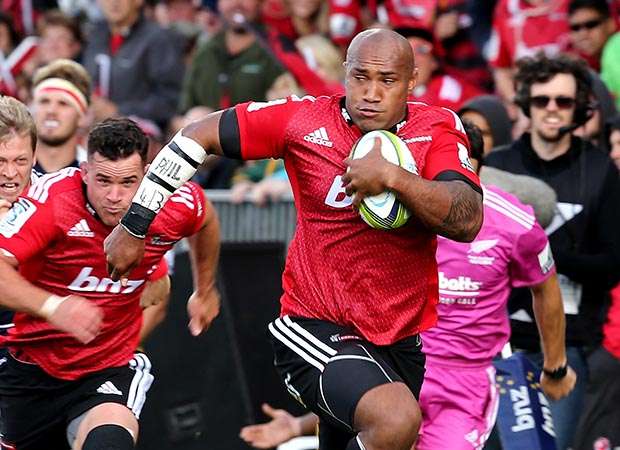 Fijian juggernaut Nemani Nadolo has England in his sights and intends to blow the World Cup wide open with victory on the opening night.

Nadolo – regarded as the Jonah Lomu of Fijian rugby – has become a huge star in the centres or on the wing for the illustrious Crusaders franchise in New Zealand and is ready to take the World Cup by storm.

Nadolo admits Fiji must play an almost flawless game to have any chance against England at  Twickenham but that does not faze the big man who is brimming with confidence three weeks out from the September 18 kick-off.

Fiji continue their World Cup preparations next Sunday against Canada at the Twickenham Stoop and Nadolo told The Rugby Paper: “I’m feeling in good shape after playing some good footy this year with the Crusaders.

“Now we’ve all come together and we’re trying to make sure we do well with Fiji. We’re happy to be in the Pool of Death. We’ll be looking to take our chances and we’re confident we can do well. We want to cause an upset and blow the tournament wide open.

“Winning the Pacific Nations Cup was a boost. I’m generally confident in our ability to win games. That’s the most important thing.

“A lot has been said about England, Australia and Wales and they are all top quality sides with great players. But if we pick the right combinations and play to the game plan set out, anything is possible.

“We just have to make sure we front up. If we do, we’ll be sweet.

“You can’t go into a game not confident – that’s when you’ll get shown up. We’ve worked hard these last few weeks and brushed up on fitness so we’re full of confidence.

Nadolo, 27, spent six months with Exeter Chiefs in 2011 and the 6ft 5in, 19st 12lbs powerhouse is pleased to see his former team-mates Henry Slade and Jack Nowell in the England squad.

And he backs Sam Burgess to star – in what could be a mouth-watering match up should Fiji deploy Nadolo up the middle.

“England are a quality side and look to have picked a powerful squad,” he added. “They’ve got big Burgess there and they’ve shown faith in him and I’m sure he’ll do very well and deliver.

“He’s the sort of athlete who can adapt to any environment. I’ve seen him play a lot of League and the big fella’ has got moves in Union too.

“I’ll probably line up on the wing as we’ve got Vereniki (Goneva) and Gabiriele (Lovobalavu) in the centres playing very well, but I’m happy to play wherever.

“It’s good to see Slade and Nowell get a call-up. When I had my time at Exeter they were just coming up through the ranks so it’s good for them and the club.

“It’s an awesome set-up at the Chiefs and they are only going to get better and be force to be reckoned with over the coming years.

“I enjoyed my stay at Exeter although game time was a bit scarce.

“Maybe one day I can come back and play in England – it’s definitely on the cards. I want another crack in the Premiership but I’ve got to find a club who want me first.”

Should Nadolo tear up the World Cup in similar fashion to how he’s ripped apart the best Super XV defences – he won’t be short of offers.