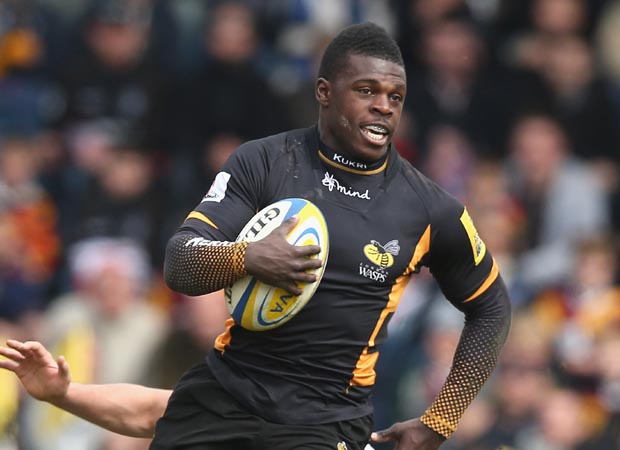 Premiership Rugby’s battalion of overseas stars have been warned that accepting a call to represent their countries in next season’s IRB Sevens World Series could throw their future employment prospects into severe doubt.
Next season’s nine Sevens World Series legs are doubling as 2016 Rio Olympics qualifiers and under the terms of an exemption to IRB Regulation 9 governing international call-ups, competing nations with Olympics aspirations such as Fiji, Samoa, South Africa, Argentina and the USA can summon any eligible players they choose.
This could present difficulties for a number of Premiership outfits. For example, the inclusion of Leicester Tigers pair Niki Goneva and Seremaia Bai would be hugely attractive to Fiji, while Tigers  wing Blaine Scully has proven Sevens pedigree with USA.
Saracens’ Chris Wyles would be another option for the States, while hooker Schalk Brits has already been courted by South Africa for inclusion in the upcoming Commonwealth Games and Marcelo Bosch would be a Sevens option for Argentina.


Northampton’s dynamic Samoan trio of Kahn Fotuali’i and George and Ken Pisi have previously played Sevens and could be a viable option for them, along with the likes of Bristol’s David Lemi and Ofisa Treviranus, of London Irish.
Premiership clubs are understandably edgy over the potential for serious disruption as a result of having top overseas stars picked off to play Sevens.
But Leicester chief executive Simon Cohen has warned that players must be careful.
He told The Rugby Paper: “We take into account, when negotiating and offering players contracts, their availability over the season. Therefore, it follows that if their availability is compromised, then so are their prospects.
“If we lost a player who was an integral part of our 15s set-up to a Sevens competition, it would be hugely disappointing.
“In fact, that would be an understatement, but everybody has their own agenda so there is a possibility it could happen.”
Citing the prime example of Scully, who recently agreed a new contract with Leicester, Cohen added: “Blaine’s an outstanding Sevens player but he has been working hard at Tigers to thrust himself into our first team selection pool.
“It would be a difficult decision for him if it meant that for a number of matches he wasn’t available to compete for a starting slot.
“If you took him out of our environment and into Sevens, it would clearly hamper his selection prospects and his progress at Tigers.
“All nations need to work out what their priorities are, whether it’s to grow the 15-a-side game or Sevens, but if they pick players for Sevens and take them out of the 15s for any period of time, it will compromise their chances in 15s.”
The Regulation 9 exemption also throws up a conundrum for England Sevens, who are likely to be nominated as Great Britain’s qualifying representatives and must achieve a top-four World Series finishing position to make it to Rio.
Failure to do so would mean Simon Amor’s team having to compete in a second round of qualifiers next summer, meaning the England Sevens boss will be under huge pressure to select the best available players from the Premiership.

Negotiations are underway and are said to be cordial but, in theory, Amor could choose top stars like Christian Wade, Tom Varndell, Tom Croft, James Haskell or David Strettle and their clubs would be obliged to release them.
A Premiership Rugby spokesman told TRP: “We are in the middle of amicable negotiations with the RFU over the release of players for next season’s Sevens World Series.”
Meanwhile, Australia and New Zealand are preparing to unleash their big guns, either in Olympic qualifiers or at the Olympics themselves.
Australia are understood to be toying with calling up Israel Folau, Michael Hooper, Jesse Mogg and Kurtley Beale, while Olympic favourites New Zealand may well employ the services of Sonny Bill Williams, Ben Smith and Julian Savea.
Former England Sevens coach Russell Earnshaw told TRP: “Australia and New Zealand will both get supported by their Unions and I wouldn’t be at all surprised to see quite a few of those players competing this coming season.
“If Australia were to field Folau, Hooper and Beale, you’d go ,‘Oh my God!’
“It would be the same with New Zealand and I think there’ll be an absolute bun-fight to finish in the top four. England will be under huge pressure to do that.”
NEALE HARVEY