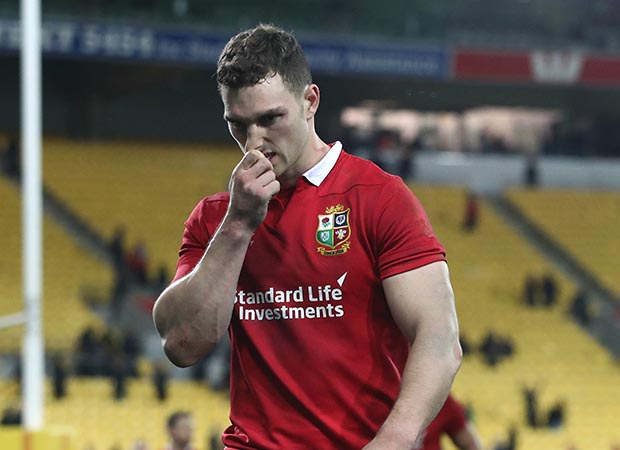 Ever since the early days on Anglesey, George North had been used to clearing obstacles at high speed in a manner reminiscent of Edwin Moses. The untouchable American 400-metre hurdler won more than 100 consecutive races over a period of ten years. North had sailed through seven seasons despite interruptions caused by alarming blows to the head when a trip on a rainy night in Rotorua led to the first setback of his sporting life.
His inability to deal with a chip from one All Black, Nehe Milton-Skudder, gifted a try for another, Liam Messam, on behalf of the New Zealand Maori.  The incident left the Lions thinking the unthinkable – that North was no longer good enough for the Test team.
Not so long ago such a conclusion would have been viewed as a monstrosity on the scale of the man himself.    Since then he has had a break, taking in Wimbledon and the British Grand Prix, then heading home to the National Eistedfodd at Anglesey where they initiated him into the Gorsedd  in his Bardic name, Sior o’r Gogledd.
Eleven weeks on from losing his rotor in Rotorua, the Premiership season opened yesterday with North conspicuous only by his absence. While two others who bore far heavier loads on behalf of the Lions, Taulupe Faletau and Anthony Watson, resumed domestic business as normal, North found himself excluded from Northampton’s 23 against Saracens at Twickenham.
Despite declaring himself fit, his failure to appear in the Saints’ pre-season games explains the club’s decision to wait for a sizzling North instead of a half-baked one. He has until the middle of next month to answer Welsh anxiety over his form.
For the first time North has a fight on his hands to make sure they do not start the autumn series without him. If there were times when he was chosen on reputation, that luxury has been washed away as a direct consequence of what the Lions achieved in New Zealand.
The Welsh landscape has to change accordingly.   If Warren Gatland is serious about making Wales an attacking force like the Scarlets, Liam Williams has to be the full-back even if that means Leigh Halfpenny taking his chance as a wing, his original position.
Steff Evans’ belated rise during the summer tour and Hallam Amos’ return from long-term injury has gone some way towards easing fears of the Welsh wing cupboard looking ominously like Mother Hubbard’s.
Keelan Giles, still in his teens, will see this as the season when he wins the cap inexplicably denied him against Japan last year.   Alex Cuthbert, for all his defensive frailty, is a proven finisher and still an integral part of a Wales squad where big wings are appreciated more than smaller ones.
North at the top of his game will supersede all those factors except that North has not been on top of his game for a while, not since tearing Ireland asunder in Cardiff last March.  Subtract the two tries he delivered that day and his total from his last 17 appearances for Wales shrinks to five.
His overall strike rate doesn’t come close to some contemporaries.  Israel Folau has 28 from 57 Tests for Australia, Ben Smith 29 from 64 for the All Blacks, Julien Savea 46 from 59 for the same team.
North’s 30 from 76 falls a long way short of one try in every two games.    Chris Ashton managed that (19 tries in 38 matches) and England were so impressed that they have not picked him for more than three years and have no obvious intention of doing so again.