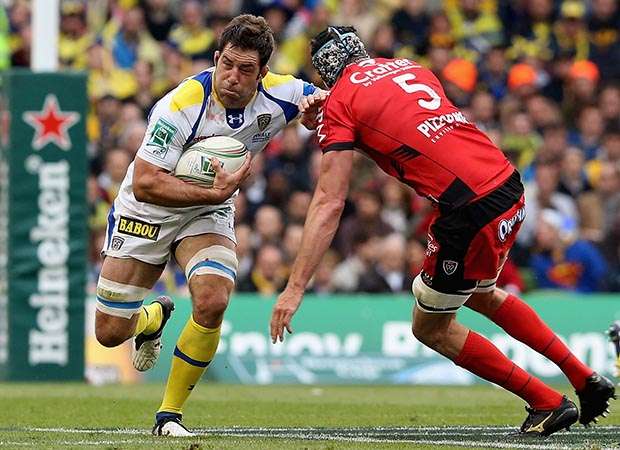 Jamie Cudmore has hurled himself into a crusade this season on behalf of rugby players all over Europe, to raise millions for the proper treatment of concussion. If his ambitious initiative succeeds in tackling the most alarming single health issue in the game, the fearsome Canadian bear will have done more than anyone in France to prevent vulnerable players from being exposed to unnecessary further risk of brain damage.
Cudmore’s Rugby Safety Network, a non-profit organisation, is designed to educate clubs and schools at all levels on concussion as well as providing legal advice and financial assistance for victims. Its creation is a direct consequence of Cudmore’s experience last year and his determination to ensure no other player goes through what he went through.
On April 18, 2015, Canada’s World Cup captain lined up for Clermont against Saracens in the European Champions’ Cup semi-final at St Etienne. What happened to the ex-lumberjack from Squamish in British Columbia is not for the squeamish.
“Early on I was involved in a clash of heads with their No.8,’’ Cudmore told The Rugby Paper. “I thought, ‘Jeez, that was a big one’. I was bleeding and pretty much out of it. The doc could see that.
“I was taken to the changing room for a HIA (head injury assessment). I didn’t pass the cognitive test. I wanted to play on, as players always do but the doc was adamant, ‘no, you’re done’. I tried to tell him I was okay and he said, ‘no, no, you’re done – your game’s over’.
“I started to take my boot off and then the doc came rushing back into the changing room. He said that my second row partner was struggling and they needed me to get back onto the field right away.
“So I put my boot back on and within five or, at most, ten minutes, I was playing again as though nothing had happened. Two weeks later I played in the final against Toulon. Hindsight being 20-20, I can see now that I should not have played. I thought I’d done everything right. I’d seen a neuro-surgeon three times but with concussion you never know when you are right. I definitely did not feel 100 per cent right going into the final.
“I came off twice, in the first half because of what I subsequently found out to be the effects of what they call second-impact syndrome. Then I had to come off again in the second half for blood. I vomited in the changing room in front of other players and yet I was allowed to continue playing.
“I didn’t realise then that you’re supposed to have a three-week stand-down period after a head injury. That’s why, just after the World Cup last season, I took a legal letter to the club (Clermont) because I wasn’t happy with my treatment. It was totally against the rules and regulations.
“At the meeting, two managers, two doctors and a coach sat on one side of the desk. They put me on the other side and each one tore a strip out of me.
“I had one guy say that it was almost as if I was being a traitor to the club for saying what I said. And that was about something I said privately, not publicly.
“They were extremely angry. The general manager walked out of the meeting. He obviously had something more important to do.
“They seemed almost affronted that I had raised the issue and called it into question. The damage had been done in my case. I was doing this in the hope that it wouldn’t happen to anyone else.
“I wasn’t raising the problem to attack them but that was the way they saw it, hence their reaction. It was too bad the meeting ended up like that but that’s how it’s been left, for the moment.’’
Cudmore, at 37 starting a two-year playing contract with Oyonnax, makes no bones about being “badly treated”.
“After the final last year, I had all kinds of symptoms – headaches, loss of sleep, mood swings. I took three months off to recover.
“Clubs only respect the bottom line which is winning, filling the stadium, avoiding relegation. They will only react if the league do something serious, like deducting points. Then the clubs will start to change their attitude otherwise they will go on fobbing you off.
“Doctors promise to err on the side of caution. Then someone gets rattled by a blow to the head and he’s almost straight back on. That cannot be allowed to continue.
“World Rugby has made concussion a big catchphrase but France is lagging behind the other countries. In Britain, Ireland and North America, the attitude is different and all the better for it. There, the experts are asked if the player is okay. Here, the player is asked and every player always wants to get playing again. The doctor’s first concern has to be for the player, not the team and to hell with what anyone else thinks. The player has to be protected from real danger at all times.
“Our foundation needs some serious funding. Once we’re up and running, we will hammer home one message in particular to all players, especially the younger ones.
“They need to know that leaving the field after a knock to the head is not a sign of weakness. They have to be made aware that concussion can strike at any time and that it’s okay to say, ‘I don’t feel right, I have to get this checked out right away’.
“Too many clubs in France put pressure on players with head injuries to get back as fast as possible. Even with all the publicity, the old-school attitude still exists. They splash a bit of water on your face and they tell you, ‘you’ll be fine, the game’s the important thing’.
“They’re wrong.  The player is the important one….’’