Phil Greening is concerned that Great Britain, and their qualification nominees, England, are taking the wrong road to Rio.
The former Lions and England hooker, who won a Commonwealth Games Sevens silver medal with England in 2006, and also four back-to-back Hong Kong Sevens title – two as a player and two as a coach – believes GB are jeopardising their hopes of winning the inaugural Olympic Sevens title in 2016 because of the lack of clarity in their approach.
Greening, who is currently assisting former England Sevens coach Mike Friday in coaching the USA Sevens team, says that with the Las Vegas leg of the HSBC World Series currently underway, with England in fifth position, the pressure is building.
England will ensure that GB qualify automatically for the 12-team Olympic tournament only if they finish in the top four of this year’s World Series. As things stand, their form does not suggest they are favourites to overhaul the four teams ahead of them – South Africa, New Zealand, Fiji and Australia – and this was emphasised when a defeat by Canada followed a win over Argentina in the Las Vegas pool stages.
The problem, according to Greening, is that where rival nations are gearing-up to go for gold in Brazil, no-one is clear about the GB strategy.
This is the remit of Joe Lydon, the former GB Rugby League star, and former England Sevens coach, who was appointed as the RFU’s head of international player development last year after doing a similar role for the Welsh Union for five years.
“The Aussies are in fourth, and England will be hoping to overhaul them, but they are taking it very seriously and will be fully loaded to qualify for the Rio Olympics,” Greening warns. “The Australian Union’s chief executive (Bill Pulver) has said already that they are going for gold, and that they will pay the contracts of top players like Israel Folau if they opt for Sevens after the 2015 World Cup.”
He adds, “There are signs that the South Africans are heading in the same direction, and the New Zealand Sevens coach, Gordon Tietjiens, is expecting Sonny Bill Williams to make the switch after the World Cup, with Julian Savea also considering it.”
Greening says that England’s bolt-hole route into the Rio tournament through a European repechage could also be fraught with danger with the French talking about beefing-up their Sevens programme with 15-a-side stars.
“France are making noises about introducing guys like Wesley Fofana, and if that happens they could go up a few gears and make life difficult, so there are no certainties.” 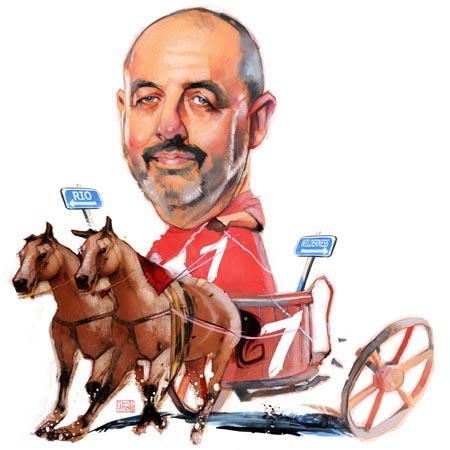 Greening says that this makes it imperative that England, and GB, deliver a clear strategy rapidly. “The worrying thing is that this is dragging on. The leading Sevens coaches here had conversations with Joe Lydon years ago, but we are still no clearer on how the GB team will be constituted. I’m concerned that GB are not doing enough – or, that if they are, no-one knows about it.”
He identifies the main problem as England’s decision to rely entirely on Sevens specialists, drawn mainly from Championship level players, and below, while other nations see the abbreviated code as an elite development programme.
“The top nations still see it as a 15s-7s pathway, especially New Zealand, who have had 50 All Blacks come through Tietjiens Sevens side. When Mike Friday and myself coached England Sevens we had 30 players who went on to win full England caps, including the likes of James Haskell, Chris Robshaw and Mike Brown.”
Greening says he feels sorry for incumbent England Sevens coach, Simon Amor, who was also a team-mate in his playing days. “Simon’s picked up a lot of baggage. The relationship between the RFU and the Premiership clubs is not great (when it comes to Sevens), and where we had a good relationship with the Premiership directors of rugby and got access to quality players, Simon has a massive battle because we’ve had five years of that 15s-7s pathway being broken.”
Greening sees this as a serious strategic error. He says: “There is so much talent in the English game that never gets played. Sevens is so much better at developing young players than an A League which is on and off.”
When you look at just how few of the England U20 backs and back-row forwards who won the 2014 Junior World Championship are engaged in the England Sevens programme, Greening’s point is pushed home. Why, for instance, isn’t a young finisher of Nathan Earle’s quality cutting his teeth in big stadiums against high calibre opposition?
The benefits are as mutual as ever according to Greening. “The physical levels in the top Sevens sides are way above those in the Premiership. I was telling an England player only the other day that whereas a score of 18.5 in Yo-Yo tests (intermittent endurance tests which have superseded bleep tests) is the benchmark in the Premiership, in Sevens squads it is 20 to 21.”
When I spoke to Lydon in August he was reluctant to deviate from the policy of using England’s Sevens specialists as the players to deliver qualification, and to then press for the big prize in Rio. It looked like a limited strategy then, and it does not look much more inspired now.