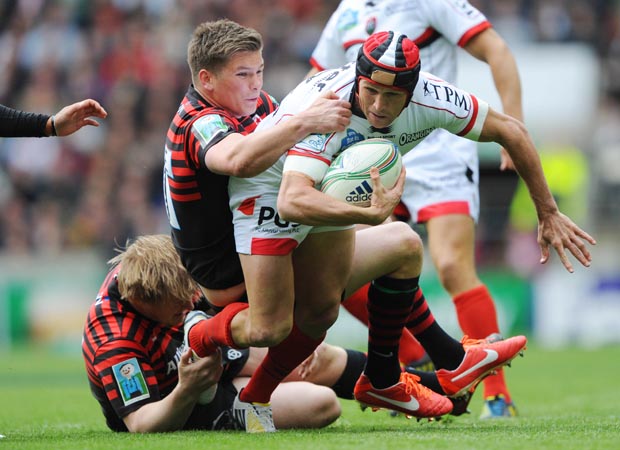 Rob Baxter is in the unique position for an English coach of having done the surgery on the victims-in-common of Heineken Cup finalists Saracens and Toulon. Namely, his own side, Exeter Chiefs. The Chiefs suffered home and away defeats in the Premiership by Saracens, while also going down twice to reigning European champions Toulon in the back-to-back pool stage of the 19th and last edition of the Heineken Cup.
That said, despite their wounds the doughty Devon side were not embarrassed at any stage, making life uncomfortable for both Heineken Cup finalists at Sandy Park, where they eventually lost to Saracens 16-9, and Toulon 14-9. The away matches were also hard fought with the Chiefs going down by 12 points to Toulon at the Stade Mayol in December (32-20), and then 13 points against Saracens at Allianz Park in February (23-10).
Baxter’s view is that the Anglo-South African cocktail that Saracens have come up with is such dynamite that the Toulon all-stars – themselves a highly potent international blend – could be left legless by the end of Saturday’s bash at the Millennium Stadium.
The Chiefs head coach says that in a final which is too close to call in many respects, there have been developments this season that have made Saracens a more dangerous animal than they were when they were beaten 24-12 by Toulon in last season’s Twickenham semi-final.
Baxter says Saracens’ astonishing 46-6 semi-final demolition of Clermont on the same ground at the same stage a year later pinpoints the physical power brought by key signings like No.8 Billy Vunipola and tighthead James Johnston, and the way their improved squad depth allows them to peak at the end of the season. He also says that by matching their wolf pack offensive defence by ripping into their opponents in attack, they have every chance of avenging that loss to Toulon.
“Saracens are very capable of winning. What they have shown over the Premiership is that they have squad strength and will make big changes to a winning side. That gives them an energy, edge and vibrancy which makes them very effective. Saracens are a top-notch defensive side – Paul Gustard has done a fantastic job there – but they are not just about defence any more. They also have the confidence to have a go, and this season they had become an exciting team who can unleash the attacking part of their game. That is the challenge for both the sides in Saturday’s final.”


He continues: “There are so many parts of the Saracens game that work and when it all clicks with intensity, they are very good. In the game against Clermont they had a great start with the early try and the yellow card try, and also, with the advantage of the game being played in England, the pressure mounted. However, you still have to be good enough to exploit the slight lack of belief that situation would have instilled in Clermont. They are a very good French side, and they have been in tough places and come through successfully – but Saracens showed that they are a team that can ruthlessly make the most of any advantage.”
Baxter says nobody reflects that ruthlessness more than Jacques Burger, with the Namibian openside making a huge contribution since recovering from a career-threatening knee injury which kept him sidelined for most of last season: “Burger has been outstanding in intensity and physicality – and he beat that Clermont performance (27 tackles) when he played us at home and was in full lumberjack mode, making 30 tackles!”
He also takes his hat off to the Saracens players, and director of rugby Mark McCall and his team of coaches, because of the way they have learned lessons from last season and adapted and improved so quickly.
“Billy Vunipola has been excellent as a go-to ball carrier, Owen Farrell has had a great season, Steve Borthwick looks as if he could play for another five years, and both scrum-halves (Neil de Kock and Richard Wigglesworth) look very comfortable with the game plan. They have a lot of good players at the top of their game.”
He adds: “They are now a very dangerous team because they have a number of game breakers making an impact. Whether it’s Schalk Brits or Chris Ashton they have that capability, and against Clermont it was interesting to see how they linked as they moved around.”
Baxter also spies a rare Toulon weakness to be probed: “Where they might have the edge is that the Toulon lineout has been shaky, whereas Saracens have a very high set-piece success rate.”
The Chiefs coach is fascinated by the tactical joust to come in Cardiff. “It is going to be a very interesting final, and we know from experience at Exeter that it’s not easy to keep the ball against either of them. There was a clash of styles in last year’s final between Clermont and Toulon, with Clermont doing most of the attacking and Toulon most of the defending. However, this time Saracens play in a similar way.”
He says that Toulon’s ability is an almost rope-a-dope strategy which turns defence into attack in a flash.

“Toulon’s real ability is a snapping change of tempo when you make an error or they win a turn-over. They can soak up a lot of pressure and not be stressed, and then suddenly they switch up a gear and create scoring opportunities – which is what they did to Clermont in last year’s final. Toulon are very physical at the breakdown and they have a number of individuals who can hurt you from nowhere on the counter-attack. They can also set-up pressure positions and squeeze you, and are capable of striking in very little space.”
Baxter identifies the midfield trio of Jonny Wilkinson, Matt Giteau, and big Mathieu Bastareaud as the Toulon ring-masters, with the Devon-raised Armitage brothers offering them two strike-runners, Steffon in the back-row and Delon in the back-three.
He says the little Aussie play-maker, Giteau, is a constant threat: “He was a key guy in our two games. He made the incisive break in the away game, and at Sandy Park he changed the game when we had been going well for most of it. You think you’ve got Giteau, and all of a sudden he’s five metres behind you and they are up and running. He and Wilkinson are a dream combination. Add Bastareaud and you have a special trio, because he can make a break or run over the top of you. If you can rein them in you have a good chance.”
He continues: “Steffon Armitage gets massive credit carrying, and he is very good over the ball. With their ability to make stop tackles on the gain-line Toulon create a lot of opportunities for him on both fronts. If you look at his carrying stats he is very effective, and he looks purpose-built for Toulon, because the rest of a very good pack of forwards set him up. Delon at his best is absolutely sublime. Although he’s had the odd discipline issue he’s a good Devon boy, and a lot of it is just because he’s very competitive. Sometimes that can be in a negative way, but when it’s positive he’s a fantastic player.”
Baxter adds that Bernard Laporte and his coaching team have been constructive in their approach to the Armitages: “Great credit goes to Toulon for bringing in guys like that and then finding pivotal roles which bring out the best in them.”
He also believes that Jonny Wilkinson’s influence at Toulon is sometimes underestimated by commentators on this side of The Channel.
“The first thing is that if you have a fly-half kicking a lot of points, as Jonny does, then generally it means he is organising the attack and defence effectively because his team is getting pressure
positions in the right place at the right time.
“That means he’s having a very good game. Wilkinson is masterminding a lot of what goes on at Toulon, and although most of his points come from goal-kicking, he is still a dominant fly-half controlling the game. He’s brought that ability to capitalise on pressure.”
Baxter says that both clubs deserve praise, despite the financial advantages they enjoy, for moulding squads assembled from all corners of the globe into exceptional teams battling for Europe’s big prize. “Sure, both teams have huge budgets, but that doesn’t win you a Heineken Cup.”
His view is that either side would be worthy winners, but he is clear about his own allegiance: “If I hang my hat on anything, I go with Saracens. They’ve had a great season and they are looking in great nick going into these big games. On top of that, I’m an Englishman and I want English clubs to win things.”
Baxter believes also that as a club which has adapted to playing at numerous different venues before finally settling at Allianz Park, that Saracens could have a trump card.
“They seem to have no trouble at all going on the road, so having the game in Cardiff could be an advantage. When you see them in games at Wembley or Twickenham they have a knack of seeming like they are the home team. They are also a team that look as if they can come out and play in pressure games.”
The Clermont semi-final is testament to that, and if Sarries bring a performance like that out of the locker in Cardiff we could see the crowning of the first English European champions for seven years.