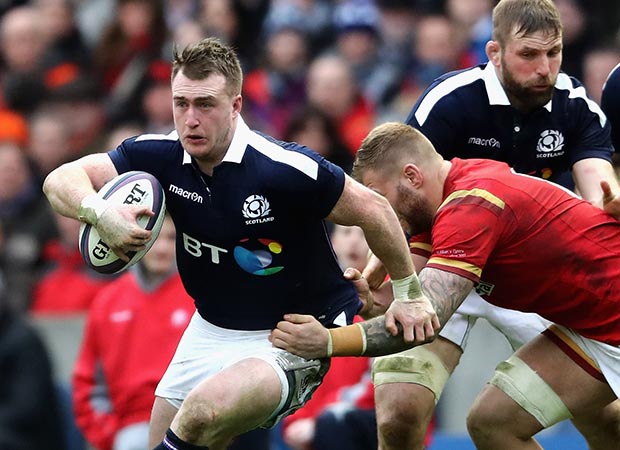 Stuart Hogg is the name on everybody’s lips as the candidates for full-back in the 2017 Lions tour party showcase their talents in the Six Nations. The Scottish No.15’s rocket-fuelled acceleration and sumptuous array of handling and kicking skills – encapsulated by the two spectacular tries he scored in Scotland’s victory over Ireland – have put him in pole position.
He added to his glowing reputation as the Scots secured their second win from three with victory over Wales in Edinburgh this weekend. The match brought him head-to-head with Leigh Halfpenny, above, the incumbent Lions Test full-back whose superb goal-kicking and safety under the high ball made him indispensable in the 2013 series victory in Australia.
Where Hogg again produced magical touches against the Welsh, putting Tim Visser clear with a devastatingly quick take-and-give in one motion, Halfpenny brings greater security at the back as well as world-class marksmanship.
The Scotsman’s only Achilles heel is that defensively he can sometimes be outmanoeuvred too easily, whereas Halfpenny will need to work on his attacking game if he is to retain the test jersey.
When it comes to aerial combat there are few better than Mike Brown, and his experience of playing in New Zealand on England’s 2014 tour gives him an invaluable insight into what the Lions will face. The same is true of the evergreen Rob Kearney, who is the most experienced international 15 of the four, and was also part of the Ireland side that brought the All Blacks record winning run to a halt in the autumn.
There is a Titanic battle underway to fill the position vacated by Alex Corbisiero, the replacement England prop who made such an impact for the Lions four years ago in Australia before being forced into retirement by injury.
At the time his understudy was Mako Vunipola, below left, the Saracens loose-head who has since gone on to become a core component in the red rose pack that secured a Six Nations Grand Slam and and away series victory in Australia.
Vunipola is the embodiment of the running-handling ballplayers required at loose-head, and with the gains he has also made as a scrummager he remains at the top of the list for the 2017 Lions tour of New Zealand. His main challenger is the Irish and Leinster powerhouse Jack McGrath, below, who is a punishing scrummager as well as an elemental force in the loose.
The Wales loose-head Rob Evans will also push hard for inclusion having returned from injury to make a favourable impression against England.
Like McGrath and Vunipola he is comfortable on the ball, and that will be a crucial component against a New Zealand team whose tight-five handling skills are exceptional.
Scotland’s Gordon Reid and Allan Dell are making steady progress, while England have another candidate in Joe Marler, who is getting stronger with every game after returning from injury. Ireland also have the experienced Cian Healy challenging McGrath for his starting spot.